Why did Mumbai Indians qualify for IPL 8 Final?

The Mumbai Indians defeated the Chennai Super Kings in Qualifier 1 thereby securing a place in the Final of IPL 8. DESIblitz analyses why they were victorious.

The platform was built by Lendl Simmons and Parthiv Patel who put on 90 for the first wicket.

The second seed Mumbai Indians beat the first seed Chennai Super Kings by 25 runs, in Qualifier 1 of the Indian Premier League (IPL) Playoffs, on Tuesday 19th May 2015, at the Wankhede Stadium in Mumbai.

The result left the Wankhede crowd ecstatic. They had provided such an electric atmosphere and definitely played their role as Mumbai’s twelfth man.

With their victory the Mumbai Indians booked their place in the final of IPL 8. DESIblitz brings you the analysis from Qualifier 1 of the IPL Playoffs, and explains why Mumbai were the victors.

Mumbai captain Rohit Sharma won the toss and chose to bat. In retrospect this turned out to be a crucial factor in the match.

As it turns out, Mumbai put up a sizeable total of 187-6. They got off to such a flying start that at one stage they looked like they would have reached a total of 200-plus. Nevertheless, the total turned out to be formidable. 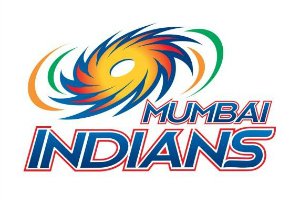 The Mumbai Indians batted well in partnerships. The platform for the successful innings was built by Lendl Simmons (65) and Parthiv Patel (35), who together put on 90 for the first wicket.

Simmons was particularly audacious with this strokeplay as he scored his 65 in just 51 balls, at an impressive strike rate of 127. His three fours and five sixes delighted the Mumbai crowd and the TV audience.

This is exactly what you need from your overseas players. It can be particularly frustrating for an IPL franchise when you spend a lot of money on foreign talent and it does not reap dividends.

Luckily for the Mumbai Indians, the contribution from Simmons, and his West Indian counterpart, Kieron Pollard, was worth every penny.

3. Pollard sees out the innings

After making an impressive start to their innings, the Mumbai Indians lost three wickets for 26 runs. When the wickets of Team India star Rohit Sharma and Hardik Pandya fell in quick succession, the momentum looked like it had swung to the Chennai Super Kings.

Kieron Pollard entered the arena. He did not as much as steady the ship, as sail away at a rate of knots. He hit one four and five sixes for his 41 off only 17 balls, at a whopping 241 strike rate.

His most impressive shot was a nonchalant flick of the wrists, down the ground for six, which a not even a flying Faf Du Plessis could prevent.

He saw out the remainder of the innings and was a massive factor in Mumbai posting their final total of 187-6. 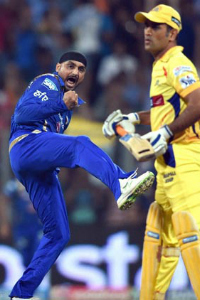 It was crucial that the Mumbai Indians got off to a good start with the ball. And Lassith Malinga proved to be the right man for the job.

At both the start and end of an innings, Malinga’s slingy action, scintillating pace, and accuracy, make his yorkers in the blockhole very threatening.

Malinga provided Mumbai with their breakthrough with his fourth ball. Although the umpire’s decision may have been dubious, he trapped Dwayne Smith lbw, leaving Chennai 0-1.

He finished the innings with three wickets for 25 runs from four overs, at an economy of 5.75 runs.

However, Harbhajan Singh struck twice in successive balls. First he caught and bowled pinch hitter Raina. The next ball, he got Super Kings captain fantastic MS Dhoni out lbw, and duly celebrated with a karate kick.

After having missed out on a hattrick, he dropped a catch on the final ball, which could have given him his third wicket of the over. Had he held on, it might just have been the best over in the whole tournament.

The Mumbai Indians enter the final of IPL 8 as a team in incredible form. They have won nine of their last 11 matches.

The winner of the IPL Playoffs Qualifier 1 has gone on to win the Indian Premier League three times in the last four years. This statistic would make the Mumbai Indians favourites to be IPL Champions.

Following this loss, Chennai Super Kings captain MS Dhoni will return to his home town of Ranchi for Qualifier 2, at the JSCA International Stadium, on Friday 22nd May 2015.

Chennai will play either Royal Challengers Bangalore or Rajasthan Royals, who face off in the Eliminator at MCA Stadium in Pune, on Wednesday 20th May 2015.

The Final of IPL 8 will take place at Eden Gardens in Kolkata on Sunday 24th May 2015.