Sri Lanka beat West Indies by twenty-seven runs under the Duckworth-Lewis method to reach the 2014 World T20 final. West Indies were 80-4 when the game was officially called off after a heavy downpour of rain.

"It will be ideal to win the title and go back home.”

Sri Lanka have made it through to the 2014 World T20 final after a twenty-seven run win over defending champions West Indies via the Duckworth-Lewis method.

West Indies reign as T20 champions came to an abrupt end in the first semi-final at the Shere Bangla National Stadium in Dhaka on 03 April, 2014.

Marlon Samuels scored just 18 off 29 balls as West Indies were restricted to 80-4, before rain, lightning and hailstones forced the match to be called off.

In a repeat of the 2012 final, West Indies were aiming to become the first side to defend the T20 World Cup. 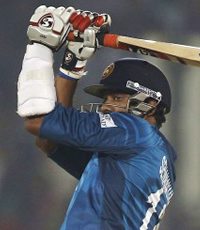 Leading into the match, the official captain of Sri Lanka, Dinesh Chandimal was dropped from the team due to poor form. This was quite a bizarre, yet brave decision to leave out the appointed captain for such a big match.

Lasith Malinga continued to lead the same side, which also beat New Zealand during the Super 10 stage. Sri Lanka won the all important toss and made a great start with the bat. Openers Kusal Perera and Tilakaratne Dilshan helped the Emerald Islanders to forty-one without loss.

But once Perera was bowled out by Krishmar Santokie for twenty-six, Sri Lanka saw a mini collapse. Mahela Jaywardene who will retire from world T20 cricket after this event was run out by Sammy for a duck without facing a ball.

Samuel Badree claimed the ultimate prize of Kumar Sangakkara as the wicket keeper batsman chipped the ball straight to the bowler after making only one run. Three wickets fell within the space of eight runs to leave Sri Lanka on 49-3.

West Indies had a little scare when Chris Gayle limped off when a Marlon Samuels throw missed the stumps and hit the opener at some speed. Lahiru Thirimanne and Dilshan (39) then briefly rescued Sri Lanka with a partnership of forty-two runs, before the Dilscoop inventor was run out by Lendl Simmons. 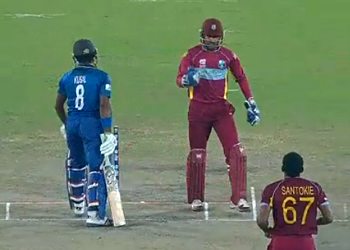 After adding a further thirty runs with Mr dependable Angelo Matthews, Thirimanne was caught at point by Simmons off Santokie. Though Thirimanne hit a well timed 44 off 35 balls, Sri Lanka were still not out of the woods.

But as usual Matthews hit some lusty blows in the end as Sri Lanka scored thirty-two off the last two overs. Dwayne Bravo took a brilliant catch at deep midwicket off the last ball to dismiss Matthews for a wonderful 40 off 23 balls.

Andre Rusell paid the price for some poor bowling at the end. His last over went for fifteen runs as Sri Lanka reached a total of 160-6 in their twenty overs.

Set a target of 161 at 8.05 runs per over, West Indies knew they had to start well to make a game of this. Chris Gayle who had recovered from a little niggle in the field came into bat with Dwayne Smith. The duo had a fairly promising start, before Lasith Malinga struck twice in the fifth over to dismiss both openers. 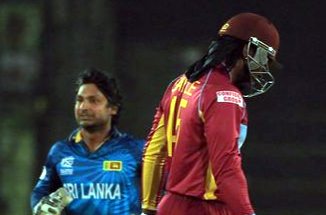 In a strange innings, Gayle scored just 3 off 13 balls, before he was bowled out by a Malinga slower delivery. Malinga then bowled a ripper to Smith, which went through him to hit the top of middle stump to leave West Indies on 28-2.

Bravo who was desperate to get his side going hit three 4s and one six. But with no runs coming at the other end from Samuels, Bravo (30) was caught brilliantly at deep midwicket by Jayawardene.

West Indies captain Darren Sammy who joined Samuels at the crease had no time to make an impact as a gust of wind soon turned to a thunderstorm. With rain pouring down heavily, spectators ran for cover. As the hailstones lashed down, even the ground staff left what they were doing and headed for safety.

The match was called off after forty-five minutes of continuous rain. Thus Sri Lanka reached the final as they won the game by twenty-seven runs on the Duck-Lewis method. 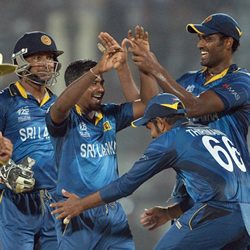 “But I am sure if you look at all the games we have played, there are more than 27 dots,” he added.

Player of the match, Angelo Matthews speaking of his team’s effort said:

“It is all the hard work that the boys do. I think they have been managed pretty well. When you play the intensity every other day, it takes a lot out of you. You need to manage yourself and still work really hard.”

He continued: “It will be ideal to win the title and go back home.”

West Indies will feel a little hard done by mother nature, but given the situation it was a tall order for them to win this match. Contrary to what Sammy said, West Indies did play with a negative mind set. When chasing a big total, you cannot afford to waste too many balls.

Sri Lanka awaits the winner from the second semi-final between India and South Africa on Friday 04 April, 2014.

Faisal has creative experience in the fusion of media and communication and research which increase awareness of global issues in post-conflict, emerging and democratic societies. His life motto is: "persevere, for success is near..."
West Indies reach 2014 World T20 Semi-Finals
India reach 2014 World T20 Cricket final