"Sri Lanka this is for you. I am glad the whole team did it for Sanga and Mahela."

This was a perfect farewell for Sri Lanka’s two most iconic players, Kumar Sangakkara and Mahela Jayawardene who were both playing their final T20 International. 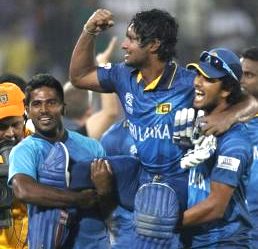 Sangakkara who was awarded the man of the match for his unbeaten 52 off 35 balls, said: “It’s been a long time coming. Waited five finals. Pretty happy I was able to do something for our team. It means a lot to all of us. We are very humbled by this.”

Virat Kohli’s 77 off 58 balls went in vain as Yuvraj Singh’s mediocre innings and the law of averages finally caught up with Team India.

The final was played in the presence of three important Englishmen – Paul Farbrace, the coach of the Sri Lankan team and the two on-field umpires, Richard Kettleborough and Ian Gould.

Following a brief rain delay, Sri Lanka won the toss and elected to field first. This was a good toss to win, as the conditions were quite favourable for the fast bowlers early on.

India could not get off to a good start as opener Ajinkya Rahane (3) trying to play a pull shot was bowled out by Angelo Matthews to leave the Men in Blue on 4-1. Rohit Sharma and Virat Kohli took some time to get going, but when they did India began to look dangerous.

Sri Lanka could have put the breaks on India, but captain Lasith Malinga dropped an easy catch of Kohli on eleven. Kohli made the Emerald Islanders pay, giving some much needed impetus.

Just when he started to look good, Rohit attempting to go inside out was caught by Sachithra Senanayake off a slower delivery from Rangana Herath. This was the second consecutive time Sharma was out in the twenties as he scored 29 off 26 balls. 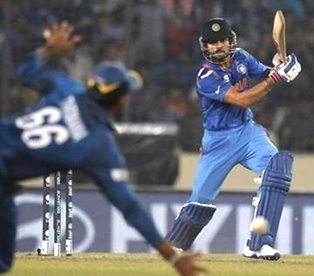 At this point of time Kohli was single handily taking India to a big total as he notched up his 50 off 43 balls. Yuvraj Singh failed to get bat to ball, scoring just 11 off 21 balls. The Indian fans were seen celebrating when he was caught at long off by Thisara Perera from a full toss delivery bowled by Nuwan Kulasekara.

Sri Lanka’s bowling came alive at the death as Malinga and Kulasekara bowled fantastic unplayable yorkers. MS Dhoni also failed to rotate the strike for India as Kohli was run out for seventy-seven off the last ball of their innings.

In the last four overs Sri Lanka only conceded nineteen runs, as they restricted India to a very modest 130-4 in 20 overs.

Coming into bat, Sri Lanka knew if they kept their cool they would easily chase the target. But India were not ready to give up just yet.

Mohit Sharma who was picked instead of Mohammad Shami got an early break through for India. Kusal Perera was out on five as his miss timed shot went straight to Ravindra Jadeja at mid off.

First Kohli caught Tilakaratne Dilshan (18) on the boundary off R. Ashwin. Then Ashwin took a wonderful forward diving catch to get the key wicket of Jayawardene on eighteen. 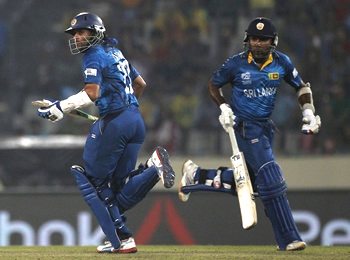 Finally MS Dhoni took a low catch behind the stumps to dismiss Lahiru Thirimanne for just seven. With 53 still needed off 45 balls, Sri Lanka were a little nervous on 78-4.

Sri Lanka’s gamble to send Thisara Perera ahead of Angelo Matthews paid off as he smashed fourteen runs off an Amit Mishra over. Meanwhile at the other end Kumar Sangakkara made sure his last World T20 was going to be a memorable one, smacking 52 of 35 balls.

In the end the only Sri Lankan to be brought in the IPL auction made the difference. Perera’s 21 off 14 balls took Sri Lanka to a famous six wicket win with fifteen balls to spare.

After the forty overs, Sri Lanka emerged as the new World T20 champions for the first time. Dedicating this victory to the nation and the two veteran cricketers, Angelo Matthews said: “Sri Lanka this is for you. I am glad the whole team did it for Sanga and Mahela.”

Virat Kohli who was named man of the tournament for his 319 runs, praised the Sri Lankan team as he said:

“Congratulations to the SL team, especially Mahela and Sanga. Darren was right, the god was really smiling on them. But they deserved this, they played really well.”

At the end of the day a couple of tight overs during the Indian innings made the difference. Yuvraj Singh could not hit the ball off the square, which cost the match for India as he consumed too many balls.

It has to be said that this World Twenty20 competition has been one of the best.

Some of the highlights of this tournament were Imran Tahir’s (South Africa) leg spin bowling, Virat Kohli’s batting, Netherlands shock win against England and of course Sri Lanka finally lifting the trophy.

Faisal has creative experience in the fusion of media and communication and research which increase awareness of global issues in post-conflict, emerging and democratic societies. His life motto is: "persevere, for success is near..."
T20 Cricket Final 2014 ~ India vs Sri Lanka
Premier League Football 2013/2014 Week 31