"Just tried to bowl good line and length and it worked for me and the team."

Sri Lanka defeated Pakistan by five wickets to win the 2014 Asia Cup final at the Shere Bangla Stadium in Dhaka, Bangladesh on 08 March 2014.

Fast bowler Lasith Malinga who bowled a devastating opening spell was declared man of the match for his five wicket haul. 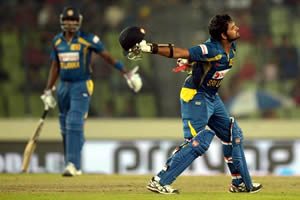 The men from The Emerald Island deserved the victory after playing some wonderful and efficient cricket throughout the tournament. Defending champions Pakistan were exciting, but were simply not good enough on the day.

After ten games of the Round-robin format, it was the two best sides in the final. The final was a repeat of the opening match, which Sri Lanka won by twelve runs.

Pakistan won the toss and chose to bat first on a flat well rolled wicket, similar to the one against India when batting second. This was quite a strange decision, especially as former Pakistan captain Wasim Akram in his pre match analysis said: “Pakistan now have the confidence to chase a 300 target.”

Both teams made changes to their line up. Sharjeel Khan and Junaid Khan replaced Sohaib Maqsood and Abdur Rehman in the Pakistan team. While in the Sri Lanka team, Suranga Lakmal came in place for Ajantha Mendis. 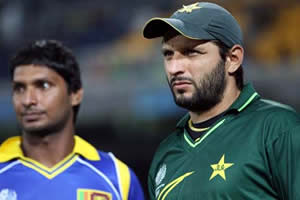 Pakistan’s worst nightmare started in the very first over. After hitting two boundaries, Sharjeel (8) was caught at mid on by Thisara Perera off Malinga to leave Pakistan on 8-1.

The Men in Green were in further trouble when Malinga exposed their lack of footwork. Ahmed Shehzad (5) and Mohammed Hafeez (3) were both caught behind, with Pakistan struggling on 18-3. Pakistan players were clearly making the same mistakes, literally giving their wickets away to Sri Lanka’s prime bowler.

It was then upto captain Misbah-ul-Haq and Fawad Alam to consolidate the innings, be it at a slow rate. But once again Misbah could not convert his Tuk Tuk (very slow) start, as he was caught at long on by Kusal Perera for sixty-five.

Umar Akmal then joined Alam at the crease and quickly accelerated the innings, with some fine shots and quick singles. The valiant Alam notched up his maiden one day international hundred with a six over mid wicket. 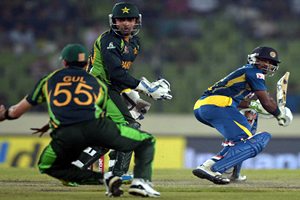 Akmal completed his third fifty of the tournament off just thirty-five balls before he became Malinga’s fifth victim of the match. Alam hit a four off the penultimate ball to ensure Pakistan reached a fighting score of 260-5 in their allotted fifty overs.

Sri Lanka who were set a target of 261 at 5.22 runs per over got off to a flyer with some explosive batting from young talented batsman Kusal Perera. Perera was particularly lethal against Umar Gul who had been out of sorts with the new ball.

With Perera smacking the Pakistan bowlers to all parts of the ground, Misbah introduced his trump card, Saeed Ajmal. The magician picked up two wickets in two balls, including that of Perera (42) and Kumar Sangakkara (0) to shake Sri Lanka briefly.

But the four times Asia Cup winners quickly put the setback behind them as Thirimanne and Mahela Jayawardene built a 150 run partnership off just 155 balls. 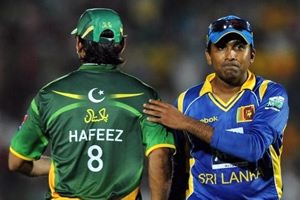 Pakistan did not help their cause with some poor fielding, especially behind the stumps and in the deep.

With the target on the horizon, Thirimanne brought up another superb hundred. This was his second century of the competition against Pakistan. Luck was with Thirimanne on the night as he was dropped by Akmal off Afridi on 36. This turned out to be a crucial turning point in the match.

And so Sri Lanka were crowned the Asia Cup champions for a record equalling 5th time. This was Sri Lanka’s 1st Asia Cup title since 2008.

Talking of his innings at the presentation ceremony, Thirimanne said:

“We knew 260 was gettable but one man has to take up the responsibility and play through the innings. Ball was skidding onto the bat and I used the pace. It’s my first Man of the Series and I’m very happy about it.”

Malinga, the leading wicket taker of the tournament said:

“Last couple of days we were training hard and we stuck to our basics in the big final. And the rest helped as well. Just tried to bowl good line and length and it worked for me and the team.”

For Pakistan it’s not all doom and gloom, as they will now focus their attention to the upcoming 2014 ICC T20 World Cup starting on 16 March, 2014.

Faisal has creative experience in the fusion of media and communication and research which increase awareness of global issues in post-conflict, emerging and democratic societies. His life motto is: "persevere, for success is near..."
Indian Footballer Bidyananda Singh impresses Barcelona
Premier League Football 2013/2014 Week 26