Bidyananda Singh, a young talented footballer from India has impressed Barcelona scouts at a training camp held at the Aspire Academy in Doha, Qatar. It would be like a dream come true if the Spanish giants made a move for him.

"I am happy that four of us could go and attend this very important camp."

One of Asia’s most promising player, Bidyananda Singh could set the football world alight if Barcelona follow up their interest in signing him.

The Spanish giants recently held a training camp at the Aspire Academy in Doha, Qatar in pursuit to find young footballing talents from India, Australia and the Netherlands.

Italy’s Inter Milan and Manchester United from the English Premier League were also present in the city, scouting for young players who could eventually sign up to their respective academies. 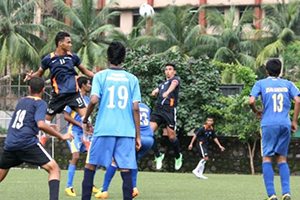 Even before his talents were fully expressed at the camp, it was Singh’s uncanny likeness with Japanese footballer Keisuke Honda that caught the eye.

His facial features and blonde locks fully justified the ‘Honda’ moniker, coined by the ‘Barca’ coaches. Bidyananda’s name wasn’t the easiest to pronounce for Europeans either, which Singh happily acknowledges.

Young Singh became one of only two Indian players to play in the Aspire Academy’s All Star Team. He marked a dream debut by scoring the opening goal of a 3-1 win over the mighty Dutch side, AFC Ajax.

The fact that the Indian Honda took up a place in the All Star Team in favour of a Japanese player was an incredibly ironic coincidence. The trial ended very well for Bidyananda Singh as he was awarded the player of the camp by Barcelona coaches.

Highlighting the benefits of the camp Singh said: “I am happy that four of us could go and attend this very important camp. I am very happy that both me and Gursimrat were among the playing XI in one of the teams.”

Singh comes from a village called Moirang in India where he learnt to play on the streets, littered with rough stones and other debris. This was a blessing in disguise for the player, as he ended up bravely leaving home at the age of eleven to move to Manipur and train with the SAI – the Sports Authority of India. 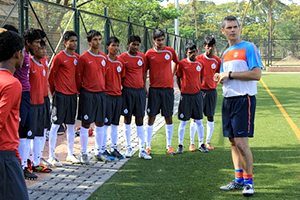 The lack of football coaching in his hometown was partly the reason he had to move. The other reason was more personal. The young lad realised that not only did the shift to Manipur fuel his ambition to pursue a career in the beautiful game, but it also helped his domestic life.

With his father having retired from the Assam Rifles division of the Indian army and his mother running a grocery store, Singh took on the responsibility to be self sufficient and work hard to achieve his goal. It was like one less burden on his parents. Talking of this he said:

Only a year after leaving home, Singh’s talents were recognised enough to deserve a call up from the All India Football Federation (AIFF) Academy and join their Under-13s squad. The defensive midfielder never failed to perform and put in some good performances.

The only drawback to his growing success was that trips home to visit family and friends had become few and far between. On one such occasion however, after taking part in an Under-14s tournament in Goa in 2010, Singh recollects: “Nobody was home when I got there.”

Singh is at the moment training hard at the AIFF Academy in Vashi, Navi Mumbai. The Academy is relatively new, having launched in May 2012. 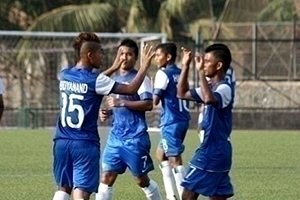 The Academy provides young footballers with a set amount of ’coaching hours,’ whilst still focusing on other important activities like studies, recreation and recuperation.

Individual players must also follow strict personalised diet charts tailored to their needs. Meals are provided in accordance to their dietary requirements.

Now that Singh has put Manipur on the map and himself on Barcelona’s radar, what now for the talented youngster? Barcelona have a long and successful history of creating and nurturing the cream of young talent.

La Masia de Can Planes, better known as ‘La Masia’ which means ‘The Farmhouse’ is where the young Barca talent is honed and perfected. With over 300 players, it’s been one of the world’s best football academies since its launch in 2002.

Recent examples of players graduating from La Masia would be the likes of Lionel Messi, Andrés Iniesta and Xavi Hernández. Singh would be perfectly placed at La Masia to become the next Lionel Messi.

The re-growth of football in India has been phenomenal. It’s a little known fact that cricket-obsessed India at one point had football as its national sport. Introduced in the 1800’s by British soldiers, it had been growing at a steady pace before cricket took over.

Now with the growing love of football in India, we could be amongst a generation of children who may well one day lift a major trophy representing India, Pakistan or Bangladesh.

The chance to play and train at Barcelona would be a huge opportunity for Bidyananda Singh, one which will truly put the subcontinent back on the football map.

Rupen has been passionate about writing since childhood. Tanzanian born, Rupen grew up in London and also lived and studied in exotic India and vibrant Liverpool. His motto is: “Think positive and the rest will follow.”
Premier League Football 2013/2014 Week 25
Sri Lanka win 2014 Cricket Asia Cup