India have completed a 5-0 ODI series win against Sri Lanka. The Men in Blue beat Sri Lanka by three wickets in the fifth and final One Day International (ODI) played in Ranchi. Virat Kohli’s unbeaten 139 guided the home team to victory.

"Unfortunately we did not play good cricket once again and India did play very well."

Team India completed a 5-0 series whitewash after defeating Sri Lanka by three wickets in the fifth and final One Day International (ODI) played at the JSCA Cricket Stadium in Ranchi on 16 November 2014.

India had already taken an assailable 3-0 lead after winning the first three ODIs quite comfortably.

India continued to dominate as they won the penultimate match of the series by 153 runs. The fourth ODI was a historic day in world cricket, with Rohit Sharma becoming the first player to score two double centuries in this format. 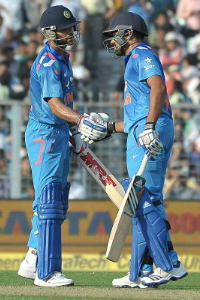 He scored his first double hundred against Australia in November 2013. A year later he made his second double ton against Sri Lanka.

Sharma also made a new world record for the highest One Day International score by a batsman. He hit 264 off 173 balls. His wonderful innings consisted thirty-three 4’s and nine 6’s.

India went into the final ODI determined to complete a clean sweep. On the other hand, Sri Lanka were hoping to avoid the dreaded whitewash.

Opting to bat first, Sri Lanka got off to a flying start before Dhawal Kulkarni bounced back to dismiss opener and debutant, Niroshan Dickwella (4).

Stuart Binny then bowled out the dangerous Tillakaratne Dilshan for thirty-five to give the home side an early initiative.

Sri Lanka did recover for a little while, before Indian spinners Akshar Patel and Ravichandran Ashwin dismissed Dinesh Chandimal (5) and Mahela Jayawardene (32) to leave the visitors struggling at 85-4.

Skipper, Angelo Matthews then put up a solid 128 run partnership with Lahiru Thirimanne to give The Lions some stability in the middle overs.

After notching up his fifty, Thirimanne was eventually caught at long on (Rayudu) off Ashwin for fifty-two. 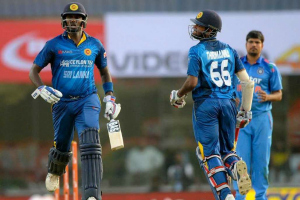 From there on Matthews took most of the strike as Thisara Perera (6), Seekkuge Prasanna (0) and Ajantha Mendis (0) all fell in quick succession.

Having rescued the situation, Matthews played a captains knock as he brought up his maiden ODI century. His unbeaten 139 took Sri Lanka to a respectable score of 286 for 8 in their allotted fifty overs.

Patel bowled beautifully for India, taking 2-45 in his ten over spell.

India’s chase did not begin well as Ajinkya Rahane (2) and Rohit Sharma (9) were both bowled out by Matthews early on.

But it was the Indian skippers turn to lead from the front. Virat Kohli and Ambati Rayudu came together to put on a match winning 136 run stand.

With India inching closer to victory, Rayudu run himself out for fifty-nine. The Islanders then gave the home team a further scare by taking some quick wickets. Robin Uthappa (12) and debutant Kedar Jadhav (20) fell cheaply as India went from 150-2 to 180-4. 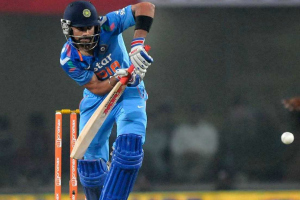 Virat however motored on, bringing up his 21st ODI century. But to make his task more difficult, Kohli was losing partners at the other end.

Mendis struck twice off consecutive deliveries to leave India on 233-7. Binny was stumped by Chandimal off Mendis after scoring twelve runs. And on the very next ball, Ashwin was given out lbw for a golden duck.

Still requiring fifty-six runs to win, young Patel gave Virat the support he needed. His unbeaten knock of 17 off 14 balls proved to be very crucial in the end.

Kohli and Patel put on a fifty-seven run stand as they guided India to a three wicket win, and with it a 5-0 ODI series win.

After scoring a brilliant 139* under pressure, Virat Kohli summarised the match and series saying:

“The ball wasn’t quite coming on. It wasn’t easy once the ball got old. I was running out of partners and that is something others need to learn from this on how to maintain composure. If you want to make others to do something else, it has to start from me. I played the helicopter and it came off well, playing in MS’ hometown, it worked well.”

“You saw the character and composure of some young guys in the series. Rohit’s knock was legendary and it won’t be bettered soon.” 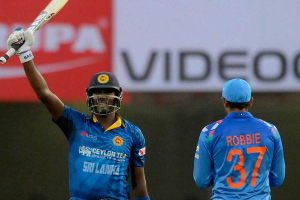 Rewarded for his all round efforts, Angelo Matthews was given the Man of the Match award. At the post match ceremony, while expressing his disappointment, an optimistic Matthews said:

“Unfortunately we did not play good cricket once again and India did play very well. It was a tough wicket. We batted pretty well and 287 was a huge score on this pitch. But Kohli batted very well and best of luck to them in Australia. We got to flush this out of the system as soon as possible and need to gear up for the England series.”

Virat Kohli received the Player of the Series award after scoring 329 runs in five innings.

India will take a lot of confidence from this series win, especially as they were missing some of their star players due to injury.

Sri Lanka will have to go back to the drawing board and assess what went wrong. With the 2015 World Cup on the horizon, Sri Lanka will want to improve their game very quickly.

Faisal has creative experience in the fusion of media and communication and research which increase awareness of global issues in post-conflict, emerging and democratic societies. His life motto is: "persevere, for success is near..."
India vs Pakistan 2015 World Cup Tickets Sold Out
Srikanth and Saina win China Open 2014