"Feels really great when you get a 100 and the team wins."

The Men in Blue thrashed England by nine wickets in the 4th ODI at Edgbaston, Birmingham on 02 September 2014.

Following the test series debacle, Indian proved that they were a completely different team in coloured clothing.

England set India a target of 207 in fifty overs. In reply, Indian scored 212 in 30.3 overs, courtesy of a 183 runs partnership between Ajinkya Rahane and Shikhar Dhawan. 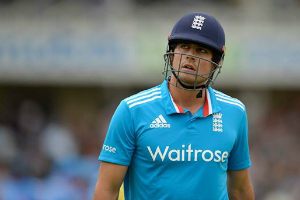 The first game of the five match series was washed out in Bristol, without a ball being bowled. India won the second game at Cardiff by 133 runs on the Duckworth Lewis method. India also won the third ODI, defeating England by six wickets at Nottingham.

In the fourth ODI, India won the crucial toss and elected to field first, a decision, which was effectively going to dictate the game. India handed an ODI cap to debutant Dhawal Kulkarni.

India quickly got into the action, as they dominated early on. England’s talented opener, Alex Hales was sent back to the pavilion for just six runs after a cracking in swinging delivery from Bhuvneshwar Kumar hit his off stump.

Three deliveries later, Kumar dismissed skipper, Alastair Cook on nine as Suresh Raina took a good low catch at fine gully. By the end of the fifth over, England were struggling on 16-2.

Replacing the injured Ian Bell, Gary Balance could not provide any balance to the innings. Ballance was caught at cover by Rahane off Mohammed Shami for seven runs. England were now reduced to 23-3 with seven wickets remaining.

Eoin Morgan who joined Joe Root at the crease then staged a little recovery for the home side. Though they were unable to accelerate, the duo did put on a fourth wicket partnership of eighty runs. 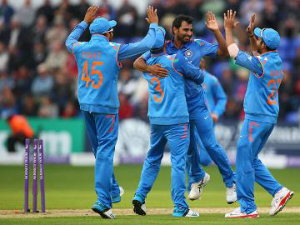 England found it hard to find any kind of momentum as they lost yet another set batsman. Root (44) was out reverse sweeping, caught at short third man by Kulkarni off Raina.

The in-form Moeen Ali tried to up the tempo with some big shots, but India maintained a firm grip on the game.

In his second spell, Shami struck once again as Butler was controversially given out lbw for eleven runs to leave England on 164-6. Hawk-Eye technology clearly revealed that the ball was going over the stumps by a fair margin.

At the other end Ali continued to motor on, becoming England’s first batsman to score a fifty in the series. His half-century came off thirty-seven deliveries.

But Ali’s effort was not going to be enough for England. Chris Woakes was run out on ten, before Ravichandran Ashwin clean bowled Moeen for 67 runs off 50 balls.

The hosts lost their last two wickets in quick succession as England crashed miserably in the end. Shami finished with 3-28 as England managed to put up just 206 in 49.3 overs. 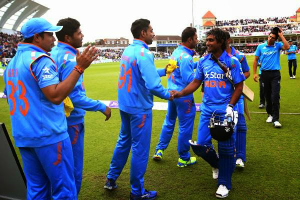 India began the chase very slowly as they scored only four runs in the first four overs. But in the fifth over Rahane opened up his arms hitting four boundaries off James Anderson.

At the other end, Dhawan was desperate to strike form. After timing a sweet boundary in the sixth over it looked like this might just be Dhawan’s day.

The Indian openers scored at almost six runs per over, as the first fifteen overs produced eighty-four runs from the visitors.

Rahane brought up his fifty in style, with a huge six off Ali in the 18th over. Three overs later, Dhawan completed his half-century in exactly the same fashion, this time hitting a huge six off Anderson.

At 127-0 after twenty-one overs, India were targeting a ten wicket win. Out of the two, Rahane was attacking the most.

It was icing on the cake for Rahane, when he accomplished his maiden ODI century in the 28th over.

India continued to march towards a big win, but a rush of blood saw Rahane lose his wicket as he was caught at cover by Cook off Harry Gurney. Rahane’s innings off 106 off 100 balls, included ten 4s and four 6s. 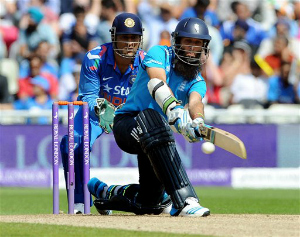 India’s first wicket partnership was worth 183, the fourth highest opening stand outside the subcontinent. Dhawan and Virat Kohli ensured that India crossed the finishing line in the 31st over.

With this triumph, Mahendra Singh Dhoni became India’s most successful ODI captain with over ninety wins. Summing up his teams performance, the Indian captain said:

At the post match ceremony, man of the match, Ajinkya Rahane said:

“Feels really great when you get a 100 and the team wins. Credit goes to the bowlers as well for setting up the match. Really happy for Dhawan, the way he batted was special”

Disappointed with the loss, Alastair Cook said: “A very tough day. It is frustrating not to play to your potential.”

With only a few months to go till the World Cup, England will have to assess their ODI squad very carefully, especially the selection of captain Alastair Cook.