Kolkata has never been a lucky ground for India, especially when playing Pakistan, losing their last three matches here. And this time too they were humbled in a most crucial tie, as Pakistan wins them defending a modest total.

Pakistan who had been written off by some analysts at the end of their fifty overs, managed to crush the Indian challenge with a fair amount of conviction. To beat them by eighty-five runs after scoring 250 represented their vast superiority at the end.

It was a critical encounter for both sides. Pre-series favourites, India were expected to fight back and win this game, in order to keep the series alive. Pakistan on the other hand still needed to improve their batting and bowling, despite comfortably winning the first match in Chennai by 6 wickets.

On 3rd January 2013, Pakistan ended India’s hopes of taking the series to a decider at the Feroz Shah Kotla Stadium in Delhi. By putting Pakistan into bat, India dug two holes for themselves. Former Pakistan captain Imran Khan speaking to NDTV said:

“When you choose to bat second in an ODI, you have two pressures. One is that of a quality bowling attack and the second is the pressure of the scoreboard.” 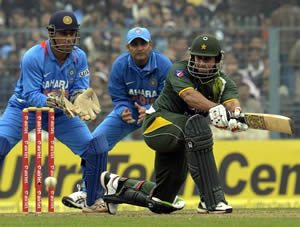 Pakistan may not have been satisfied at finishing with 250 all out off 48.5 overs, after an excellent start provided by openers Nasir Jamshed and Mohammad Hafeez. It was Hafeez who let India back in the game, missing the line of the ball, as he was bowled out by Ravindra Jadeja making seventy-six runs off 74 balls.

Not playing the full quota of fifty overs was a clear sign that Pakistan’s batting was still struggling, led by the three ‘Tuk Tuk’ players Azhar Ali, Younis Khan and captain Misbah-ul-Haq. At one stage, when the openers were firing on all cylinders, Pakistan looked like posting a huge total, something in the excess of 300.

Fine bowling by Ishant Sharma and Jadeja, with the latter not being a front line bowler, denied Pakistan the luxury of a commanding total. They were chiefly responsible in keeping Pakistan bogged down to 250. The last six Pakistan batsmen fell after the 41st over.

The decision of Indian umpire Vineet Kulkarni to declare Younis lbw came under fire because replays confirmed that the batsman had an inside edge before the ball had hit his pad. It was a poor decision from an up and coming umpire who had a brilliant game in the 2nd T20 International in Ahmedabad.

Even though Younis was struggling with a low strike rate, Pakistan was still cruising until this umpiring blunder. This led to the wickets of out of form batsmen Misbah and Kamran Akmal.

Thankfully for Pakistan, Jamshed batted through to the 42nd over. He was timing the ball beautifully and the 80,000 spectators at Eden Gardens thoroughly enjoyed his innings.

Jamshed hit a four to bring another century, his third consecutive hundred against India. He powerfully thumped the ball uppishly between the bowler and mid off, celebrating this feat with a fist pump.

India required 251 runs in their full fifty overs to win the match. Junaid Khan who removed Gautam Gambhir and Virat Kohli had the Indians on the back foot. Kohli was out to a great acrobatic catch by Akmal behind the stumps. Yet with a strong and deep batting line-up, India was still confident about reaching the target. 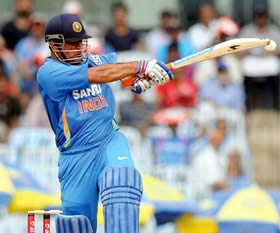 Even when a sluggish Virender Sehwag paced his innings nicely, it looked as if the match could go right to the wire, with India having big hitters like Yuvraj Singh and MS Dhoni. But Sehwag’s innings was short lived as he was out plumb lbw to Gul’s beautiful in swinging delivery.

Being so used to winning from such a situation, Yuvraj and Suresh Raina batted in an unhurried manner. Then Gul took the prize scalp of Yuvraj who hit the ball at the toe end of his bat, straight behind to wicket keeper Akmal who caught the catch at a comfortable height. Yuvraj flashed his bat in frustration, knowing India’s chances of winning the match were over.

Raina was next to go, brilliantly stumped by Akmal. The fatal middle order collapse sank the Indian team.

The dismissal of four other batsmen within a span of thirty-six runs was like the final nail in the coffin for team India. Even the experienced Malik came to the party with the wicket of Ravichandra Ashwin who was also stumped by Akmal.

Saeed Ajmal bowled splendidly, capturing the wickets of Jadeja, Bhuvneshwar Kumar and Ashok Dinda. The mystery off spinner not only tied down the stroke makers, but also claimed three for 20 in his ten overs.

Dhoni toiled away for another fifty, but it proved futile, as he never attempted to play any big shots early on in his innings.

Dhoni’s heroics in Chennai finished in a loss for India as well. The Indian captain was in the form of his life; he should have led from the front and batted higher up. His reluctance to bat at the top of the order and India’s fragile batting has cost them the series. Pinpointing the blame on the batsmen, former Indian opener Sunil Gavaskar said: 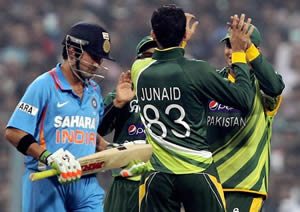 “They [batsmen] are the one’s who are known much more than the bowlers because of the performances they’ve had over the years. I think they are the one’s you’ve got to hold responsible.”

Junaid’s three wickets were instrumental in deciding the Indian fate, taking the final wicket of Ishant Sharma, as Pakistan completed the win in the 48th over.

With Junaid taking seven wickets in two matches, captain Misbah said: “I think the bowlers are really doing a great job, especially Junaid who is moving it both ways and asking questions of the batsmen.”

A jubilant Jamshed who won the man of the match award said: “I just kept a cool mind, and Hafeez played a great innings. Pitch was little bit slow, and I just played according to the ball. It was dream to play in the ground.”

The final game to be played at Delhi on 6th January 2013 is now a dead rubber, with the series already going to Pakistan. It’s a good chance for both teams to test their bench strength, trying some new players who have performed at the domestic level.

Faisal has creative experience in the fusion of media and communication and research which increase awareness of global issues in post-conflict, emerging and democratic societies. His life motto is: "persevere, for success is near..."
India beat Pakistan to draw T20 series
Hero Hockey India League 2013