“Irfan's yorker reminded me of Akram"

India triumphed against Pakistan with a good all round performance to tie the two match T20 series. An almost certain tense finish failed to eventuate in the final over, as Pakistan disintegrated from 146-3 to 181-7 in their twenty overs. Pakistan requiring twenty-six runs to win off 12 balls, succumbed to pressure as India celebrated a much-needed victory.

After a Christmas Day thriller in Bangalore, with Pakistan winning by five wickets, India was trying to salvage some pride and level the series. They had lost their last two Twenty20 matches of the winter season, first to England and then Pakistan.

It was another houseful at the Sardar Patel Stadium in Ahmedabad [Gujarat] on 28th December 2012. The ground situated in the Motera locality had an electrifying atmosphere. Honourable Chief Minister of Gujarat, Narendra Modi and the chief of IPL Rajeev Shukla were some of the high dignitaries watching the match in the ground.

Paresh Rawal a very familiar face from Bollywood was also at the ground. He was born in the city of Ahmedabad and is of Gujarati background.

In this second encounter between these passionate adversaries, India came back strongly to post a huge score of 192-5, to win the match by eleven runs. Pakistan’s bowlers had a bad day at the office; being hit all over the ground by none other than Yuvraj Singh and captain Mahendra Singh Dhoni. 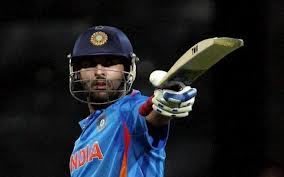 Ahmedabad has always been a happy ground for Yuvraj. After receiving his award for man of the match, he told Wisden India: “Yes, we have fond memories of beating Australia in this ground,” said Yuvraj.

“Most of the time, I’ve also got runs here. The crowd was amazing and the buzz was amazing. I really enjoyed it and will remember this game for a long time,” he added.

Pakistan won the toss and named an unchanged team, sticking to the same winning formula. However the decision to play Sohail Tanvir did not go well amongst the fans and Pakistan media.

India dropped Ravindra Jadeja for his mediocre performance in the low scoring defeat to Pakistan in the first T20 match. Jadeja’s replacement, Ravichandran Ashwin, proved very handy against Pakistan with his useful containing bowling. Pakistan openers made a solid opening partnership of seventy-four, before Ashwin got the key wicket of Nasir Jamshed [41 off 32 balls].

Once again, it was India’s most reliable and match winning player, 31-year-old Yuvraj Singh, who provided the Indian innings with a huge score. Not only did he top score with seventy-two runs [off 36 balls, four 4’s and seven 6’s] but also his fine night continued with the wicket of Pakistan’s young talented opener, Ahmed Shezad [31 off 29 balls]. Shezad had a rush of blood to the head and was eventually stumped by Dhoni off Yuvraj’s bowling. 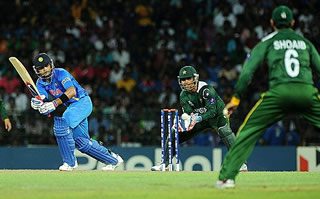 With Tanvir miserably struggling to control the white ball, it was left to Mohammad Irfan to exert some pressure on the Indian Batsmen. And he did exactly what he was told. After bowling a tremendous delivery, which went past Yuvraj, he followed it with a deadly yorker.

Irfan’s yorker dealt the experienced batsman a blow on his left foot that sent him hobbling on the field. While complimenting the young bowler, Yuvraj at the presentation ceremony said: “Irfan’s yorker reminded me of Akram.”

Irfan is one of the finds of the series and has now been retained for the three match ODI Series.

Yuvraj who hit the ball beautifully for seventy-two, and MS Dhoni, with a precocious thirty-three were both out trying to force Umar Gul. Gul had earlier taken the wickets of openers Gautam Gambhir [21 off 11 balls] and Ajinkya Rahane [28 off 26 balls], after making a good start for India once again.

Virat Kohli had more luck with Gul and leg spinner Shahid Afridi, easing them to the fence for some delightful boundaries. He was run out on [27 off 22 balls] by a direct hit from Ajmal. 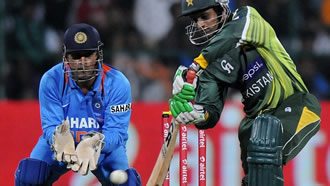 Pakistan’s most impressive batsman was captain Mohammed Hafeez, scoring the second fastest half-century [off 23 balls] by a player in a green shirt. For Pakistan Hafeez and Umar Akmal produced a fine collection of shots around the ground.

Umar Akmal was then out as a result of his own selfish tactics, which turned the tide in India’s favour. He refused to take a perfectly easy single, much to the frustration of captain Hafeez, and then the next ball he was bowled out by Ashok Dinda. Once he was gone the rest collapsed in a heap around Hafeez. By now Dinda, prevented Hafeez from scoring, as freely as he would have liked, chasing a run rate, which was hovering in around 11-12 runs per over.

Sensing a victory in front of a 54,000 packed home crowd, the Indian players jubilantly responded to each wicket as though it were a miracle, particularly the demise of the ‘Big Three’ – Afridi [11 off 5 balls], Hafeez [55 off 26 balls] and Kamran Akmal [5 off 3 balls]. Dinda took two crucial wickets at the end, claiming 3-36, including the prize wicket of Hafeez. 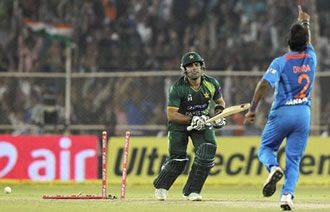 Gul was out in the final over, as India won the game by eleven runs. Shoaib Malik remained unbeaten on three.

Throughout the match there was not a hint of trouble, both teams played in the true spirit of the game. Even the umpires Vineet Kulkarni [Pune] and Sudhir Asnani [Bhopal] had a wonderful game; making some good close decisions along the way.

A much relieved MS Dhoni praised his batsmen, but he was particularly pleased with how his young bowlers handled the pressure at the end.

“A lot depends on the youngsters bowling the last overs, I think they held their nerve nicely. They were feeling the pressure but they responded really well and executed the yorkers. When they wanted to bowl slower ones they did that,” said Dhoni.

His opposite number and ‘Player of the Series,’ Mohammed Hafeez cited the 97-run partnership between Yuvraj and Dhoni as the “turning point of the match.”

It’s a shame that this T20 series consisted of only two matches. With India winning the second match, the series rightly deserved a decider. For India and Pakistan fans this is the biggest series in cricket. Thus the BCCI and PCB should agree to a schedule, which comprises of at least three matches in any format.

India certainly takes a psychological advantage into the ODI series against Pakistan, which starts on 30th December 2012. Looking ahead to the series, Pakistan might struggle with the inclusion of players like Younis Khan. Along with Younis, captain Misbah-ul-Haq and Azhar Ali are renowned for their Tuk Tuk [slow] style of play, which does not really help Pakistan’s cause.

As for India their success depends on how well they continue to bowl. Pakistan will be hoping that their bowlers can outshine the Indian batsmen.

Faisal has creative experience in the fusion of media and communication and research which increase awareness of global issues in post-conflict, emerging and democratic societies. His life motto is: "persevere, for success is near..."
Pakistan in Historic T20 win against India
Pakistan wins ODI Series against India