India has been drawn in Group D for Asia’s second qualifying round for the FIFA World Cup 2018. We take a look at India’s chances at making it to Russia.

“I am aware of the difficulties of playing against Turkmenistan and Guam who have made good progress.”

After defeating Nepal in the first round of qualifiers for the 2018 FIFA World Cup Russia, India will join Group D in the next qualifying stage in Asia.

The results of the draw was revealed in Kuala Lumpur, Malaysia on April 14, 2015. India is up against Iran, Oman, Guam and Turkmenistan in Group D.

The competition will last nine months and end in March 2016, after 40 teams in eight groups play home and away matches in a round robin format.

The winners of each group along with the four best second placed teams will advance to Asia’s final World Cup 2018 qualifying round.

They will also take their places in the 2019 Asian Football Confederation (AFC) Asian Cup.

Let’s take a look at the full list of groups: 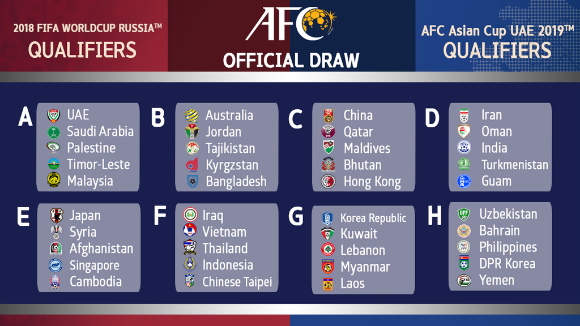 Most of the buzz surrounding this draw is focusing on Australia, Japan, Korea and Iran who all represented Asia at the 2014 World Cup in Brazil.

After winning the title at the AFC Asian Cup in January 2015, Australia is optimistic about taking one of the qualification spots by finishing in top position in Group B.

China is also named amongst those expected to qualify with what seems like a kind draw. With them in Group C are Qatar, Maldives, Bhutan and Hong Kong.

Jordan has been drawn in the same group as Australia, whom it beat in 2014 by two goals to one.

Whilst Jordan has never qualified for World Cup, the team has made history by reaching the last ten in qualification. This will provide some confidence, as they aim to repeat success against the Soceroos this time round and progress to the next stage.

Also on the list of favourites are United Arab Emirates who reached the 2015 AFC Asian Cup semi-finals.

UAE made one World Cup appearance in Italy in 1990, but lost all three games of the group stages. They will be hosting the 2019 edition of the AFC Asian Cup and hope to pair that with a good run into the World Cup qualification rounds.

Iran is the top ranking team in Asia at 40th position in the FIFA charts and is amongst the favourites to progress. 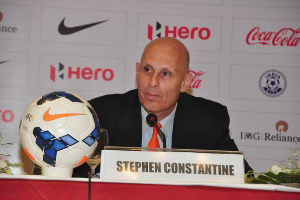 They stand in the way of India and a spot in the next round as do Oman, who is ranked at 97 – some way ahead of India who are down at 147.

Such competition will be hard to overcome. It is going to be a tough draw for the Indians who only played two matches in 2014.

Indian coach Stephen Constantine has spoken of the situation India has found themselves in.

He said: “It is a tough draw. One doesn’t need to explain the strengths of the two main rivals. And I am also aware of the difficulties of playing against Turkmenistan and Guam, who have made good progress.

“But it is always good to be in it and we will do all what is possible to get a result.”

India had never made it past the first round of qualification until this year, when they beat Nepal 2-0.

While India has a tough road ahead to qualify, the team will enjoy the challenge to compete with the best of best in Asia.

India will need to beat both Turkmenistan and Guam and get a good result against Oman, for any chance of squeezing into one of the qualifying positions.

Constantine himself has identified Guam as a difficult prospect, saying: “Guam have made tremendous progress in the last two years under a fellow English coach.”

India will open their campaign on June 11, 2015 at home to Oman. Though the venue is still undecided, it is believed that either New Delhi, Bangalore or Guwahati will host the tie.

India will need to take confidence from playing their first match in front of a home crowd, if they are to make a good start to the round. Their next match is an away visit to Guam.

The competition that follows will be difficult, lasting just under a year and finishing in March 2016.

However, by playing eight matches between now and then, India should be provided with a chance to climb even higher in the world ranking which, if nothing else, should provide a confidence boost for events that follow.

Take a look at the all-important dates for the Indian side:

It really does come down to luck of the draw and for some countries, it seems nice and easy.

But for India, it may just be too much to ask of a nation plagued by disappointing showings at this level of competition.

With the Indian Super League encouraging young homegrown talent, team India will place their hopes on improving at the International stage.