The first ever British Ethnic Diversity Sports Awards (BEDSAs) took place at the Ricoh Arena in Coventry on Saturday 20th February 2015. Find out the winners and watch the highlights of the star-studded event here.

"He’s made a wonderful positive contribution to the game but also he is a great role model.”

The inaugural British Ethnic Diversity Sports Awards (BEDSAs), in partnership with Sporting Equals, were held at the Ricoh Arena in Coventry, on Saturday 20th February 2015.

The first ever BEDSAs were hosted by Eastenders star Nitin Ganatra, who was returning to the city of his birth.

The 500-plus guests and nominees, including Helen Grant MP, the Minister for Sport, Tourism and Equalities, and former government minister Keith Vaz, were entertained by the by the melodic, enthusiastic, and infectious Patrick Alan and Music Box Live.

England cricket star Moeen Ali was awarded the Lycamobile Sportsman of the Year. He beat fellow nominees, sprinter Adam Gemili, and track cyclist Kian Emadi, both medalists at the 2014 Commonwealth Games in Glasgow.

As the 27-year-old Ali was on World Cup duty in Australia, his proud father, Munir, collected the award on his behalf.

Watch the Video Highlights of the BEDSAs here: 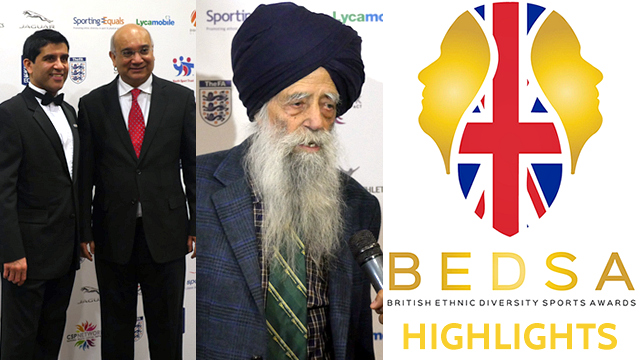 The FA Coach of the Year was awarded to Huddersfield Town’s Chris Powell. Powell’s award was collected on his behalf by former footballer Paul Elliott.

Elliott said: “He will be absolutely delighted and overwhelmed. He’s made a wonderful positive contribution to the game, but also he is a great role model.” 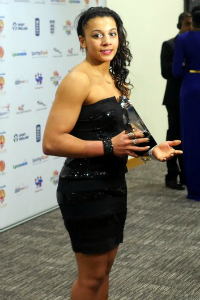 “It’s such an amazing feeling. I knew I was up against some quite strong contenders so I wasn’t really expecting this award at all.”

Paralympian Ali Jawad was awarded The UK Sport Inspirational Performance of the Year. The World Record-holding Powerlifter won a bronze medal at the 2014 Commonwealth Games.

Ali has a bilateral limb loss from birth and also has Crohn’s disease. However, he said that he does not agree with the way the word ‘disability’ is used to describe people. His achievements go some way to explaining why.

The Youth Sport Trust’s Young Sports Person of the Year went to 16-year-old table-tennis prodigy, Tin Tin Ho. She won a silver medal at the 2014 Commonwealth Games in the mixed-doubles. She is currently the cadet, junior, and under-21 national champion.

Denise Lewis OBE, former heptathlete and gold medallist at the 2000 Sydney Olympics was presented with the Jaguar Lifetime Achievement Award.

Currently the President of medical research charity, Sparks, Lewis said: “Recognition is wonderful when you can actually do something with it. My life’s work is trying to help others if I can in any guise.” 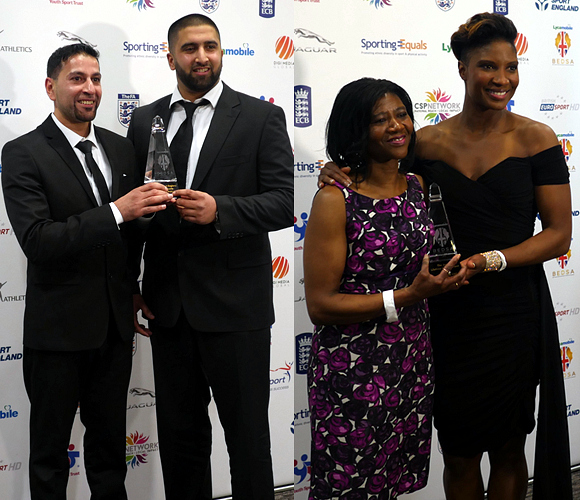 He told DESIblitz that when he began his journey as a marathon runner aged 89, he had no idea how successful he would become: “In the village, I had some trouble. And God showed me this path. I never thought that I would achieve all this.”

The BEDSAs also aimed to acknowledge the contribution of those unsung heroes who work at the grassroots level in our communities. 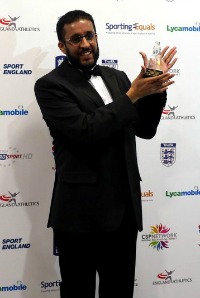 She promotes bike rides for women from a variety of backgrounds who would not otherwise have considered it as a hobby or mode of transport.

Amatullah said: “I feel like a star. A proper star. I am actually thrilled, delighted, really excited to have won.”

Dr Kamran Ahmed, a GP practitioner from Wolverhampton, won the ECB Behind the Scenes Award. He has been a dedicated volunteer providing medical support in the sport of boxing, notably at the 2012 Olympic Games and the 2014 Commonwealth Games, and for local fights in the West Midlands area. He said:

“It is not very often that anybody who volunteers really gets any recognition. It’s usually a case of being in the background and behind the scenes. So I’m surprised to be front-of-house for once.”

The Sport England Community Sports Project was awarded to the Sheffield-based boxing club One World Sports Gym. Co-founders Israr Asif and Waj Nazir began boxing classes at the local mosque for women who had previously not had the chance.

Nazir said: “We first did it in the mosques. But now we’ve got our own building. We’re primarily focussing on women and trying to get them into sport, because it is a hard to reach group.”

Here are the Winners of the 2015 British Ethnic Diversity Sports Awards (BEDSAs):

The FA Coach of the Year
Chris Powell

The ECB Behind the Scenes Award
Dr Kamran Ahmed

The Sporting Equals Sportswoman of the Year
Rebecca Downie

The Lycamobile Sportsman of the Year
Moeen Ali

The British Ethnic Diversity Sports Awards (BEDSAs) have brought different communities together and given them a platform to celebrate their success and achievement in the world of sports.

After a successful inaugural celebration, we hope to see the BEDSAs grow in even greater stature in the future.

Congratulations to all of the Winners!

Harvey is a Rock ‘N’ Roll Singh and sports geek who enjoys cooking and travelling. This crazy guy loves to do impressions of different accents. His motto is: “Life is precious, so embrace every moment!”
Young cricketer Ankit Keshri dies after collision
Tough Draw for India in 2018 FIFA World Cup