Sports personalities arrived for the British Ethnic Diversity Sports Awards on 18th March 2017 to celebrate the incredible achievements of the BAME community.

"It really means a lot to be named as your Sportsman of the Year!"

Now in its third year, the BEDSAs celebrate the resounding success of sports men and women from all ethnic backgrounds, as well offer emerging sporting talents a platform to put themselves forward.

The lavish evening welcomed sports personalities and their teams from all over the UK. They arrived in London, dressed up to the nines and all in good spirits.

Watch all the highlights from the 2017 Lycamobile British Ethnic Diversity Sports Awards here: 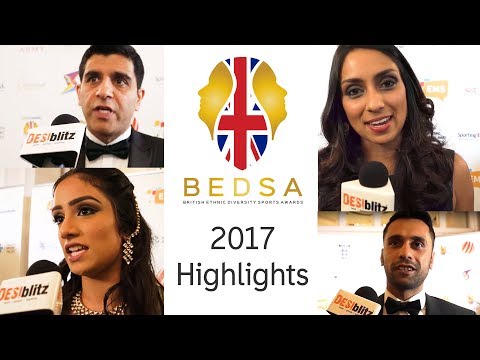 As well as sports talent from Asian communities, including former England cricketer Isa Guha and world champion martial arts silver medallist Harleen Kaur, who was “thrilled and honoured” to be nominated for ‘Young Sportsperson of the Year’.

Room hasn't stopped laughing at the @BEDSAofficial tonight thanks to this man Sir @LennyHenry – @SportingEquals#BEDSA2017 pic.twitter.com/I7nFSN9GzA

The top honours of the night were taken by Sir Mo Farah and Kadeena Cox. Winning the ‘Lycamobile Sportsman of the Year’, Mo said:

“Thank-you to the Lycamobile British Ethnic Diversity Sports Awards and a very special thanks to everyone who’s voted for me.

“It really means a lot to be named as your Sportsman of the Year! And congratulations to my fellow nominees as well. It’s so great to see everyone come together this evening to celebrate the incredible achievements of our diverse sporting communities.”

British parasport athlete, Kadeena Cox took the award for ‘Sportswoman of the Year’. Having proved to be an inspiration to many, she said:

“I’m very honoured to have won this award and would like to give a massive thanks to Sporting Equals for all the work they do in BAME communities.”

Here is the full list of winners of the 2017 Lycamobile British Ethnic Diversity Sports Awards:

CEO of Sporting Equals, Arun Kang later commented on the significance of the awards, saying:

“I would like to congratulate all the winners, they thoroughly deserved their accolades.

“Sporting Equals organise the BEDSAs as we want to celebrate diversity at both an elite and grassroots level.

“It was heartwarming to see the delighted faces of the community groups and volunteers who give so much of their time to get communities more active as well as the elite stars who will hopefully inspire the next generation to take the baton.”

“Awards such as these are crucial in driving change in the sports sector by increasing participation and diversity.”

The British Ethnic Diversity Sports Awards 2017 proved to be a resounding success in strengthening the impact of ethnic diversities in sports and encouraging more people from different communities to actively participate in the profession.

Juggy works in advertising but his real passion lies in writing and radio presenting. He enjoys swimming, binging on American TV shows and eating tasty cuisine. His motto is: “Don't think about it happening, make it happen.”