Saina Nehwal and Kidambi Srikanth struggled against their respective Japanese opponents on the opening day of the BWF World Superseries Finals in Dubai.

"I haven’t played for the last three weeks so my stamina is low."

The BWF World Superseries Final started on December 9, 2015 in Dubai.

However, it was a disappointing first day for India, as Saina Nehwal and Kidambi Srikanth both suffered straight game defeats.

The bronze medallist at the London 2012 Olympics was beaten 21-14, 21-6 by world number nine, Nozomi Okuhara of Japan.

Okuhara took an early 5-1 lead in the first game, but Nehwal was able to bring the tie back to an even 8-8.

But the comeback was short lived as a slew of unforced errors gave the game away.

The second game saw the Japanese take a quick 11-3 lead and went on to win all of the next fourteen points to secure victory.

It is worth noting that Nehwal has been battling an ankle injury, which certainly impeded her performance in the fixture.

She looked extremely depleted compared to her normal state and her mobility was tellingly restricted.

Nehwal said: “It’s a huge honour to play here, it’s a big event and the level of competition is very tough.

“I haven’t played for the last three weeks so my stamina is low. Nozomi picks up everything, I’m trying to push myself but it’s not happening.”

Meanwhile, world number eight Kidambi Srikanth, also faced a Japanese player in the form of Kento Momota. He was outplayed 21-13, 21-13.

Srikanth was in good form heading into the tournament, reaching the finals of the Indonesia Masters Grand Prix Gold last week, but it was not enough to overcome the Japanese challenge.

Momota quickly accumulated a 7-3 lead before the pair entered the break with Srikanth 11-8 down.

The Japanese player swiftly assailed to a 16-8 advantage and comfortably saw out the game. 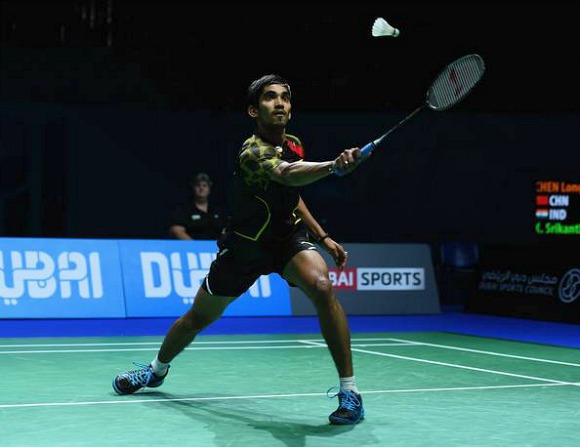 The second game was a similar story. Momota jumped to an early 6-3 lead and continued to frustrate his opponent, as the competitor entered the break with the score 11-5.

Srikanth had no answers to his opponents pinpoint angled returns and perfect smashes, allowing Momota to amount a 14-8 lead before surging to a dominant 20-12 score line.

Srikanth, however, has lost out to Viktor Axelsen of Denmark (13-21, 18-21), and will definitely have to change up his game plan to stay alive in the competition.