West Indies thrashed Pakistan by eighty-four runs to reach the semi-finals of the 2014 World T20. Allrounder Dwayne Bravo was declared man of the match for his dashing 46 off 26 balls.

"I'm trying to do whatever is necessary to get the team over the line."

West Indies have qualified for the 2014 World T20 semi-finals, after thumping Pakistan by eighty-four runs at the Shere Bangla National Stadium in Dhaka on 01 April, 2014.

This was West Indies biggest win against any team in World T20 cricket. With this victory, West Indies have joined India, South Africa and Sri Lanka in the semi-finals. 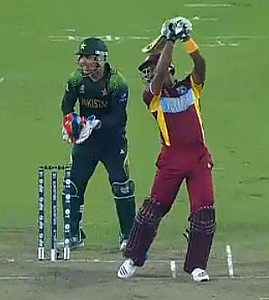 West Indies won the toss and elected to bat first against Pakistan. Both sides were unchanged for this winner takes all encounter.

West Indies started slowly before losing both openers inside the first four overs. Chris Gayle trying to play a tentative push to Mohammad Hafeez was stumped by wicket keeper Kamran Akmal for five.

Dwayne Smith (8) was next caught behind off Sohail Tanvir to leave the Windies on 22-2. Lendl Simmons and Marlon Samuels built the innings for a little while, before Shahid Afridi took two wickets in the 11th over. Umar Gul run out Simmons for thirty-one, before Afridi bowled out Samuels on twenty.

With Dinesh Ramdin out to a slog sweep off Zulfiqar Babar for only five, West Indies were in a spot of bother at 81-5.

But the stage was set for a late onslaught from Dwayne Bravo and Darren Sammy. After initially hitting a few boundaries, Bravo cut loose as he hit two consecutive sixes off Umar Gul. From their on the duo hit a number of sixes and fours. 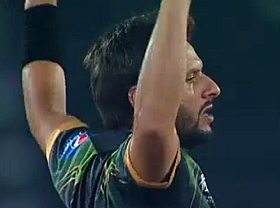 Even though Bravo was run out for forty-six, the damage was already done. He and Sammy put on a sixth wicket partnership of seventy-one.

To make matter worse for the Men in Green, Saeed Ajmal was smacked for twenty-four runs in a crucial 19th over. This rattled Ajmal and the Pakistan team going into the last over.

At one stage West Indies were looking at 140, but with Sammy unbeaten at the end West Indies reached a healthy total of 166-6 in their twenty overs.

Scoring eighty-two off the last five overs seemed to have turned the tide in West Indies favour. Sammy in particular was very hard on the Pakistan bowling attack, scoring his 42* at a strike rate of 210.00.

During the innings break, speaking highly about his captain, Dwayne Bravo said: “Darren Sammy once again played a fantastic knock. He’s one of the cleanest hitters in world cricket today and I am very happy to see the way his cricket has progressed. He’s been working very hard on his game.”

Pakistan came into bat nervously, knowing that they were not good chasers. Not being able to handle the pressure Pakistan lost both openers for a Golden Duck.

Ahmed Shehzad was out plumb lbw to a beautiful in-swinging yorker from Krishmar Santokie on the first ball of their innings. Kamran Akmal departed next as he was caught at mid off by Bravo off Badree. 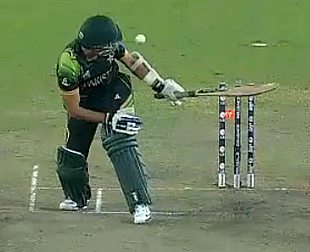 When Shoaib Malik was stumped out for two, it was all doom and gloom for the Green Shirts.

The three early wickets jolted the entire Pakistan team. Mohammad Hafeez (17) who had a very ordinary tournament, both with the bat and ball was next to go as he spliced the ball straight to Gayle off Andre Russell.

In an attempt to accelerate, the Pakistan middle order collapsed without any threat. Umar Akmal (1), Sohaib Maqsood (18) and Shahid Afridi (18) were all stumped off either Badree or Narine to leave Pakistan in no man’s land on 75-8.

West Indies wrapped up the final two wickets to win the game by a huge margin of eighty-four runs. Samuel Badree took 3-10 in his four overs. Dwayne Bravo was awarded the man of the match for his superb forty-six.

At the post-match presentation a disappointed Mohammad Hafeez said:

“This wasn’t the best of performance from Pakistan. We didn’t play well in the final four overs, credit to West Indies. We were a little bit panicked early in the chase.”

A triumphant Darren Sammy said: “Australia was a pumped-up West Indies, today was a more focused West Indies. They haven’t chased very well. We were looking for 160, we had the momentum going into the dressing room at the break.” 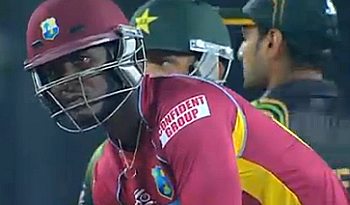 He continued: “I have worked a lot with the batting coach, it is just about being confident, I’m trying to do whatever is necessary to get the team over the line.”

West Indies who are peaking at the right time will take huge confidence from this win. Pakistan are out of the tournament and will soon be heading home.

Elsewhere, Sri Lanka entered the semi-finals after a fifty-nine runs win against New Zealand in the final Group 1 game in Chittagong. The Kiwis were all out for 60 in 15.3 overs, in reply to Sri Lanka’s 119 in 19.2 overs. Sri Lanka’s, Rangana Herath picked up five wickets for three runs.

Sri Lanka became the second Asian team to make it to the last four of the competition. They will face West Indies in the first semi-final on Thursday 03 April 2014. India will take on South Africa in the second semi-final on Friday 04 April, 2014.

Faisal has creative experience in the fusion of media and communication and research which increase awareness of global issues in post-conflict, emerging and democratic societies. His life motto is: "persevere, for success is near..."
Premier League Football 2013/2014 Week 30
Sri Lanka qualify for Cricket T20 final