India beat South Africa by six wickets to enter the 2014 World T20 cricket final. Virat Kohli who scored a wonderful 72* off 44 balls was adjudged man of the match. Ravichandran Aswhin bowled a phenomenal spell, picking up three wickets for twenty-two.

"Today was one of those days when I had to keep my cool."

India reached the final of the 2014 T20 Cricket World Cup after defeating South Africa by six wickets in Dhaka. India came into the semi-final match against South Africa as a clear favourite.

Prior to this match, South Africa had never lost a T20 match after scoring 170+. But today South Africa met an Indian side which was playing at it best.

India made it to their second World T20 final after winning five games in a row. India’s six wicket win against Bangladesh in the semi-final can be best described as the Virat Kohli and R. Ashwin show.

Having scored three fifties in the tournament, player of the match, Virat Kohli said: “Today was one of those days when I had to keep my cool.” 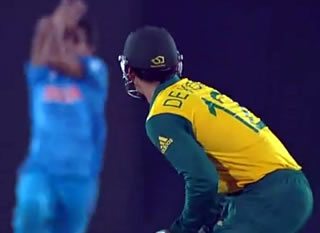 The Men in Blue successfully chased the big total with five balls to spare. This is the first time that India has made it through to the final of the World Twenty20 competition since 2007.

Despite losing the toss, much of the crowd in the ground was supporting Team India. The Men in Blue drew first blood as Bhuvneshwar Kumar dismissed Quinton de Kock for just six runs.

Hashim Amla went past twenty for this sixth time in a row in T20 Internationals. Before the game had started, Ashwin said he was in the best form of his life. And he showed it today, as Amla (22) became the first of his three victims on the night.

Ashwin delivered a carom ball to Amla, which hit leg, before turning sharply to hit off stump. It was simply a beautiful delivery, which squared Amla up. 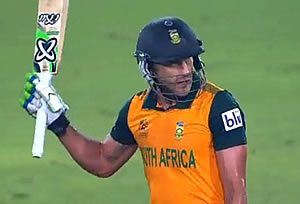 Faf du Plessis returned as captain of South Africa after serving a one match ban. He took the bull by the horns, reaching his 50 of just 36 balls. Joining Faf du Plessis was the in-form Jean-Paul Duminy as Amit Mishra proved to be ineffective for India.

South Africa smashing sixty runs between the 10th and 15th over were at one stage looking to score around 185-190. But that’s when the Proteas lost Faf du Plessis for 58 off 41 balls. The skipper was a little unlucky as a delivery from Ashwin hit his chest before going onto the stumps. 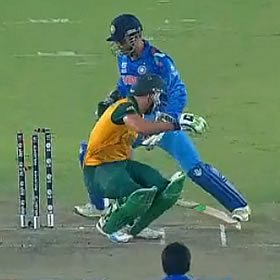 Duminy’s 45 off 40 balls kept them in the picture for a big total. The rainbow nation eventually finished with a competitive total of 172-4 in 20 overs, after David Miller scored 23 off 12 balls.

Rohit Sharma came into bat in an attacking frame of mind as he smacked the South African bowlers all around the stadium, including fast bowler Dale Steyn. After scoring 24 off 13 balls, Sharma’s cameo came to an abrupt end when he was caught by Faf du Plessis, trying to hit Beuran Hendricks on the up.

Ajinkya Rahane showed just why he was a better choice as an opener than the out of form Shikhar Dhawan. He scored a thirty ball thirty-two, which includes some glorious shots along the way.

Virat Kohli came in needing to fulfil a familiar role, that of anchoring India’s chase. As usual Kohli seemed to be ready for the challenge. 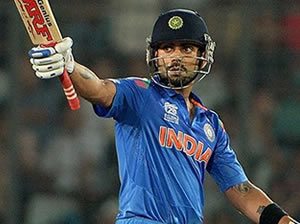 Yuvraj Singh and Kohli brought the target down to 51 needed of 30 balls. India’s chase was well on track as Kohli notched up his 50 off 35 balls in style, hitting Imran Tahir for a six.

But thats when Yuvraj fell to Tahir for eighteen as AB de Villiers took a good catch at long off. However the magnificent Kohli and Suresh Raina (21) ensured India cruised to an easy six wicket win. Virat’s unbeaten seventy-two made all the difference in the end. Kohli hit two 6s and five 4s in his innings.

Assessing what went wrong, Faf du Plessis said: “I think we could have been better with the ball. The extras we conceded. If you have to win the World Cup, you have to get those one per-centers right.”

“There was a sense of calm in the dressing room when we went out to bat. Everybody saw that the wicket was better than those we have played on, and they believed they could chase this down.” 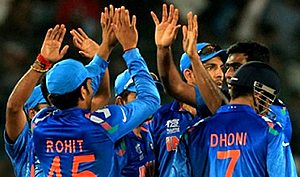 “There are not many who are as consistent as Virat. He grabs his opportunities. Something everyone needs to learn from him. Ashwin was brilliant. We kept him back for AB. The least I could offer Virat was the winning shot so I played out the last ball of the 19th over without a run,” he added.

Indian fans celebrated the win not just at home but in Bangladesh too. When asked about who is the best captain, best player and best team in the world, an Indian fan on Facebook said: “MS Dhoni, Virat Kohli and India.”

India is the only undefeated team in the competition and are one win away to becoming the first team to win the World T20 competition twice. India will play Sri Lanka in a South Asian final on Sunday 06 April, 2014.

Faisal has creative experience in the fusion of media and communication and research which increase awareness of global issues in post-conflict, emerging and democratic societies. His life motto is: "persevere, for success is near..."
Sri Lanka qualify for Cricket T20 final
T20 Cricket Final 2014 ~ India vs Sri Lanka