Akanksha Sharma gets Evicted from the Bigg Boss House

Akanksha Sharma is the latest Bigg Boss 10 contestant to get evicted from the house. DESIblitz has more on this calm natured but gritty contestant.

In Week 2 of Bigg Boss 10, the festival of lights, Diwali, brings in a lot of joy and celebration.

Celebrating this festival with her family will be the bubbly Indiawali, Akanksha Sharma, who found herself eliminated from the Bigg Boss house in the second week of the popular reality show.

Akanksha became a part of Bigg Boss 10, as a commoner with a determination to prove herself and give a stiff competition to the celebrities.

With a calm and composed mind, she charged through the various challenges presented by the Bigg Boss experience but didn’t let the intense atmosphere in the house affect her in any way.

And, because of her lively and friendly nature, she shared a cordial relationship with all the contestants in the house whether it was the Indiawale or the celebrities.

During her short stint on Bigg Boss 10, Akanksha Sharma, did not hesitate to take a stand and fight for her self-respect especially when a contestant from her own Indiawale team, Om Swamiji, made questionable remarks regarding her character during the ‘raaz’ task. 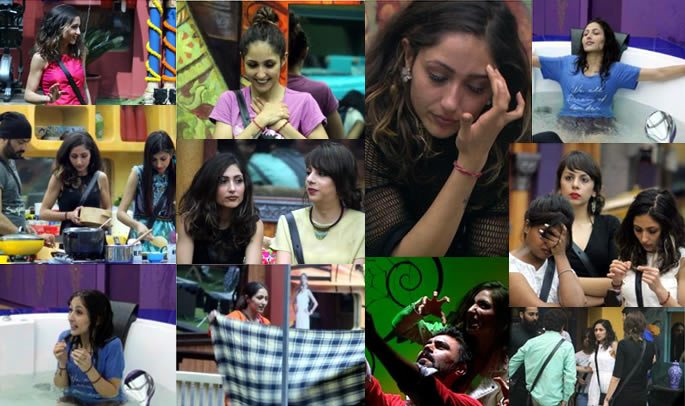 In just two weeks, Akanksha found a confidant in the fellow Indiawale contestant, Nitibha Kaul, and both of them became like peas in a pod.

Be it any activity, Akanksha Sharma, performed it with the utmost passion which clearly reflected her wish to be a strong player. Week 2’s BB laundry task was a clear example of that.

Akanksha displayed her smartness in the game by outsmarting celebrity contestant, Rohan Mehra, leading to her team’s victory. But, sadly she couldn’t win the audience hearts leading to her untimely exit from the show.

“They say that if you ask for something from the bottom of your heart, the wildest of your dreams can come true.”

“I feel blessed that I got the opportunity to share the stage with a legend like Salman sir; a surreal feeling. And, I feel lucky enough to have found many friends inside the house.

“Life is all about these magical moments and I will forever hold these close to my heart. I’m grateful to the almighty universe for fulfilling my crazy dreams.”