Ajay Devgn is the Fierce and Ferocious ‘Shivaay’

The picturesque shots of mountainous areas are a delight to the eye.

Shivaay opens an eye and wherever there’s evil, there will be destruction.

Along with Ae Dil Hai Mushkil, Shivaay is 2016’s big Diwali release. Whilst there might be an ongoing box-office battle between the two films, both ventures have huge expectations upon their shoulders.

From the trailer, Shivaay promises to be a gripping and enthralling thriller. So how good is this Ajay Devgn action flick?

The story begins in Nepal. Shivaay (Ajay Devgn) tours mountaineers on Everest and one day, he meets Olga (Erika Kaar). He falls in love with her.

After an intimate moment during an avalanche, he finds out that she’s going to be a mother. Unready to fulfil her maternal responsibilities, Olga returns to Bulgaria.

Time elapses and Shivaay’s daughter, Gaura (Abigail Eames) becomes adamant on meeting her mother, so they both go to Bulgaria. But one day she is kidnapped. Thus, Shivaay’s battle against flesh traders commences!

Post U Me Aur Hum, this is Ajay Devgn’s second directorial venture, with Shivaay being the complete opposite genre. But again, Ajay does a fairly decent job although there a few glitches. For instance, in a scene where Ajay is being chased by men firing a machine gun – he is hit by only one bullet if any at all. 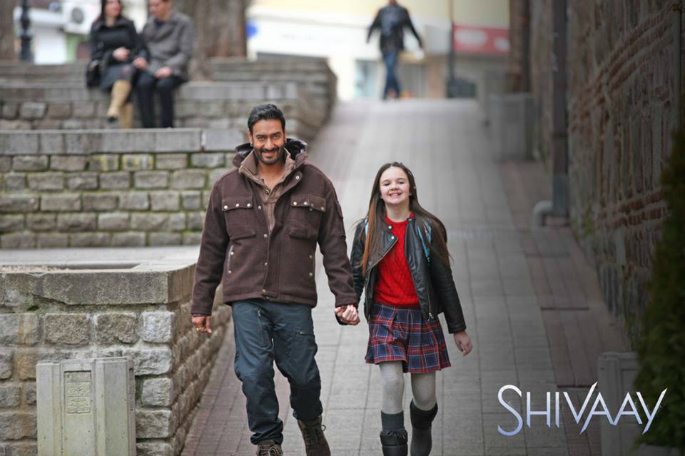 Also, the story draws parallel with Pierre Morel’s Taken. But it’s not a complete remake. There are a few Desi twists on it which work quite nicely!

Overall, Ajay fuses action with emotion very well. Plus, the picturesque shots of mountainous areas are a delight to the eye.

One must applaud Aseem Bajaj for his crisp and eye-catching cinematography. But what really stands out are the nail-biting action stunts. They will keep you on edge throughout!

Ajay Devgn is terrific as Shivaay. He plays a character you wouldn’t want to infuriate! Ajay’s chemistry with Erika and Abigail is very strong. It’s one of Ajay’s finest films of recent times.

Erika Kaar – being a Polish actress has a strong command of Hindi. Her body language and eyes are very expressive. She does very well!

Abigail Eames as Gaura doesn’t speak at all in the film. Her performance relies heavily on facial expressions and body language. She is phenomenal.

Sayyeshaa Saigal – grand niece of Saira Banu – makes an impressive Bollywood debut as Anushka, a young officer at the Indian embassy in Bulgaria.

Sayyeshaa portrays this role with ease. One looks forward to seeing what more she has to offer. 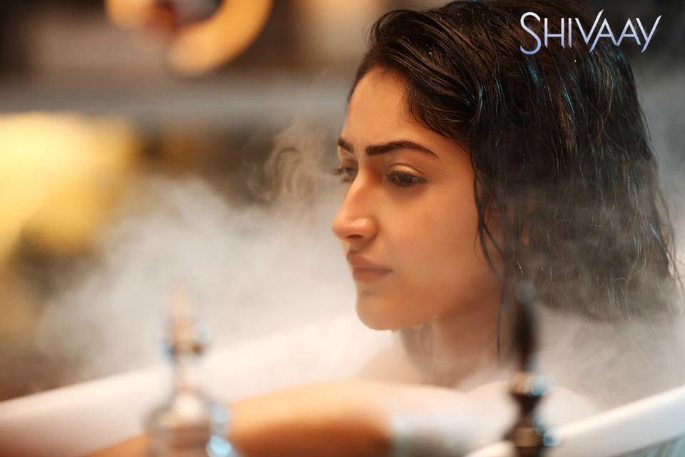 Vir Das is the icing on the cake. Essaying Wahab, the computer hacker, Vir’s swag and sense-of-humour helps to provide comic relief as well as to proceed the narrative. The rest of the cast members are also terrific.

What also stands out is Mithoon’s great soundtrack. ‘Bolo Har Har’ is an authentic fusion of rap (by Badshah) with Shlokhs. Truly a memorable track!

‘Darkhaast’, crooned by Arijit Singh and Sunidhi Chauhan, has romance written all over it. An instant winner.

This year’s singing sensation, Jasleen Royal, composes and croons another soothing track, ‘Raatein’. This song is catchy and compels the listener to hear it on repeat.

The final song ‘Tere Naal Ishqa’ has Kailash Kher at the central vocals, after a while. Whilst this isn’t an instant hit, the song grows on the listener. Generally, it’s a hit album!

Any downsides? The end seems to be slightly dragged out. One feels that this could have been edited by a good 10-15 minutes. In addition, it takes time for the characters and narrative to develop… So be patient!

On the whole, Shivaay is one of the better action films of 2016. Despite its deal of some flaws, the movie offers gripping viewing.

With Ajay Devgn at his best, Shivaay is a strongly recommended watch!