Contestants Lopamudra Raut and Mona Lisa got the temperature soaring inside the Bigg Boss House after taking a dip in the pool while wearing bikinis.

The Bigg Boss house is known to get stressful for the housemates. And the biggest respite they have is the swimming pool.

Tired after a long and exhausting luxury budget task, Bigg Boss 10 contestants Lopamudra Raut and Mona Lisa decided to take a break from the game and jumped into the pool for some fun and frolic.

Lopamudra, a model and beauty queen from Nagpur, opted for a sultry black bikini with gold embroidered embellishments. She tied her back in a high ponytail.

The two swam a couple of lengths of the swimming pool while soaking in some sun rays.

And, soon, the Indiawale team members assembled in the pool to check what was going on.

It all started with Manu taking a sneak peek at Lopa and Mona’s hot bikini outfits and ogling at them for a bit. 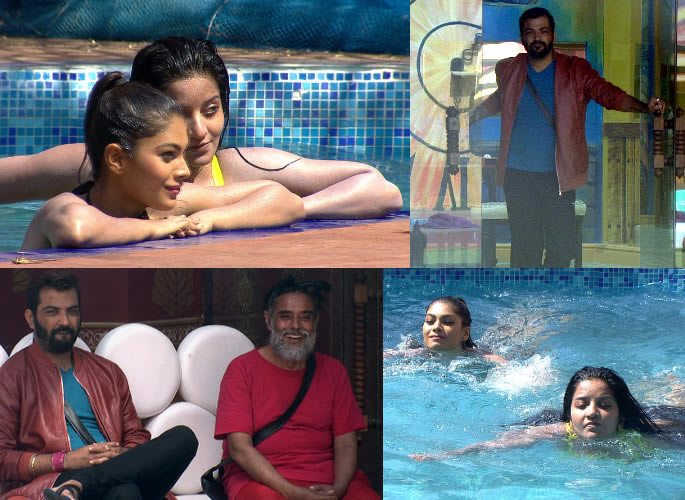 After which the sitting area near the pool quickly became filled with male contestants. Navin, Manveer, Manu and even Om Swami ji, all keenly observed the ladies as they took a relaxing dip.

But, their fun was short-lived as Mona scraped her shin while getting out of the swimming pool and went inside the bathroom area to change her outfit and put a bandage.

Once the pool was empty, Navin and Nitibha were overheard discussing the ladies’ choice of swimwear and the male contestants’ curious reactions to it.

NItibha was quick to defend Lopa and Mona by saying that it was totally their decision to wear whatever they liked as long as they were comfortable, and Navin obediently agreed!

With Lopa and Mona’s bikinis causing quite a stir amongst the Indiawale men, are these two ladies going to be their new favourites? Let’s wait and watch.

Mariya is a cheerful person. She is very passionate about fashion and writing. She also enjoys listening to music and dancing. Her motto in life is, "Spread happiness."
Ajay Devgn is the Fierce and Ferocious ‘Shivaay’
Karthik’s Pitch wins Team Task in The Apprentice Week 5