For the first time in the history of Bigg Boss an angry Salman Khan, evicted contestant Priyanka Jagga from the Big Boss 10 show.

In a dramatic turn of events, Bollywood megastar and host of Bigg Boss 10, Salman Khan, has thrown out Priyanka Jagga, from the Bigg Boss House.

Never before has any contestant been asked to leave the show by Salman. As per the format of the popular reality TV show, one or more contestants leave the house most often on a weekly basis, depending on public votes.

The contestant with who receives the least number of votes gets ousted from the Big Boss House.

This week, however, matters turned worse and volatile inside the Bigg Boss House.

While Salman Khan, held his customary interaction with the housemates as he was shooting the Weekend Ka Vaar episode, that is shot on Friday and gets broadcasted on Saturday, the foul-mouthed, Priyanka Jagga, irritated Salman to an extent that he lost his cool and asked Priyanka to leave his Home.

It all started when Priyanka sat on the Khalnayak kursi and Salman told her that she was the most aggressive and badly-behaved housemate of the show.

Priyanka Jagga jibed at Salman saying “Aur karungi main,” (I will do more of it).

This is when Salman Khan got angry beyond words. He told Priyanka Jagga that she is not allowed to show her ATTITUDE to him. 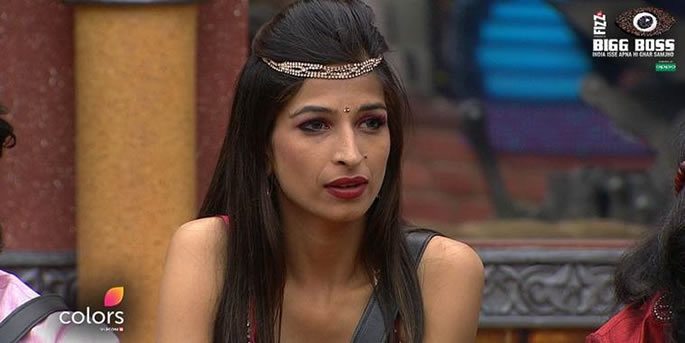 Priyanka Jagga, least expected that Salman Khan, would ask her to get out of the House, and she blurted out whatever came to her mind, shouting “I don’t want to stay here,” with tears in her eyes as other contestants of the Bigg Boss House watched in shock and dismay.

“Yeh sab drama hamare saath math karna”, (Don’t do this drama with us) lashed out Salman.

There was an eerie silence in the House as everybody seemed stunned at what was happening.

What’s more? Salman Khan warned Colors TV, that if at all Colors brings back Priyanka Jagga on the show or on Colors as such, he will disassociate himself with the entertainment channel and never work with Colors again.

He was seen throwing his coat from stage in disgust and extreme temper.

Priyanka Jagga Muise, as we can see, will go down in the history of Indian television as the most controversial and unbelievably irritating person on a reality TV show.

She was evicted from the Bigg Boss House in the very first week of the show and made a re-entry into the House as a wildcard contestant.

During her stints in Bigg Boss 10, she attracted the wrath of Bigg Boss fans on social media, for peeing in her pants during a task.

Priyanka Jagga picked fights with possibly every contestant of Bigg Boss 10, most often for no reason, targeting Monalisa and Lopamudra most of the times by making unacceptable personal remarks about both ladies and calling them names.

She managed to irk everyone with her sarcastic behaviour and stooped to a new low by commenting heartlessly on the death of fellow contestant Manu’s mother and the way in which according to her Manu had forgotten about his mother’s loss to re-appear on Bigg Boss as a contestant after he had left the show to perform the last rites of his mother.

Priyanka Jagga’s irresponsible statements and nonsensical manners have led to her being kicked out of the show.

The Saturday and Sunday episodes of Bigg Boss 10, this weekend, will unfold more details about how and what exactly transpired on the ill-fated Friday shoot of Weekend Ka Vaar with Salman Khan