"Both films are scheduled for release on November 13th"

Diwali 2012 will see the release of two of the most anticipated movies this year. Ajay Devgn’s Son of Sardaar and Yash Raj films Jab Tak Hai Jaan.

However, producer and actor Ajay Devgn is unhappy with Yash Raj films for their upmanship, and for gaining a hold over most of the multiplexes and Single Screen Cinemas across India. He has decided to fight against them, giving Bollywood pundits plenty of drama outside the big screen.

Jab Tak Hai Jaan is a love triangle set in London between Shahrukh Khan, Katrina Kaif and Anushka Sharma.  The film explores the life of Samar (played by Shahrukh Khan) over two different eras, his youth is spent as a musician in London, but he later makes the transition to becoming a mature officer in Kashmir.

Katrina Kaif’s character Meera had been described by the late Yash Chopra as a “seductress, who is an extraordinary beauty.” Anushka Sharma’s character Akira is a documentary film maker for Discovery Channel.

Jab Tak Hai Jaan also features the award winning duo of Gulzar and AR Rahman. AR Rahman has done the soundtrack and background score and Gulzar has written the poetic lines and lyrics to create a combination of pure, heart-moving melody. 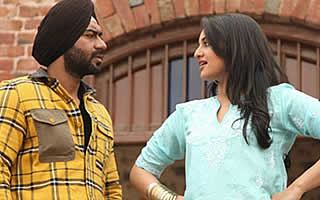 Son Of Sardaar is a romantic drama and tells the story of Rajveer Singh, who is played by Ajay Devgn. Rajveer is a happy-go-lucky sardaar from London, who falls in love with the beautiful Jiya (Sonakshi Sinha) during a trip to India.

His idyllic life is abruptly shattered to pieces when it is revealed that Billu Paji (Sanjay Dutt) is out to kill Rajveer due to a family feud which began over three generations ago.

Son Of Sardaar turns into a cat and mouse game, with plenty of humour, confusion, drama, never before seen action sequences, great music and emotion.

Both films are scheduled for release on November 13th 2012. Amidst rumours that Shahrukh Khan and Ajay Devgn had a more personal feud, Ajay Devgn said:

“The fight is not between Shahrukh and Ajay Devgn and there is no fight between us…This is Ajay Devgn as a producer, fighting for his right with some other producer and if people are playing with it then it’s wrong.”

The complaint was filed before the untimely death of Yash Chopra. Ajay Devgn added: “We filed the case on Oct 18th, when we hadn’t even thought that Yashji will be hospitalized. Main problem was that the timing went wrong…If I release the film on the same day, then people will call me a villain and if I don’t release it, it’s a major loss for us.” 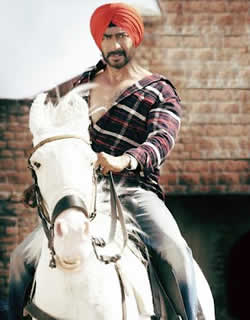 Ajay Devgn accused Yash Raj Films of striking deals with single screen theatres before the release of Ek Tha Tiger. The deal was rumoured to be that if they wanted to screen Ek Tha Tiger, then they would have to agree to exhibit Jab Tak Hai Jaan on Diwali.

On the 8th November Yash Raj Films released a statement on the issue:

“In a free competition Ajay Devgn admits that the cine-goers will decide the film that they wish to see. With both the films having opened on the same day, the cine-goers already seem to have expressed their verdict. Even as we go to press with this release, we are being approached by a large number of theatres with offers to screen our film. It is unfortunate that our refusal to comment has led to aspersions being cast on YRF’s business practices, which have always been ethical and of the highest standards.”

The Competition Appellate Tribunal refused to delay the screening of Jab Tak Hai Jaan but did issue notices of an inquiry because of Ajay Devgn’s plea. “We desist from passing any order,” it said and noted that “it would not be proper on our part to freeze the agreements” between Yash Raj Films and the single screen film exhibitors.

Ajay Devgn has to put all of this controversy behind him, and shed any negative press and fast.

Devgn is all set to work with Jab Tak Hai Jaan actress Anushka Sharma, in his next movie entitled Matru Ki Biwi Ka Mann Dola. The movie will be directed by Vishal Bhardwaj, who is famous for the films Kaminey, Omkara and more.

However, another twist entered the saga of these two films; the support of Salman Khan for Son of Sardar. Salman stepped in for good friends Ajay Devgn and Sanjay Dutt to shoot a promotional song for the film called ‘Pom Pom’.

Then Salman tweeted on Twitter sending out a warning to not mess with his good friend Ajay Devgn, saying: “Pathan Ke Yaar Se Panga Mat lena. Sorry yaar..Diwali bekaar without Son of Sardaar.” This is of course is a step taken by Salman to show SRK that he is siding with the opposition in this case.

Both films have their merits and no doubt following in terms of fan base and they will be watched by who loves who. However, this does shed light on monopolising wars and show of muscle amongst Bollywood stalwarts to manipulate cinemas as required in India. Not something you would readily see in the West.

Faisal has creative experience in the fusion of media and communication and research which increase awareness of global issues in post-conflict, emerging and democratic societies. His life motto is: "persevere, for success is near..."
Chakravyuh explores Naxalism
No Love Between Shahrukh and Salman