Starring some of the finest actors in Bollywood, Chakravyuh is the latest edition to director Prakash Jha’s filmography. The film stars Arjun Rampal and Abhay Deol and explores the controversial topic of Naxalism in India. Desiblitz caught up with the cast and director to find out more.

Award Winning, and critically acclaimed director Prakash Jha, is back with the hard hitting social message movie Chakravyuh. The movie is brought to you by Eros Entertainment and Prakash Jha Productions.

Chakravyuh, has a huge ensemble cast, and stars the likes of Arjun Rampal, Abhay Deol, Esha Gupta, Manoj Bajpai, Kabir Bedi, Anjali Patil and Om Puri. The movie is directed by one of the finest and brave directors in Hindi cinema, Prakash Jha, who is not afraid to bring up social topics which affect India. 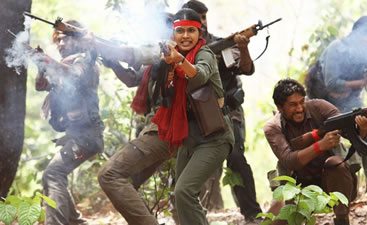 We last saw Prakash Jha direct Aarakshan, which starred Amitabh Bachchan, Deepika Padukone, Manoj Bajpai and Saif Ali Khan. The film was a hit and was based on the topic of reservation in the education system in India.

Unfortunately Aarakshan came into a lot of controversy from the Censor Board, and it was banned in some states in India. This affected the overall box office performance of the film. Prakash Jha, has ensured with Chakravyuh, he has taken all precautions with the film, to secure the movie has a wide release, with no bans or cuts.

It was recently announced the writer of the film, Anjum Rajbali, had written Chakravyuh in 1995 with Amir Khan and Shahrukh Khan in mind. He pitched it to Rajkumar Santoshi, however it did not work out then and finally, when pitched to Prakash Jha, he instantly said yes. 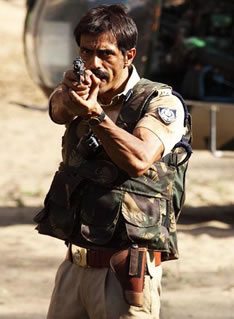 Chakravyuh tells the story of Adil, who is a cop and is played by Arjun Rampal, who is assigned the task of going into the Naxal territory to clean up the area.

The naxal leader is played by Manoj Baipai and he dictates the army of Naxals to fight for their freedom. Arjun Rampal’s Friend Kabir, who is played by Abhay Deol is forced to go into the naxals to help Adil in his mission.

However Kabir and Adil’s friendship is put to the test when Adil see’s the real India and the suffering that is hidden in the media. The film tells an extraordinary story of six characters, each with a dream to fulfil.

Chakravyuh deals with a relevant social issue, currently happening in India on the Naxalites. The Naxals are operating in different parts of India, and are declared a terrorist organisation. The motives of the naxals is to fight to have a better democracy, who respects everyone and not just the upper class.

Desiblitz met up with director Prakash Jha, and popular actors Arjun Rampal and Abhay Deol, on why this film is a must see, and is a wakeup call to the Indian society.

Prakash Jha spent time with Naxals whilst piecing Chakravyuh together, to ensure the movie was accurate. In an interview Prakash Jha said in the opening of the film he inserted a slide stating that 100% of the film was accurate and based on real people. 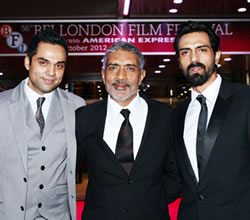 In an interview director Prakash Jha said: “We look at the problem 360 degrees, and present it as a background for this emotional story of two friends which I have set in this film.”

Chakravyuh was filmed in real Naxal type locations and actress Esha Gupta said in an interview it was to “get a feel of what it is like to be in a war.”

“This is, without doubt, Arjun Rampal’s most accomplished act. On the whole, CHAKRAVYUH is an engaging drama. It chronicles a burning issue, but is entertaining concurrently, something that Prakash Jha balances beautifully in film after film. Watch it!”

Chakravyuh an Eros Entertainment production released worldwide on the 24th October 2012 and definitely worth a watch.

Priyal has a huge passion for Bollywood. He adores attending exclusive Bollywood events, being on the sets of films, presenting, interviewing and writing about films. His motto is “If you think negative then negative things will happen to you but if you think positive then you can overcome anything.”
Saif and Kareena are now ‘Saifeena’
Ajay Devgn takes on Yash Raj Films