Saif and Kareena are now ‘Saifeena’

Glitz and glamour have always surrounded Saif and Kareena, the two darlings of Bollywood are now united as ‘Saifeena’ in marital bliss!

The couple have received wishes from none other than Brad Pitt

Though it was first meant to be a small, private family affair, Saif Ali Khan and Kareena Kapoor’s wedding soon turned into a lavish ceremony with all the decadent designer names and the famous celebrity guests that media moguls and Bollywood enthusiasts were desperate for. The couple are now known as ‘Saifeena’.

Between October 13th and 18th 2012, a number of functions made up the colossal line-up of events, including a pre-wedding party that included a choreographed dance as performed by Karisma Kapoor and other members of the family.

The dance was directed by none other than legendary Karan Johar. Other events included a mehndi ceremony, a gargantuan reception party, and of course the registry wedding itself. 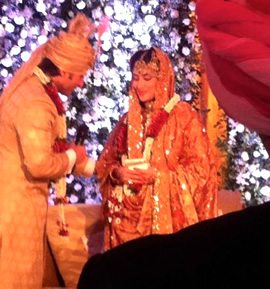 After the lavish reception at Mumbai’s 5-Star Taj Hotel, the royal couple had another function, a Mughal-themed party in Delhi at a large government bungalow. It proved to be a most fitting venue for the Nawab and Begum of Pataudi with antique furnishings used as part of the decoration, some of which date back to over 200 years ago.

Every corner was adorned with jasmine and rajnigandha flowers, with an off-white and gold colour theme pervading throughout. The guest list numbered just under 600, and included high profile political figures such as Sonia Gandhi, Pranab Mukherjee as well as family and friends from the sports and Bollywood scene. 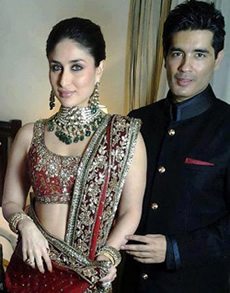 Designer Manish Malhotra had been keeping fans updated through Twitter on Kareena’s many outfits, and had told fans that Kareena would be wearing either a pink and blue or a green sari for the occasion.  In actuality, Kareena, 32, attended the gala Mughal-themed event wearing an “old world gharara” in different shades of pink. Saif Ali Khan donned a Raghavendra Rathore creation that was inspired by his father’s own wedding attire.

Speaking of bridal-wear, Kareena Kapoor Khan looked nothing short of spectacular throughout the ceremonies.

At a small Sunday celebration, she looked resplendent in a Manish Malhotra designed orange lehenga with a golden blouse, teamed up with a classically beautiful heavy emerald necklace, green bangles and flowers in hair, while Saif was seen in a classy all white ensemble.

The pair looked fantastic, so much so that reporters mistakenly thought that Sunday’s “fun party” at Kareena’s Bandra apartment was actually the sangeet party!

Though the party was a small affair, the assembled media tried desperately get more information and catch the gossip, which led to broken cameras and minor scuffles amongst journalist and citizens alike!

It was interesting that Amitabh Bachchan’s daughter Shweta also attended the celebrations, especially because her husband is Kareena’s cousin. Their relationship has been strained for some years now, ever since the engagement between Abhishek and sister Karisma Kapoor was severed. Could this set the foundations for bridges being rebuilt? 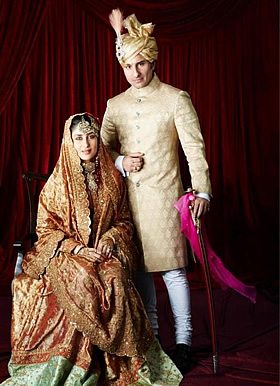 Kareena now known as Kareena Kapoor Khan, has become Begum of Bhopal, and the couple have received wishes from none other than Hollywood star Brad Pitt saying:

“Saif and Kareena can be called Bollywood’s sexiest couple … I wish them a happy married life.”

Even Saif Ali Khan’s ex-wife Amrita Singh, who wed Saif in 1991, gave her blessing to the couple.

Saif’s two children from the ex-marriage attended the wedding. You’d think this would create a lot of tension but Ibrahim, 10, and Sara, 16, have a great bond with Kareena. “I love them alot and get the same love and respect from them. They are growing up fast. Sara looks so lovely,” says Kareena.

But it would seem that not everyone is happy for Bollywood’s answer to Brangelina.

As early as March, Rakhi Sawant attended the Radio Mirchi Awards and had this to say:

“I love Kareena and I am really happy that Kareena will get readymade kids. No, Kareena! You deserve a better husband! You deserve Shahid…I am saying it from the very first day that Shahid Kapoor is the best! He is a bachelor and she (Kareena) is a spinster! You know, I like Saif, but his kids are so old! Kareena Ko Readymade Bachche Milenge”

It would seem that Rakhi is not the only one who feels that Saif Ali Khan and Kareena Kapoor are not the perfect match for each other. 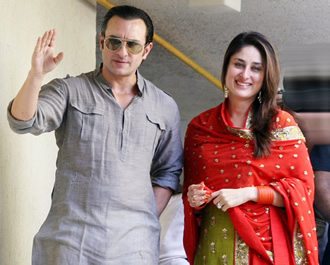 Despite the pair having tied the knot and seeming happily in love, fans of the Kareena and Shahid Kapoor pairing are still as vocal as ever, with “Shareena” supporters starting Facebook groups and continuing to post derogatory comments on public forums such as Twitter and Youtube.

It remains to be seen how principled these fans will remain, and whether their protests will negatively impact the reception of their future films at the Box Office. Saif Ali Khan is currently shooting for Race 2, which is due to be released next year. Meanwhile, Kareena Kapoor Khan has been working on Talaash, which will be released later this month.

But the newly-weds are already at the centre of controversy. Director of Talaash Reema Kagti confirmed that Kareena will continue to use her maiden name in the film’s credits and title screen. Considering audience and the entertainment industry’s poor reception of  married actresses, this might have been a necessary move to try and bolster the movie’s  success upon release.

This could just be the beginning of many challenges that the new couple might have to face in the future with rumours circulating that Kareena and Saif will be putting their work on hold to prepare for a romantic trip together to the Swiss Alps during the Winter holidays.

Work could be put on hold for other reasons, especially in the case of Kareena Kapoor Khan. With Aishwarya Rai Bachchan having been pulled from Heroine after finding out she was pregnant, producers and directors could end up showing the same wariness when considering Kareena for a role in their films.

It seems that controversy will follow the royal couple for the foreseeable future and it’s clear that Bollywood now has ‘Saifeena’ to talk about.

Simi has a thirst for anything to do with classical music, arts and literature. She can't function without playing the piano at least once a day. Her favourite quote is "Enthusiasm is excitement, with inspiration, motivation and a pinch of creativity."
Bollywood loses legend Yash Chopra
Chakravyuh explores Naxalism