Kareena Kapoor Khan has given birth to a baby boy! Making Saif Ali Khan a daddy for the third time with lots of celebrations to follow by the Kapoors!

“The baby is fine and so is Kareena. All of us are absolutely delighted"

Kareena Kapoor Khan has given birth to a baby boy! Making Saif Ali Khan once again a daddy.

Kareena delivered her baby at a suburban hospital, not far from her residence in Bandra, Mumbai, India.

Proud father, Saif released an official statement thanking fans and friends for their support over the last nine months:

“We are very pleased to share with you all the wonderful news about the birth of our son: Taimur Ali Khan Pataudi, on the 20th of December 2016.

“We would like to thank the media for the understanding and support they have given us over the last 9 months, and of course especially our fans and well wishers for their continued affection.”

“Merry Christmas and a happy new year to you all…With love, Saif & Kareena.”

When recently talking to media about having a boy or girl, Kareena said: “The strange part is that Saif and I have never really asked ourselves whether we want a boy or a girl.

“It’s the first time, so we want what God has decided for us. That’s why we haven’t even thought of names. Saif loves surprises, and he likes the excitement of not knowing. So he said ‘Listen, let’s just keep it at that.” 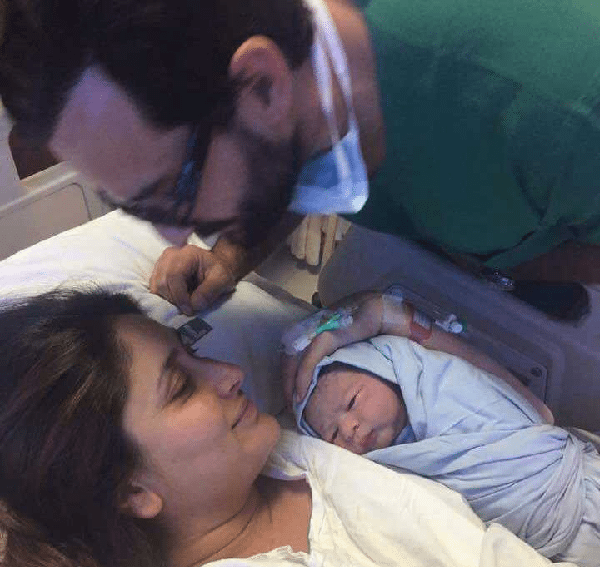 Congratulations have poured in from Bollywood as the news broke in the early hours of Tuesday morning:

Prior to the delivery, there were rumours that there were complications with the pregnancy. But her father, Randhir Kapoor quashed all the rumours and stated that both mother and baby were doing fine and preparations were on the way to welcome the grandchild into the famous Kapoor household:

“We are very happy. The baby is fine and so is Kareena. All of us are absolutely delighted,” Bebo’s father said. It is thought that the entire Khan and Kapoor families were at the hospital as Kareena was due to give birth.

Right up to the end, Bebo did not shy away from flaunting her baby bump and appeared on magazine covers and photoshoots, giving style ideas to mums-to-be. The mother of the baby boy recently won the Glamorous Diva of the Year award at the LUX Golden Rose Awards.

She has shared her life as a pregnant mother and now no will be most likely be sharing motherhood. With lots of snaps of the new family along with papa Saif Ali Khan.

Kareena Kapoor Khan has been reported to say that she will back to acting in films soon after the birth. When asked at an event by actor Arjun Kapoor, she replied: “I will be back on my toes within a month of my delivery.”

We are sure that this little Khan is bringing a lot of joy and excitement to both the Khan khandan and Kapoor khandan.

Nazhat is an ambitious 'Desi' woman with interests in news and lifestyle. As a writer with a determined journalistic flair, she firmly believes in the motto "an investment in knowledge pays the best interest," by Benjamin Franklin.
Rahul Dev gets Evicted from the Bigg Boss House
Deepika Padukone’s Journey to Stardom