Who does Taimur Ali Khan resemble ~ Kareena or Saif?

Ever since his birth on 20th December 2016, fans discuss on who Taimur Ali Khan resembles most – Kareena or Saif? Let’s find out with these adorable pics!

Taimur Ali Khan has easily become one of Bollywood’s favourite child stars. Since his birth on 20th December 2016, fans have been in awe to see his growing collection of photos.

With his cute cheeks, adorable eyes and cheeky smile, his popularity has skyrocketed. So much so that the Indian paparazzi are keen to snap more photos of him rather than his famous parents, Kareena Kapoor Khan and Saif Ali Khan.

Speaking of his mother and father, one question has been on the lips of every fan: Who does Taimur look more like?

Of course, the answer is divided amongst everyone. While some believe he resembles his beautiful mother, others feel he has a striking similarity to dashing Saif.

Let’s then take a look through his gorgeous photos to see who of the two he resembles most! 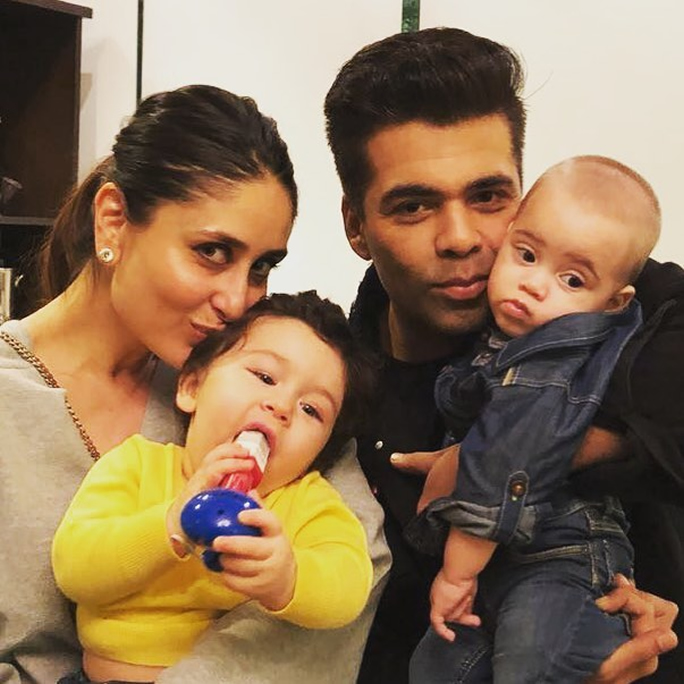 Taimur stole the show when he appeared at the birthday party of Adira Chopra. While this marked new photos of Karan Johar’s twins, Tamiur looked totally cute wearing a bright yellow top and jeans.

In this image, Kareena and Karan pose with their darling children. While the director’s son Yash gazes away from the camera, Taimur looks ahead with cheeky eyes. His mother plants a loving kiss on his head, while he chews a large, plastic toy.

With the mother and son close-up, we can see their similarity. Both share olive-green eyes and raven locks; perhaps then the little boy resembles his mother more?

Having Fun with Flowers 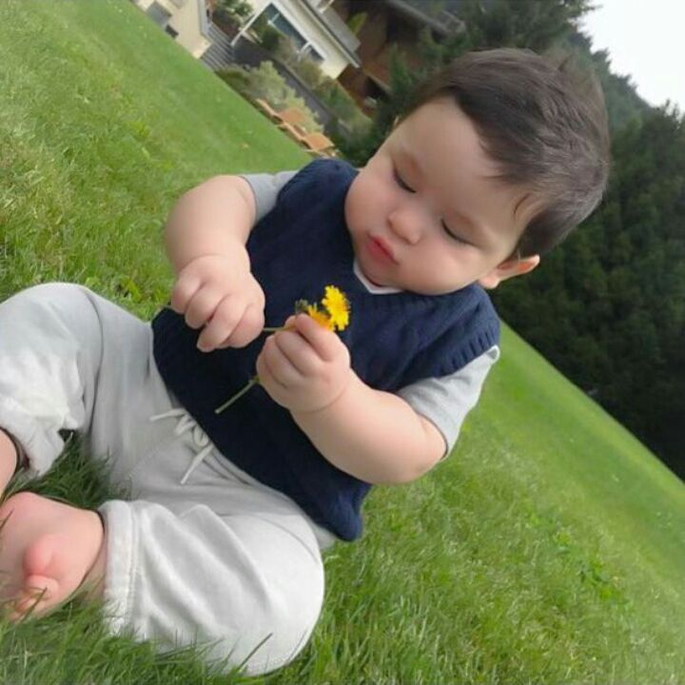 The toddler dons a smart-casual attire, wearing a blue, sleeveless jumper over a grey top and sweatpants. Playing outside a garden, he shows a keen interest in two dandelions. Looking down at the flowers, one can really see Taimur’s beautiful cheeks!

His hair is neatly styled, with his fringe swept to one side. What a handsome, charming boy!

We can’t help but feel this image really highlights how Taimur looks like his father, especially with his smart hairstyle. 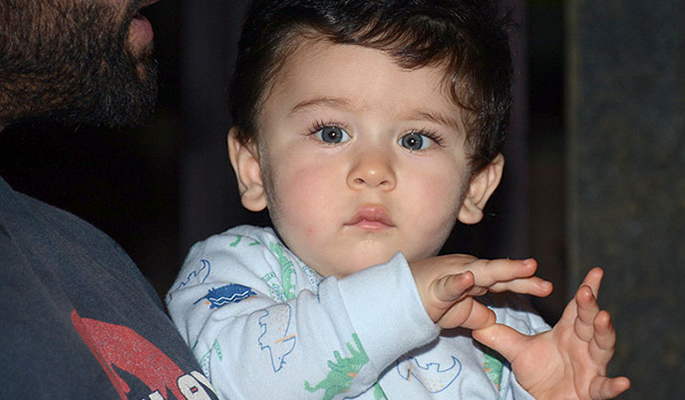 In this photo, Taimur is snapped by the paparazzi, looking absolutely adorable. He wears a blue onesie, decorated with dinosaur patterns. One has to admire how Taimur feels completely at ease with the photographers.

Gazing at the camera, we can see the child’s cute looks. Colourful eyes, long lashes and a small pout, he certainly has Kareena’s trademark features.

Playing on a Swing 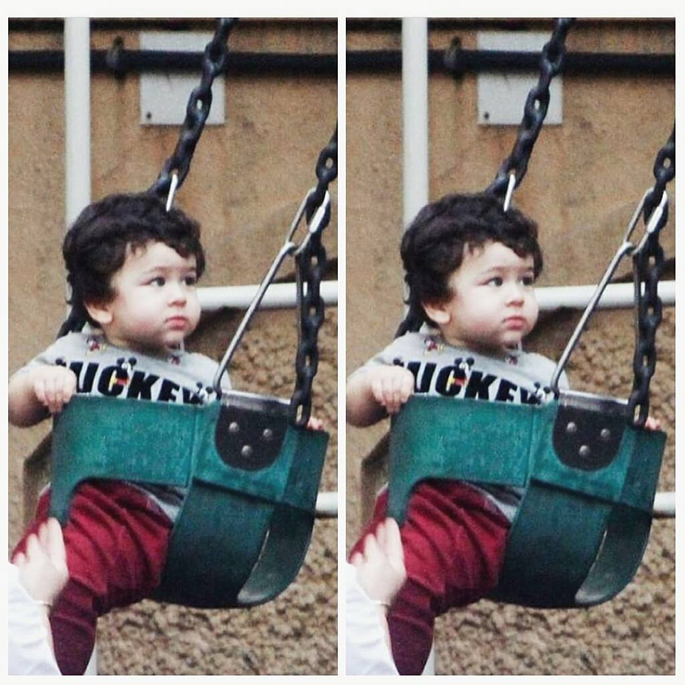 We’ve seen Taimur have plenty of fun on his swing; perhaps it could be his favourite toy?

The little toddler wears red trousers, along with a grey, Disney-themed shirt. With black, bold letters reading “Mickey” and graphics of the famous character scattered across, this looks utterly delightful on Taimur.

As the little boy chills on his swing, with his growing hair in a casual style, we reckon he looks the spitting image of Saif. Wouldn’t you agree? 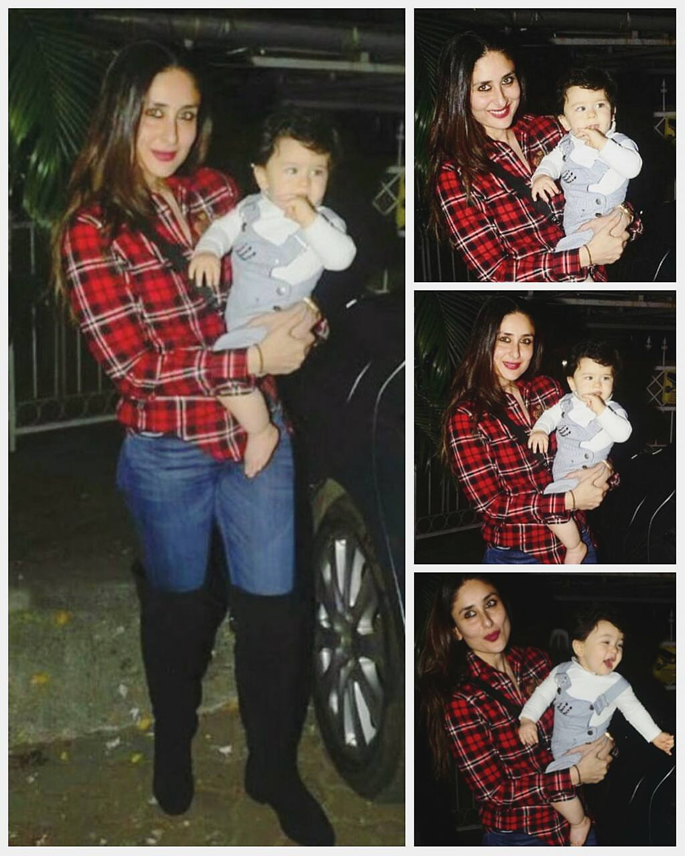 With his mother Kareena, she carries him while photographers take numerous photos of the two. While the actress looks chic in a red, plaid shirt with jeans and knee-high boots, it’s Taimur that turns heads.

He wears blue dungarees with a white shirt, but everyone went gaga over his cute expressions. From appearing curious to looking happy with a beaming smile, Taimur shows off his fun, adorable nature.

We can imagine that when Taimur makes his already anticipated Bollywood debut, he has the natural talent to shine as a star. Perhaps he has inherited a mix of both Kareena and Saif’s talent as well as their looks?

You own my heart you own it aaaa love you my pukuluuu love you so much ??

Taimur really raises the cuteness factor with the enjoyable video, supposedly taken at Pataudi Palace in Hyderabad. While the toddler’s nanny holds him, actress Jacqueline Fernandez can be heard interacting with him as she holds the camera.

Right on cue, Taimur stretches out his hand to Jacqueline and the camera, as if to say he is! While the two women laugh, the little boy continues to look at the camera, perfectly resembling his father. 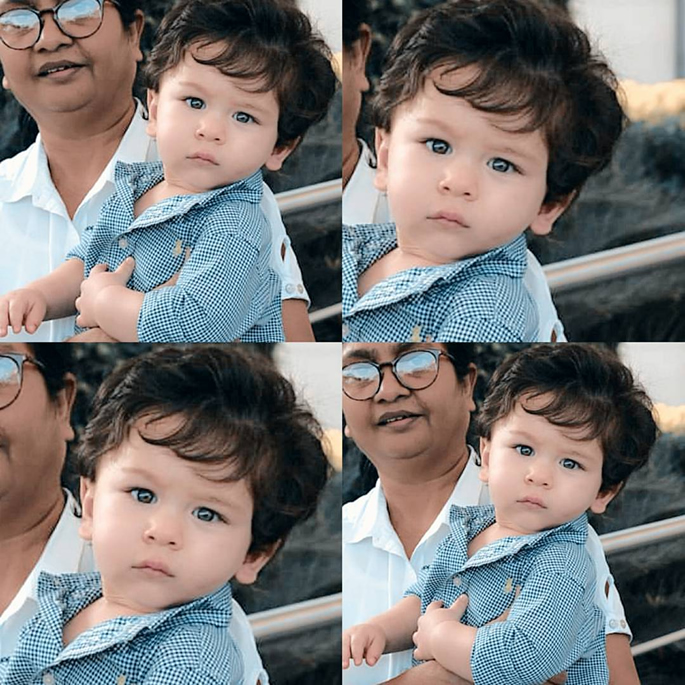 In the final image, Taimur takes our breath away with this delightful expression. He wears a gingham shirt with trousers, while his nanny carries him. With his growing tousled in a casual style, the little boy looks utterly angelic.

We have to admit, he looks remarkably similar to Kareena and Saif. While he has Bebo’s beautiful eyes and pout, he certainly resembles Saif with his adorable gaze at the camera.

With these photos, one can see how Taimur shares a close resemblance to both his mother and father. As he grows up, we’ll eventually see who he looks the most like – perhaps he will take more to Kareena? Or even Saif?

One thing is for certain though – he’ll likely follow both their footsteps in Bollywood. While we will have to wait many years for his debut, fans will continue to go gaga over Taimur’s gorgeous photos.

But let’s turn the question to you – who do you think little Taimur Ali Khan looks more like? Have your say in our poll below!