Kareena matches with Saif & Taimur for The Rolling Stones

Kareena Kapoor, Saif Ali Khan and Taimur opted for matching outfits as they attended The Rolling Stones concert in London.

Kareena Kapoor is making the most of her time in London as she attended The Rolling Stones’ concert in Hyde Park along with Saif Ali Khan and Taimur.

The actress shared photos of the trio wearing matching outfits.

In the pictures, the trio wore black t-shirts bearing The Rolling Stones logo.

While Saif and Kareena paired their look with leather jackets, their eldest son Taimur wore a grey hoodie.

All three completed their outfits with blue jeans and white trainers.

Taimur went one step further by having his hair spiked up.

In the first picture, Kareena posed with Taimur and wrote: 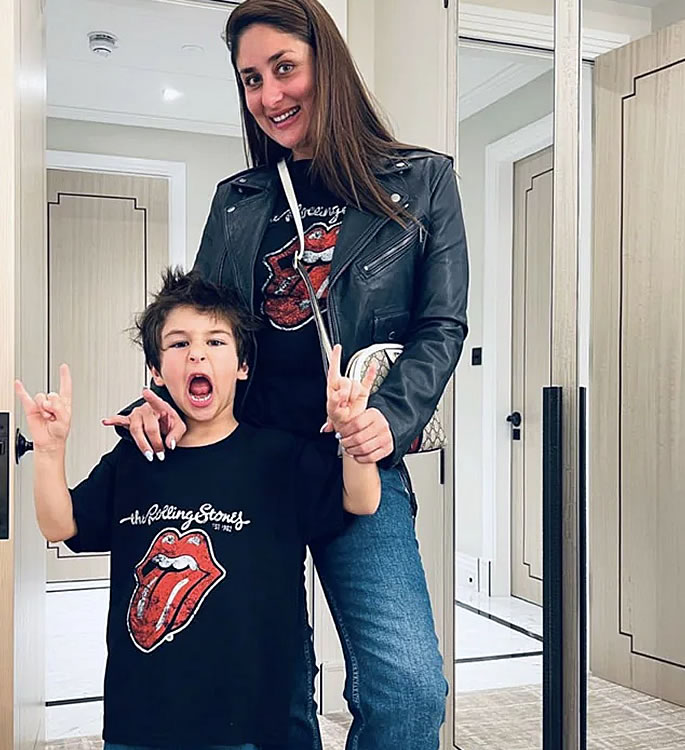 The second picture featured the family set to head out to the concert, with Kareena writing:

A video from their outing later went viral, showing Taimur sitting on Saif’s shoulders as the trio enjoy the concert.

Kareena Kapoor flew to London after completing the filming of her Netflix debut directed by Sujoy Ghosh.

The film is based on the Japanese novel The Devotion of Suspect X and also stars Jaideep Ahlawat and Vijay Varma.

Kareena previously said: “I can’t wait to begin work on this exciting project.

“It’s one that has all the right ingredients – a great story, a visionary director and a super talented cast and crew.

“I am really looking forward to working with Sujoy, Jaideep, and Vijay.”

“It’s the beginning of an electrifying journey and I can’t wait for audiences worldwide to see this global bestseller come to life.”

Kareena is currently gearing up for the release of Laal Singh Chaddha opposite Aamir Khan.

After numerous delays, the film will release on August 11, 2022.

He had said: “Pushkar and Gayatri are quite the dynamic duo with great creative energy and it’s been very rewarding working with them.

“A complete icing on the cake and elevating experience for me was working with Hrithik and doing some intense action scenes,”

Dhiren is a journalism graduate with a passion for gaming, watching films and sports. He also enjoys cooking from time to time. His motto is to “Live life one day at a time.”
Alia Bhatt & Ranbir Kapoor announce Pregnancy
Priyanka Chopra shares pics from Romantic Getaway with Nick Jonas