Will Smith attends Premiere of Netflix Bright in India

Crowds gathered in Mumbai to see Hollywood actor Will Smith as he attended the premiere of his new Netflix film Bright – a ‘fantasy-meets-action’ flick.

"Thank you for having us. We are very excited to be here."

Will Smith hails as a Hollywood icon celebrated by fans worldwide, including India. It’s no surprise he attracted huge crowds when he attended his new film premiere in Mumbai.

On 18th December 2017, his new, Netflix-produced flick Bright premiered in the city.

While Will and his co-stars appeared on the red carpet, so too did many famous faces of Bollywood. The US star seemed in great spirits as he posed for photos with many of his fans.

He arrived at the premiere in lavish style as he wore a smart suit. Donning a metallic, blue co-ord with a light shirt and tie, Will looked utterly suave. Speaking to reporters, he revealed his excitement of visiting India:

“Thank you for having us. We are very excited to be here. This is my first time out today. We landed in the morning, have been doing press interviews and then came to see you.”

His co-stars Noomi Rapace and Joel Edgerton also graced the red carpet. Noomi wore a silvery blazer and skirt co-ord, decorated with colourful, floral graphics. She kept her blonde hair in a short bob, with a heavy fringe.

Joel donned a brown blazer, along with trousers and a white shirt. Opting for no tie, he left the collar unbuttoned, achieving a smart, yet relaxed look. 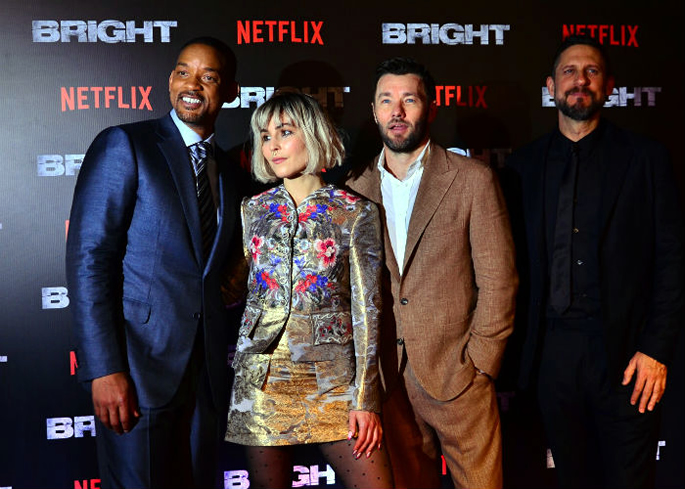 Bright will release worldwide on Netflix, on 22nd December 2017. It offers an edgy, alternative look at fantasy; set in a modern-day world where humans live and work with mythical creatures such as elves, orcs and more.

Will Smith stars as Daryl Ward, a human cop who has to partner up with orc Nick Jakoby (Joel Edgerton). They soon embark on an action-packed, thrilling adventure involving a magic wand. Certainly, this ‘fantasy-meets-action’ flick seems intriguing and exciting. 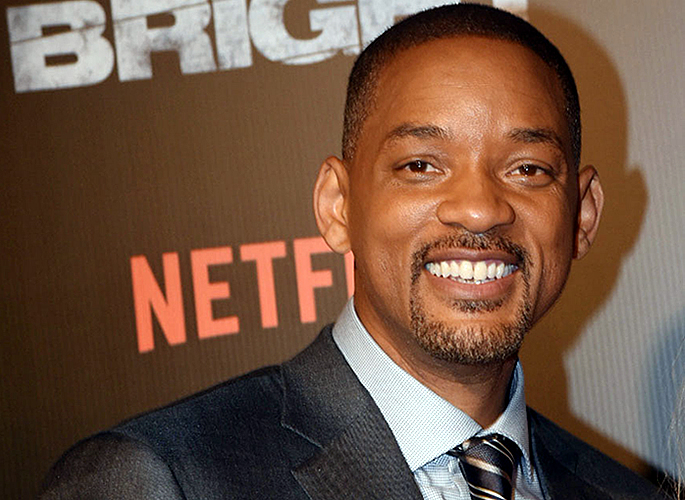 During the event, the Hollywood actor spoke on the film’s important message. One of tackling racism within society. He said:

“The movie has beautiful ideas about racism and how we treat each other. In this film, the elves in the film are top of society, so they represent those who have and the Orcs represent those who do not have. And the humans are in the middle of this fantasy world.”

“So, the film is an interesting exploration about how we treat each other.

“What we love about science-fiction is that you get to go in this fantasy world but you are dealing with real things. Because it is a fantasy world, you find it easier to digest it all than when we are talking about actual social issues.” 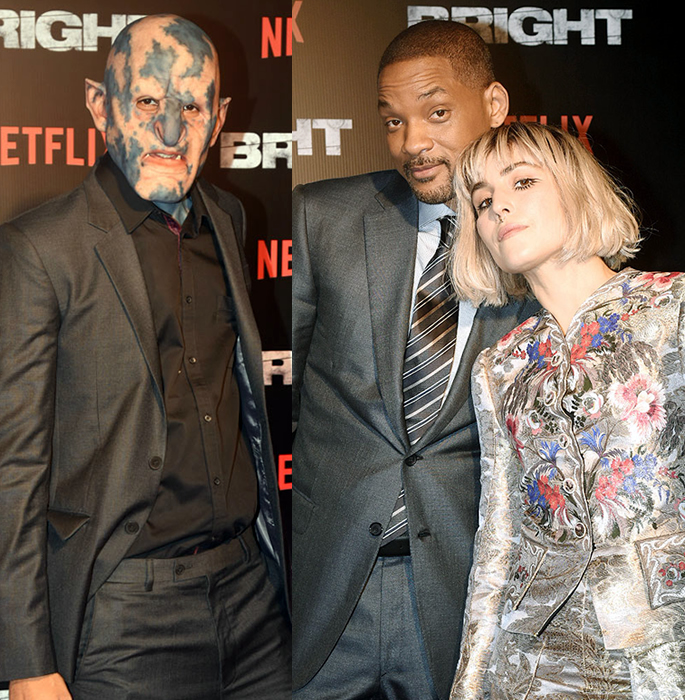 This premiere doesn’t mark Will’s first time in India. During 2016, he was spotted at actor Akshay Kumar‘s massive party, which featured a host of B-Town celebrities. The global star spoke of his time at the bash:

“Last year, Akshay had a party and it was the best food that I have ever in my life. It was a little bit of everything. My favourite is chicken tikka masala.”

We’re sure many fans would love to see Will in a Bollywood film! Could you imagine him starring alongside the likes of SRK or Aamir Khan? 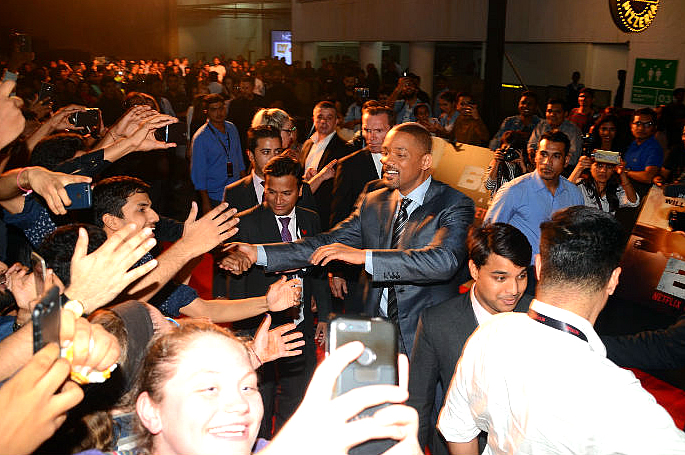 As mentioned, many Indian stars graced the red carpet, sizzling in their jaw-dropping outfits. For example, Pooja Hegde wowed in a bright, white costume. She matched a sleek blazer with a pair of tiny short, showing off her toned legs.

She added nude heels to the outfit and styled her raven hair into soft waves, cascading down her back. Meanwhile, Rakul Preet Singh opted for the LBD (little black dress) look, wearing an enchanting, short dress. Decorated with tassels, it certainly turned heads.

With her long hair styled into a ponytail, Rakul wore red lipstick to inject some vibrancy. 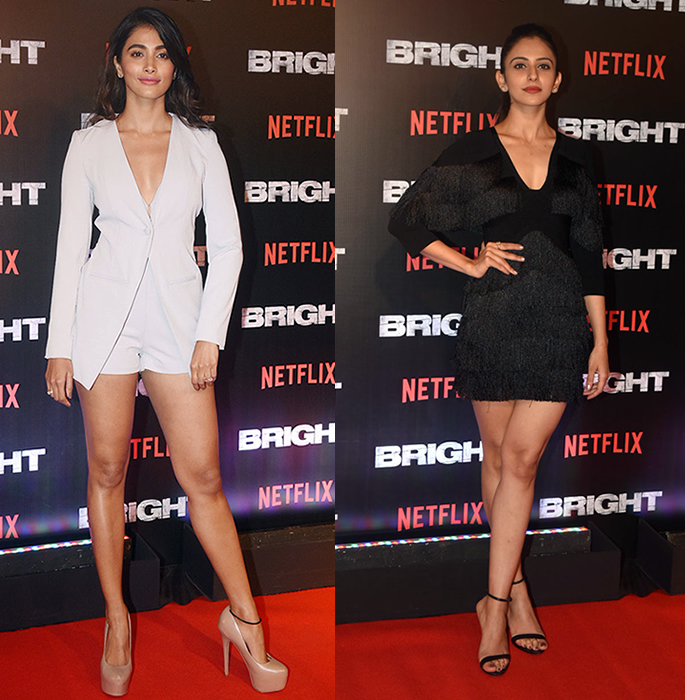 Also walking the red carpet was talented singer Armaan Malik. He kept to a casual code, wearing a high-neck, black shirt with trousers. A silver chain adorned his neck, while he added a smart hat to his look.

Iulia Vantur, the ‘girlfriend’ of Salman Khan, also looked stunning at the premiere. Wearing a velvet, designer gown, she added glamour to the outfit with gold, bejewelled earrings. She kept her chestnut hair sleek and straight with a middle parting. Truly a superb look! 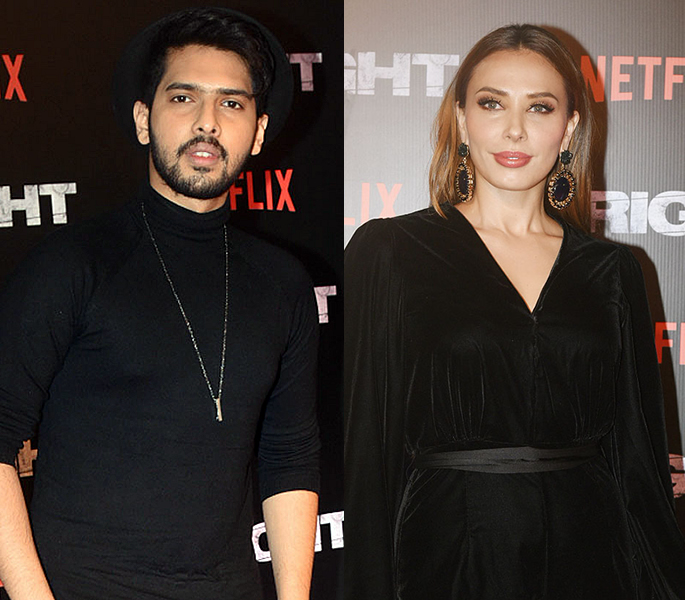 Overall, the premiere hailed as a successful event for Will Smith and his co-stars. With many fans attending, waiting to catch a glimpse of the superstar, his popularity in India continues to grow!

Make you sure you don’t miss Bright, released on 22nd December 2017!