A Bright Future for Microsoft at Build 2015?

Microsoft’s annual Build Developer Conference continues to excite many around the world. DESIblitz picks out the hottest new features coming your way!

“Windows 10 is not just another release of Windows, it is a new generation of Windows.”

In its annual developer conference that ran from April 29 to May 1, 2015, Microsoft has shifted its focus away from just software engineers.

Themed ‘The Next Generation of Modern Apps This Year’, Build 2015 appealed to consumers by showing off a barrage of revolutionary software on Windows 10.

Microsoft’s head, Satya Nadella, kicked off with a keynote speech streamed online and presented in front of live audience at Moscone Center in San Francisco.

The Indian-American CEO stressed: “Windows 10 is not just another release of Windows, it is a new generation of Windows.”

DESIblitz takes a look at all the exciting features that promise to deliver a universally compatible user interface across all Windows devices!

Microsoft cleared the cloud of mystery over its Project Spartan by unveiling its brand new web browser, Edge, replacing the iconic but tired Internet Explorer.

In an attempt to catch up with Google Chrome, Mozilla Firefox and Apple’s Safari, Edge supports Chrome and Firefox extensions and allows users to scribble notes on the screen with a stylus.

Also built into Edge is Cortana, a digital assistant that lets you voice-control different functions. Just like how Siri is to Apple users. Male and female voices are available to choose from. 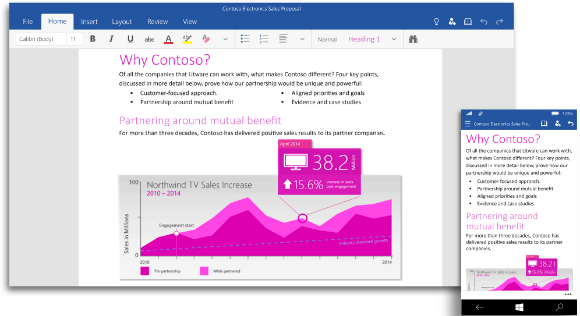 Office will become a standalone platform, capable of running alongside third party add-ons.

For example, the taxi app firm Uber can link with Outlook to automatically book a taxi when a meeting has been created.

A live demonstration shows how the new Office can accommodate the iPad as well.

These are bold and understandable upgrades, as Office is in stiff competition with the likes of Google Docs, which has taken the spotlight where Microsoft once had a monopoly on.

Continuum is a system that identifies a specific device and re-formats the app in use to optimally fit a secondary device – be it a smartphone, PC or Xbox One.

It also enables one device to act as a mouse or keyboard for another.

Joe Belfiore, Microsoft’s Vice President of Operating Systems, said: “We believe this enables the vision of the phone in your pocket with your data and apps being able to give you the full power of the PC experience.”

If Microsoft can create a universal operating system, it will take a significant edge in the market and send its rivals back to their research labs.

Another crucial announcement put to bed the big pre-conference ‘elephant in the room’ question of whether the Windows Store will integrate Android apps.

Nadella alluded to answering this issue when he said: “What you will hear us talk about in this conference is perhaps the broadest lens to which we view developers, development and platforms.”

In essence, the answer was ‘kind of’, as Windows 10 will allow access for Android and iOS developers to emulate their apps onto the Windows Store via clever coding.

While the open source approach is expected from Android, it is surprising the highly-protective iOS is happy to follow suit.

But the ease of getting Android and iOS apps onto the Windows Store will surely be closely monitored by fans.

The Windows Store currently has nowhere near as many apps as its competitors, so this ‘rather than beat them join them attitude’ must be a sigh of relief for Microsoft.

On the hardware front is an 84-inch, 4k display, wall mountable tablet, looking to replace the whiteboard.

Aimed mainly at businesses, the Surface Hub was first introduced in January 2015. Its price is yet to be disclosed.

The wireless headset designed to embrace augmented reality is perhaps the most impressive announcement at the conference.

Taking a step further from wearable watches, this impressive piece of kit projects holograms. This means users can interact with virtual reality robots that adapt to the user’s ‘real’ environment.

Still in prototype stage, it is difficult to tell whether HoloLens is just a gimmick or a glimpse into the future. Let’s hope it will not suffer the fate of Google Glass.

As the world’s biggest software company, Microsoft naturally has an ambitious target for Windows 10 – to reach 1 billion users within 3 years.

Given the full range of hardware devices Microsoft uniquely utilises, this goal is actually quite achievable.

Microsoft Build 2015 has stamped the company’s openness to establish working relationships with its competitors.

Not only will this bring about the long-awaited catch-up Microsoft desperately needs, it can even pave way for  to claim a dominant stake as a worthy brand and user interface.

For user of Windows 7 and above, Windows 10 will be a free upgrade for one year, starting from its yet-to-be-confirmed release date.

Bipin enjoys cinema, documentaries and current affairs. He writes silly rhyming poetry when free, loving the dynamics of being the only male in the household with his wife and two young daughters: “Start with the dream, not the barriers to fulfilling it.”
Call of Duty: Black Ops III Trailer Revealed
The ‘Fart Tracker’ can Improve your Diet