Not sure which footballers you should add to your FUT team? We break down the top 10 FIFA 18 player ratings to help you decide.

With FIFA 18 now released, there’s one important aspect every fan will want to know; the FIFA 18 player ratings.

Since the game’s release on 29th September 2017, players are keen to build up their squads with powerful footballers. Especially now that FUT Icons is now available for PlayStation 4, PC and Xbox One.

While EA Sports has released the Top 100 FIFA 18 Player Ratings, we’re sure many are very interested in the Top 10.

Influenced by the footballers’ performances over the last year, these FIFA 18 Player Ratings continually change over the series’ history.

Without further ado, let’s see which footballers have made it into the Top 10. Those who will help give you that all-important edge to your FUT squad! 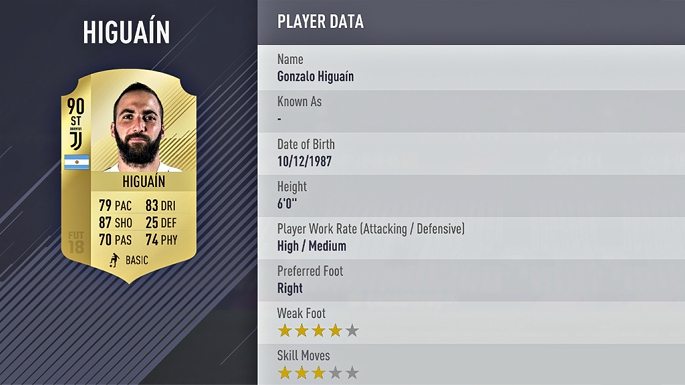 For the Serie A 2016/17 season, Gonzalo Higuaín transferred to Juventus FC where he witnessed significant achievement in his football career. Scoring 32 goals, he impressed many in the footballing world.

With this stellar performance, he has jumped several places in his rankings. From No. 19 in FIFA 17 to now No. 10, with an increased overall Striker score of 90.

While his Shooting remains at 87, both his scores in Dribbling and Passing have seen a rise to 83 and 70 respectively. 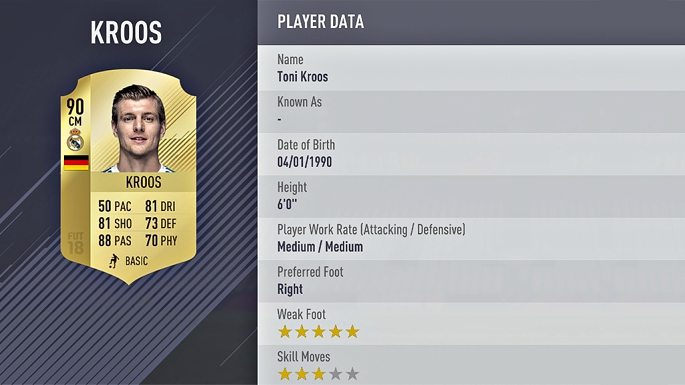 The Real Madrid midfielder stands as the best Passer amongst this Top 10 FIFA 18 Player Ratings, with an impressive score of 88!

In fact, Toni Kroos has made remarkable improvement across the different categories. Last year, FIFA 17 seen him on the list at No. 27.

For example, his Dribbling has risen to 81, Defence to 73 and Pace to 50. Overall, this reflects an excellent performance the footballer has made in real life.

If you’re looking for an all-around outstanding player for your squad, Toni Kroos is the ideal choice. 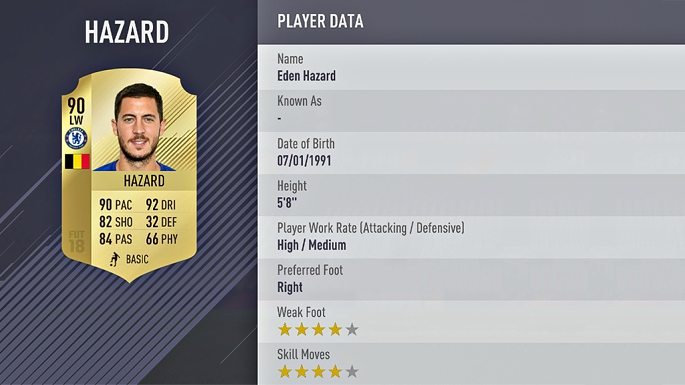 Another player to witness a flourishing rise in FIFA 18 Player Ratings; Eden Hazard jumped from No. 30 to No.8!

But this highlights his fantastic skills in the Premier League 2016/17 season. He ranks as the second top scorer for delivering 17 stong goals.

In the new game, his player card shows an overall improved Left Winger score of 90. In addition, with 92 Dribbling, 90 Pace and 84 Passing, no wonder he has now entered the prestigious Top 10. 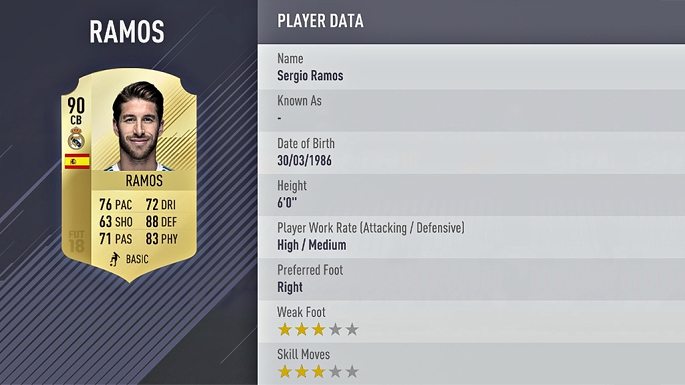 The Defender has witnessed his overall score improve from 89 to 90, leading him to earn the seventh place on this list.

Carrying an impressive score of 88 in Defence, very few can rival him in this category. He has also improved in Dribbling and Passing, landing 72 and 71 respectively.

After witnessing an outstanding La Liga 2016/17 season, which led to him scoring 10 goals, the Real Madrid captain is a potential top choice for your squad. 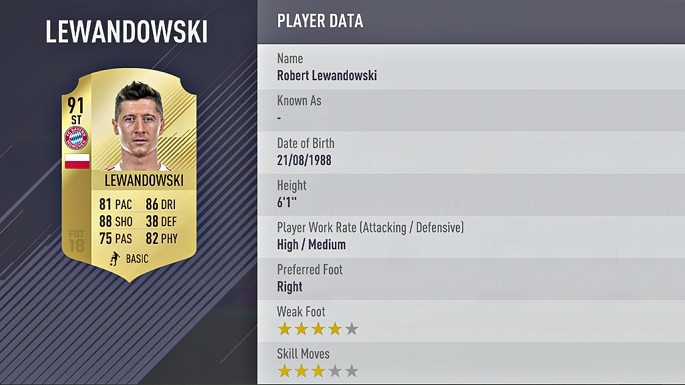 Ranked as No. 9 for FIFA 17, Robert Lewandowski edges closer up on the list this year. He now stands with a Striker score of 91, reflecting the improvements he made across the categories.

His Shooting has gone up to a magnificent 88, with Dribbling increasing to 86 and Passing to 75.

During the FC Bayern Munich 2016/17 season, the footballer achieved his 100th goal for Bayern Munich, playing against Eintracht Frankfurt. And in the 2017/18 season, he’s already earned 11 goals, making him the top scorer so far! 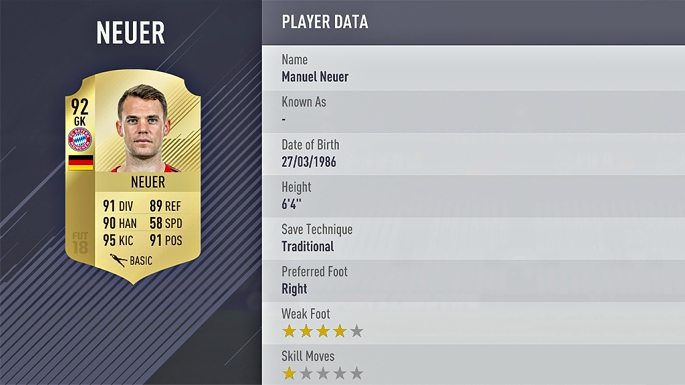 The only Goal Keeper to reach the Top 10 FIFA 18 Player Ratings; he’s a non-mover staying at the No. 5 spot.

While his overall score has risen to 92, he’s only witnessed an increased score of 91 for Diving. But he still carries an excellent performance, particularly with his 95 Kicking and 90 Handling.

One of the best Goal Keepers in the game by far, many fans should consider him for their squads. 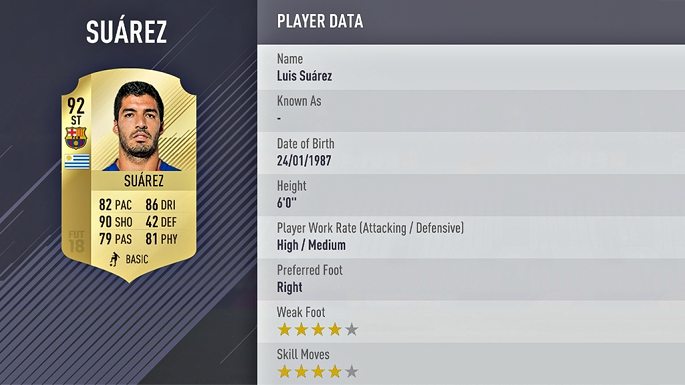 Luis Suárez also stays in the same position as No. 4, keeping his remarkable Striker score of 92. But he’s enjoyed a successful La Liga 2016/17 season, landing 37 goals.

This outstanding performance reflects in his player card. Still retaining a powerful 90 Scoring, he also carries a strong 86 Dribbling and increased 81 Physical.

For those looking for incredible Strikers to add in their squad, Luis Suárez offers brilliant ability that few can surpass. 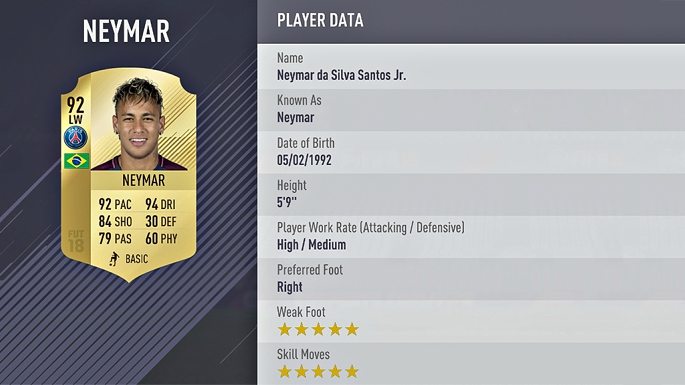 Neymar da Silva Santos Jr. stands again at No. 3, keeping his jaw-dropping score of 92 as a Left Winger.

Deemed as the most expensive player in the world, he holds spectacular scores in Pace and Dribbling. Landing 92 and 94 respectively.

A definite player to consider for your squad; we can’t wait to see Neymar one day potentially gracing the all-important top spot in the Player Ratings. 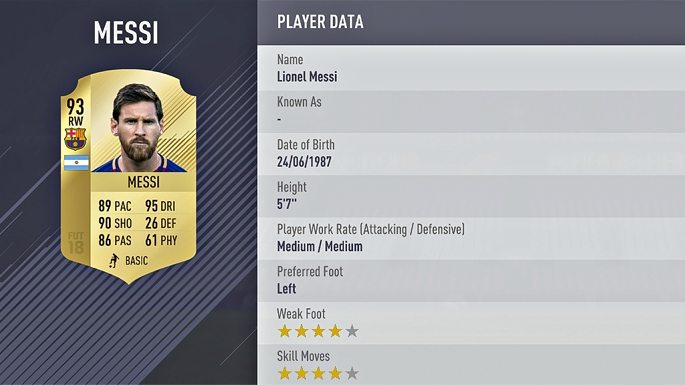 Lionel Messi stands in second place, unable to climb all the way to No. 1. But the FC Barcelona player hails as a must-have footballer for any FIFA 18 squad.

Across the board, he holds magnificent scores; highlights include a 95 Dribbling, 89 Pace and 90 Shooting.

A brilliant football player, both in real life and in the sports game, Lionel Messi stands tall with an overall Right Winger score of 93. 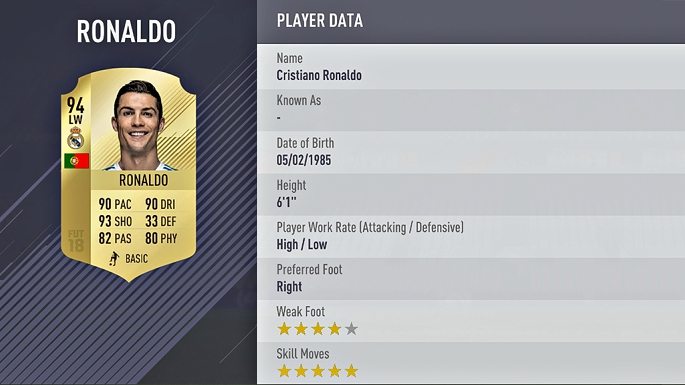 The Portuguese footballer has done it again; landing the No. 1 spot for the FIFA 18 Player Ratings! An impressive player that delivers in his performance and goals.

He carries an unmatchable Striker score of 94, along with 93 Shooting, 90 Pace and 90 Dribbling.

For many players, Ronaldo will surely be the top choice to add in their squad. With such a strong player card, and his amazing real-life career, no wonder he hails as a popular figure in modern football.

With these Top 10 FIFA 18 Player Ratings, fans will act quickly to create their dream football squad. Containing potentially many mentioned in this list.

The beautiful game look set to become just as popular and competitive as ever!

But if you’re also interested in how other footballers are ranked in this year’s title, why not check out the Top 100 on EA Sports to find out who made the staggering list.