England football manager Roy Hodgson has named a twenty-three man squad for the 2014 FIFA World Cup in Brazil. The squad comprises a nice mix of experience and youth, including players with strength and pace. Chelsea’s Ashley Cole has not been selected for the mega-event.

"We football people, we deal to some extent in dreams."

England football manager Roy Hodgson has unveiled his squad for the 2014 FIFA World Cup in Brazil.

Ten of the twenty-three players picked by Hodgson are under the age of twenty-five. The average age of the squad is twenty-six. Most of the squad was pretty much predicted, barring the exclusion of Ashley Cole.

Joe Hart one of the stand out players of the season will be backed by two other goalkeepers in the squad. 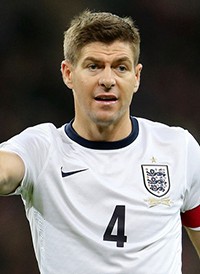 There are seven defenders, including Southampton teenager Luke Shaw. Steven Gerrard will lead the side and is joined by eight other players in the midfield, including the oldest player of the squad, Frank Lampard. Four strikers have been selected to make up the rest of the squad.

There are seven players on the standby list, including 1 goalkeeper, 2 defenders, 2 midfielders and 2 strikers.

There was no place for the experienced left-back Ashley Cole. Cole announced his retirement from International Football after being omitted from the squad.

The 33-year old won 107 caps, a record for a full back defender. Hodgson revealed leaving out Cole was one of the hardest decisions of his career. He said: “I can only be unbelievably grateful for the gracious way that he accepted the decision. And accepted that it was a choice I had to make.”

Football pundit and former Liverpool defender, Alan Hansen added: “I would have taken him but I can understand why Roy Hodgson hasn’t. I watched him play in the Champions League and against Liverpool and he was excellent but he hasn’t been playing a lot and that’s probably the reason why Roy hasn’t taken him.” 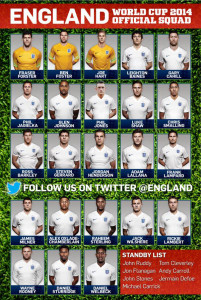 Many have predicted Barkley as the young Gazza, especially after the goal he scored against Manchester City in the Premier League.

This squad is a direct opposite to the last world cup, where England took quite a few old players who looked very tired on the pitch. With expectations low of the England squad this time round, a new approach had to be taken with some new fresh faces.

However, it remains to be seen if they will struggle defensively especially with the axing of Cole. Up front they have two potential stars in the making, with the inclusion of Liverpool’s Sterling and Daniel Sturridge.

There were mixed reactions from the DESI fans after hearing the news of the squad. Shaz said: “England won’t make it far, sorry to say but we need a stronger squad than that.”

Jatin was more positive as he said: “You’ll never find a balance that appeals to everybody, so lets support our country.”

The one thing that Roy Hodgson has got right is selecting players on merit and based on the form they have displayed during the 2013/2014 Premier League season.

Manchester City’s solid midfielder James Milner has been selected, despite not playing every match this season. Manchester United’s poor season is reflected in the final squad, with only four players being selected.

Some will say it is a brave decision to pick a young side, while others may feel Hodgson has taken a gamble. But looking ahead to the future it is a reasonable squad.

The England squad and standby list announced by Roy Hodgson is as follows:

The England boss has high hopes for the event as he believes the team will not only get through the group stages but come home with the trophy. Speaking of his dream he said:

“We football people, we deal to some extent in dreams. It would be foolish, I think, if you were too pragmatic, too bogged down by the realities of the situation.”

He continued: “You’ve got to, when you put your head on the pillow at night, imagine your team getting the greatest successes, playing very well and coming back to a hero’s welcome because otherwise it would become a very boring exercise.”

The biggest question on every one’s mind is whether the team can gel together and play as an organised unit. Fans and critics alike will be expecting the team to reach the quarter-finals at a minimum. If they went further that would certainly be a bonus at this stage.

There will be immense pressure on the players, especially if it comes down to the dreaded penalty shoot-out. We all know that England has a poor record when it goes to penalties. But as they say its a new tournament.

England will walk out in the Amazonia Arena for their first world cup match against Italy on 14 June, 2014.

Faisal has creative experience in the fusion of media and communication and research which increase awareness of global issues in post-conflict, emerging and democratic societies. His life motto is: "persevere, for success is near..."
Manchester City win Premier League Football 2013/2014
Footballer and Sports Therapist Saddiqa Shan