EA Sports have released the Official 2014 FIFA World Cup Brazil game. The game has creatively captured the spectacle of the global sporting event and is one that most football enthusiasts will enjoy to play.

"The graphics are good, the atmosphere before the games is amazing.”

The Official 2014 FIFA World Cup Brazil game was released by EA Sports during late April, 2014. The 2014 World Cup edition will surely get the football loving fans ready for the samba party.

The game was developed by EA Canada for several platforms including PlayStation 3, Xbox 360 and PC format. Gamers who have upgraded to the latest PlayStation 4 and Xbox One won’t be able to play the game as it will not be available on the two consoles. 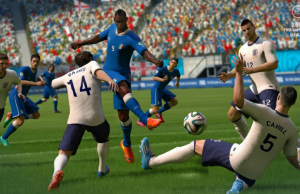 The gameplay and graphics have been updated from the previous FIFA World Cup editions. The added features and gameplay improvements are sure to be a hit worldwide and the experience will be unlike anything seen before in a FIFA World Cup title.

The soundtrack features thirty-four songs from artists all over the world including Australia, Canada, Israel, Mexico, USA and of course the host country Brazil. It also has the official World Cup 2014 song, We Are One (Ole Ola) by Pitbull featuring Jennifer Lopez.

Emerge yourself with ten brand new exclusive modes in authentic resilient stadiums that capture the passion, fun and excitement of the Samba crowd:

Road To The World Cup: Players can take control for any of the 203 FIFA sanctioned World Cup nation teams. You can guide your country from the qualifying rounds to lifting the trophy.

Captain Your Country:  Marks the return of one of the most popular FIFA game modes of all time. Make your way through qualifying and lead your team to the World Cup to lift the trophy. 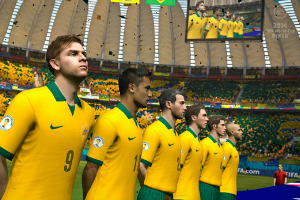 Road to Rio de Janeiro: New online mode game where players progress through a map of  all the host cities and their authentic stadiums. Players can lead their team to the final at the Estádio do Maracanã stadium in Rio de Janeiro.

Online FIFA World Cup: You have to get out of the group stage and win four games in a row to be crowned World Champions.

Story of Qualifying: Takes you back to the qualifiers and gives you sixteen real life scenarios that the world witnessed. Can you recreate history?

Story of Finals: This game mode is activated at the beginning and regularly updated and the player is set challenges on daily events.

Alongside the above, other modes include: kick off, skill games, online friendlies and EA Sports football club.

Appealing to a new audience, lead producer of the game Matt Prior, said: “If you’ve never played FIFA before, this is definitely the product to get on board.”

EA Sports 2014 FIFA World Cup Brazil video game has also exciting features. Some of these are:

Response Dribbling and Pinpoint Passing: Response Dribbling allows players on the pitch to turn quickly at every possible angle and still maintain to control the ball. Additionally there is new flicks, dribbles and a Brazilian-inspired skill move.

Set Piece Tactics: This allows direct teammates to make runs to the near or far post and to the edge of the box or penalty area. The defenders will react accordingly to help protect open spaces and the goal keeper will direct who to mark. 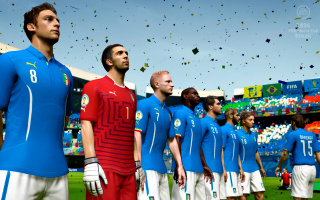 Over-the-Back Headers: This is where tall Defenders and Attackers are able to clear the ball or improve their chances of scoring. Winning the air battle will be even more important than ever before.

New Penalty Kicks: Penalties during a match will now feature players lined-up along the edge of the box ready to react if the shot is missed. Keepers can use antics to distract the penalty taker.

Adidas Ball Physics: By using data collected by adidas’ Innovation Lab in Herzogenaurach, Germany, the Brazuca and other balls included in the game react as they would in the real world.

In actual game mode every match starts with a moving aerial view of the stadium, before zooming in on the pitch as the players walk out of the tunnel.

The traditional giants of the game, England and Italy, have their national anthems played before every match adding that extra touch.

There is also the bonus that once you actually get to Brazil, there will be cutaways to fans back home after goals. Score a goal with England, and the video will cut to fans cheering in Trafalgar Square.

Their has been mixed reviews for the 2014 FIFA World Cup Brazil game as one critic said on Games Radar:

“I was planning on boycotting this game because it was not on PS4. I’ve anticipated every release of EA FIFA games since 2003. Not this time, as I decided that I should give EA a chance. The presentation is awesome, but that’s about it. The problem with this game is that it’s no fun.”

A more positive reviewer wrote on Metacritic: “This game is so amazing I just can’t understand why some people don’t like it. The graphics are good, the atmosphere before the games is amazing.”

As with all games you will have the lovers and the haters. However the 2014 FIFA World Cup Brazil game will surely get the nation into the mood for the biggest football event of 2014. Who are you cheering on!

Sid is a passionate about Sports, Music and TV. He eats, lives and breathes football. He loves spending time with his family which include 3 boys. His motto is "Follow your heart and live the dream."
The Falling Popularity of Facebook
The Internet of Things ~ Changing the Future