Hosts, Brazil have prepared twelve state of the art venues, including Green stadiums for the 2014 FIFA World Cup. The Estadio do Marcana in Rio De Janeiro will stage yet another final showpiece on 13 July, 2014

"I think the Estadio Nacional is what the capital deserves"

After years of hard work, twelve state of the art stadiums have been prepared for the 2014 FIFA World Cup in Brazil. Seven new stadiums have been built, with ecological and sustainable features, ensuring the mega football event will be a successful one.

Historic venues have been extensively renovated, including the Estadio do Marcana, which stands ready to stage the final showdown.

Here’s a preview of the twelve stadiums for the tournament: 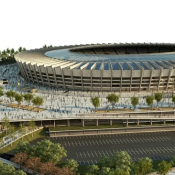 The Mineirão is one of Brazil’s largest Stadiums, with a capacity of 62,160. This venue was opened in 1965 and is home of three time national champions, Cruzeiro EC.

This newly modernised stadium will host six games for the tournament, including a last 16 game and one semi-final. The Group D game between Costa Rica and England will also be played here. 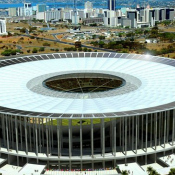 Estadio Nacional Mané Garrincha has been virtually demolished to make way for an upgraded version in 2013. The pitch has been lowered and new stands have been installed.

The stadium holds a capacity of 72,788, making it the second largest stadium in Brazil. The venue will host seven games, including a quarter-final match. Cameroon against Brazil is one of the highlight games at this stadium.

Speaking about the venue, FIFA Secretary General, Jerome Valcke said: “I think the Estadio Nacional is what the capital deserves, a beautiful stadium, which is above a number of European stadiums in the world.” 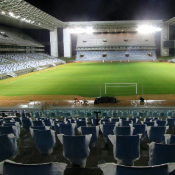 Freshly constructed for the 2014 FIFA World Cup, Arena Pantanal is a nice looking stadium, particularly in the evening.

The venue is ECO friendly as it has been built with an emphasis on recycled material, soil and air quality.

The stadium has a capacity 43,500 and will host four group games. 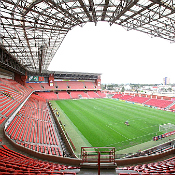 Historically constructed in 1914, Arena da Baixada is the home of Clube Atlético Paranaense. It was refurbished in 1999 and has since been among Brazil’s most contemporary stadiums.

The stadium has been upgraded further for Brazil 2014, as it will stage four group matches. African giants Nigeria will play here against Iran. This is quite a small stadium with a capacity of 41,456. 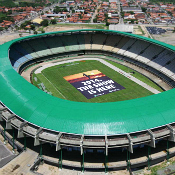 Opened in 1972, the Estadio Castelao is home to Fortaleza EC and Ceara SC. Renovated for Brazil 2014, the venue now has a massive capacity of 63,903.

A newly high-tech white roof is able to reduce heat and cover every tier. The stadium will host Brazil’s second group game, plus three more group matches and two knock out ties. 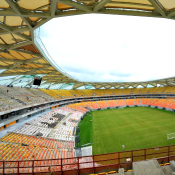 Situated near to the Amazon rainforest, the temperature at the Arena Amazonia will be hot and humid. The venue was refurbished in 2013 and has a capacity of 42,374.

The stadium is made up of a metal structure, which resembles a straw basket – a product famous to this region. Four group games will be played at this venue, including England’s opening Group D match against Italy. 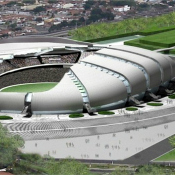 Estadio das Dunas is a brand new venue, replacing the old and demolished Estádio João Machado. Opened in 2013, the stadium has a capacity of 42,086.

The stadium has been named after and inspired by large sand dunes – A feature famous in the Natal region. The venue will host four group matches of the tournament. 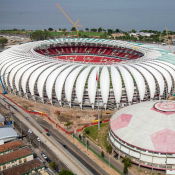 Constructed in 1969, the Estadio Beira-Rio is located in the south of Brazil on the banks of the Guaiba River.

The venue is home to SC Internacional and can hold 48,849 fans inside the stadium. The venue will host five matches, including a round 16 game. 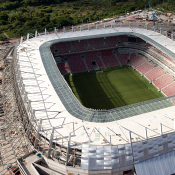 Opened in 2013, this is a newly constructed stadium located in the suburbs of Recife. The venue will host five matches at Brazil 2014.

The USA versus Germany game should be a cracking game at this stadium.

It has a capacity of 44,248 and is the home ground for Clube Náutico Capibaribe. 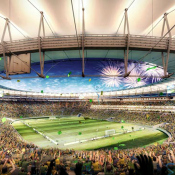 Constructed in 1950 for the fourth world Cup, the Estadio do Marcana is home to CR Flamengo and Fluminese FC.

The venue has been renovated in such a way that its heritage was retained.

Describing one of the sustainability measures introduced at the venue, Manager, Julia Martins said:

“50% of the rainwater that is captured by the cover is used in the bathrooms and for the irrigation of the pitch. With this we have managed to reduce water consumption by up to 30%.”

This is the largest football stadium in Brazil, with a seating capacity of 78,800. The venue will host seven matches in total, including a round 16 tie, a quarter-final and the grand final. 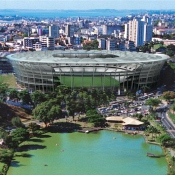 The modern Arena Fonte Nova has preserved the materials and design features of its former, Estadio Octávio  Mangabeira. The venue has a capacity of 55,00 and is home to EC Bahia and EC Vitoria.

The stadium will host six games at Brazil 2014, including a round 16 match and a quarter-final. This venue will host potentially epic group games with Spain taking on Netherlands and Germany playing Portugal. 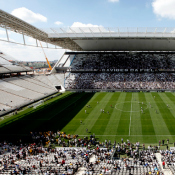 The Arena de Sau Paulo was completed in 2013 and post tournament will be the new home of SC Corinthians Paulista.

This brand new venue will host six matches, including the opening game of Brazil 2014, a round 16 tie and a semi-final.

The stadium will have a capacity of approximately 65,807.

All the stadiums are expected to be ready and handed over to governing body, FIFA before 12 June, 2014.

Faisal has creative experience in the fusion of media and communication and research which increase awareness of global issues in post-conflict, emerging and democratic societies. His life motto is: "persevere, for success is near..."
Pakistan produces FIFA World Cup Brazuca ball
FIFA World Cup 2014 Fantasy XI Poll