A Guide to the Stadiums for the 2022 FIFA World Cup

With the 2022 FIFA World Cup in Qatar just around the corner, we preview the stadiums poised to host the matches.

Sustainability was a priority in development

After many years, eight stadiums have been prepared for the 2022 FIFA World Cup in Qatar.

While several new stadiums have been built in time for the tournament, iconic venues such as the Khalifa International Stadium have been renovated.

This World Cup is a historic one as it will be the first tournament ever to be held in the Arab world.

The tournament is also the first not to be held in May, June or July due to Qatar’s intense summer heat. It begins on November 20 and concludes on December 18, 2022.

In addition, it will be the last tournament to involve 32 teams, with an increase to 48 teams scheduled for the 2026 tournament.

With the likes of France, Brazil, England and Germany among the 32 sides competing for glory, expect the stadiums to play host to some exciting matches.

We preview the eight stadiums that are hosting the World Cup matches. 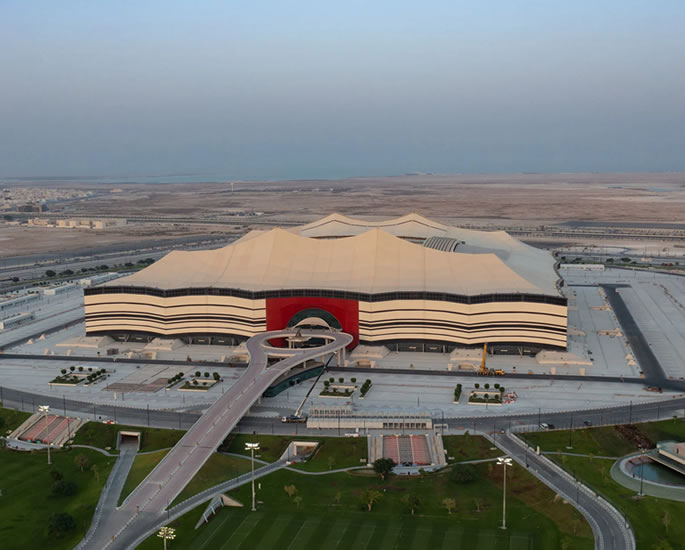 Al Bayt Stadium will host the opening match of the 2022 World Cup between Qatar and Ecuador and this has been determined since its first sketch.

Qatar turned to the rich fabric of its culture to welcome the world, inviting guests to enjoy the traditional comfort custom that has been in the region for centuries.

Traditionally, the tents are identified by black and white stripes. This is reflected on the stadium’s exterior, as are the vibrant sadu patterns that welcome fans.

Sustainability was a priority in development and the upper tier was designed to be removed after the tournament, allowing the decommissioning of seats.

Environmental practices reach the surrounding city of Al Khor where the parks, lakes and protected greenbelt land stretch out from the stadium to the sea, ensuring a lasting legacy. 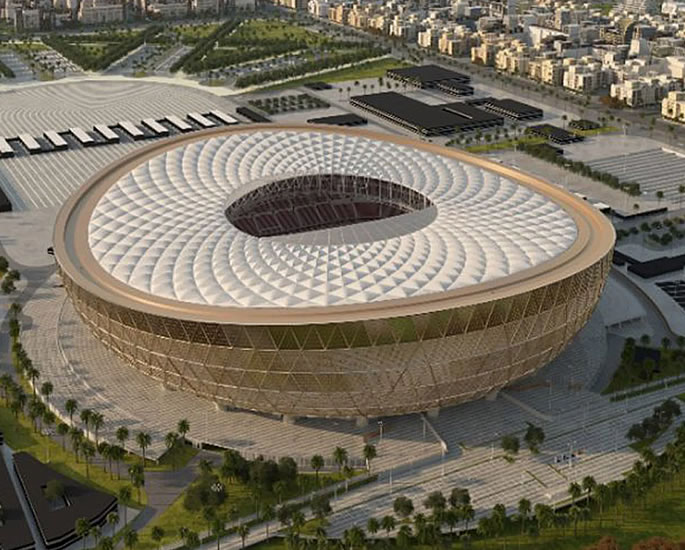 Lusail Stadium has the honour of hosting the World Cup final.

The scale and splendour of this stadium are built to lie in harmony with its surroundings.

Its design is inspired by the handcrafted bowls found across the Arab and Islamic world. Meanwhile, the glimpses of light reflect the region’s fanar lanterns.

Over time, the golden exterior will fade, replicating aged metal handicrafts to create a venue alive with cultural character.

After the World Cup, Lusail Stadium will be transformed into a community space of schools, shops, cafés, sporting facilities and health clinics. 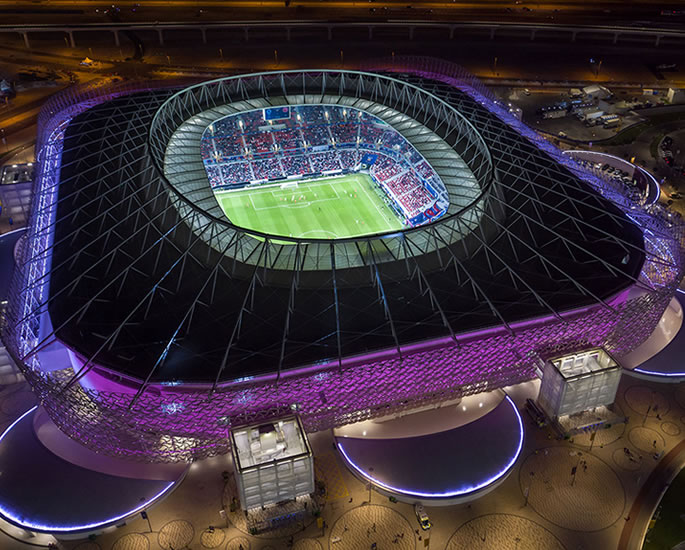 Ahmad Bin Ali Stadium is located in Umm Al Afaei, one of Qatar’s most historic cities.

It will become the home stadium of Al Rayyan SC once the tournament finishes.

The stadium’s design and the surrounding buildings mirror aspects of the local culture and traditions.

The intricate exterior is designed to reflect sand dunes while the geometric patterns showcase the beauty of the desert, native flora and fauna, as well as local and international trade.

Over 80% of the construction material came from the original stadium that previously occupied the site while existing trees were carefully retained.

When fans visit the stadium, they will be able to travel via an all-new Doha Metro system, making for an environmentally friendly venue experience. 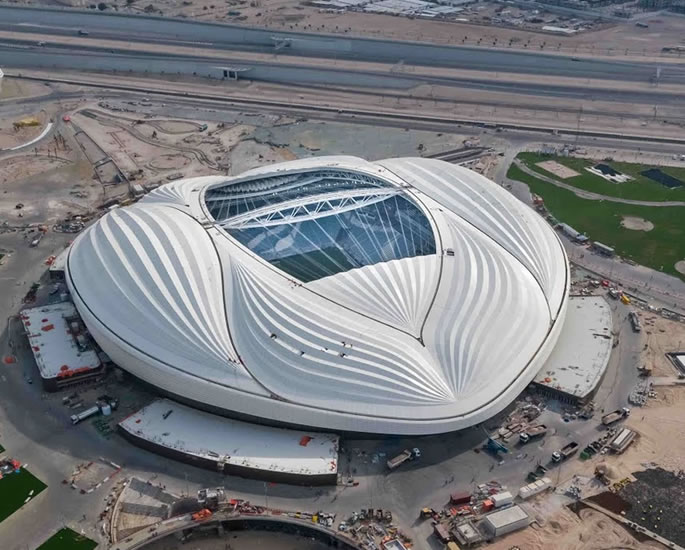 Al Janoub Stadium is located in Al Wakrah, which is a city rich in history but is looking to football for the future.

The stadium’s innovative design is inspired by the wind-filled sails of Qatar’s traditional dhow boats, paying tribute to Al Wakrah’s fishing and pearl diving past.

For centuries these beautiful crafts have sailed through Gulf waters and far beyond, returning laden with the sea’s bounty.

After the World Cup concludes, the stadium capacity will be reduced, with seats donated to other global sporting projects.

This will also guarantee an electric atmosphere for Al Wakrah SC matches.

Al Janoub Stadium is surrounded by luscious parkland featuring sports and leisure facilities, benefitting the community for years to come. 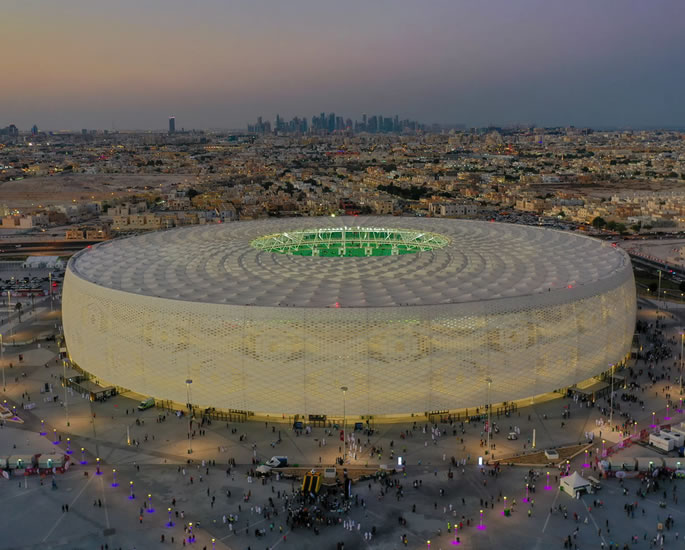 Its circular appearance is inspired by the gahfiya, which is the traditional woven cap worn by men and boys across the Arab world.

The gahfiya symbolises the coming of age for youth.

As Qatar prepares to welcome the 2022 World Cup, it is a fitting inspiration for this unique stadium.

For many fans, their first glimpse of the stadium may come from above as many international flights descend over the venue.

The white exterior stands out among its green surroundings.

Al Thumama Stadium brings a vision beyond its inspiration and purpose, marking a coming of age for football. 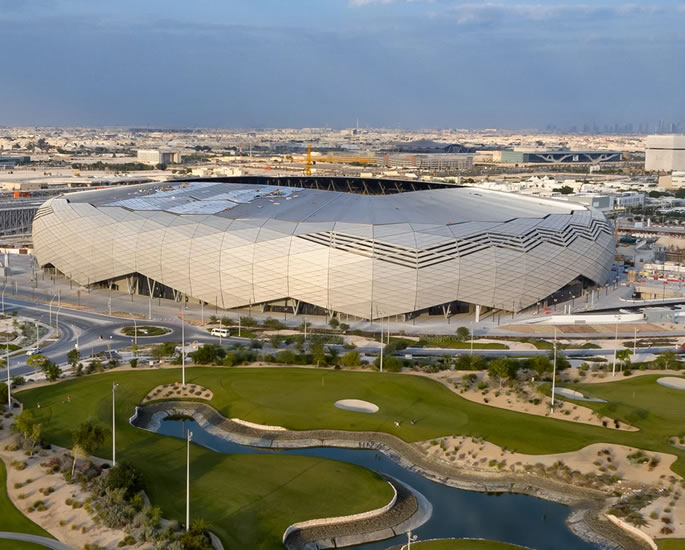 It puts a light on Qatar’s position as a dynamic learning hub.

Its namesake location, Education City, is a vibrant centre of learning and knowledge. The arena is empowered by its neighbouring universities whose corridors are filled with new ideas and stories of state-of-the-art research, expressing talent and innovation.

The exterior features triangles which create diamond-like geometrical patterns that sparkle as the sun moves across the sky.

At night, a digital light illuminates the stadium, providing a surprise for fans.

Following the World Cup, more facilities will be added to the campus, keeping locals fit for the future. 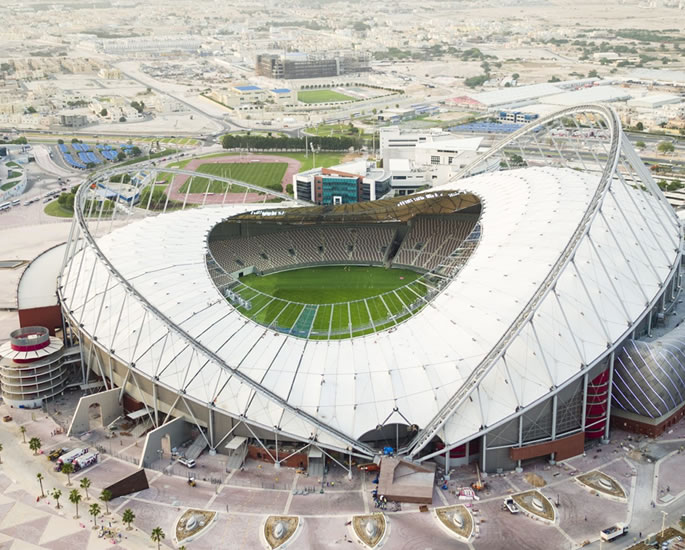 Khalifa International Stadium is an iconic venue in Qatar, with many football matches and athletic events taking place since opening in 1976.

The highlight has always been the dual arches but they now feature a wide canopy stretched out below them.

This complements the stadium’s cooling system to maintain a comfortable temperature for players and fans.

The new tier added 12,000 seats, while digital lighting and a modern exterior brought new life to a long-standing stadium.

Having previously staged the Arabian Gulf Cup, the FIFA Club World Cup and IAAF World Athletics Championships, this venue is ready to excite the world as the World Cup. 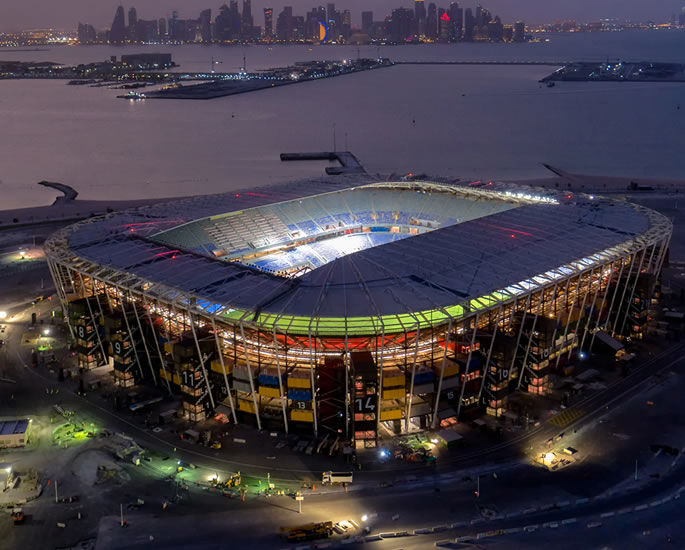 Even before hosting its first match between Mexico and Poland, Stadium 974 made history.

Made entirely out of shipping containers and modular steel, it is the first fully demountable covered football stadium, highlighting Qatar’s commitment to cost-effective sustainability and daring design.

Not only is 974 the international dialling code for Qatar, but it is also the exact number of shipping containers used in the stadium’s construction.

Located in the portside area and in sight of Doha’s coastal cityscape, fans at the venue will feel the cool breeze coming from the Arabian Gulf.

After the World Cup, the containers and stadium will be reused.

A waterfront development featuring facilities for the local community will come to life, as well as a dynamic hub for business.

This new concept means that while Stadium 974’s physical presence may be temporary, its legacy will be everlasting.

These eight stadiums have been designed with Qatar’s traditions in mind, all while showcasing them with modern architecture.

As the 2022 FIFA World Cup draws closer, expect roaring atmospheres as the world’s best national teams give it their all at the football spectacle.

Dhiren is a journalism graduate with a passion for gaming, watching films and sports. He also enjoys cooking from time to time. His motto is to “Live life one day at a time.”
Indian Men & Women International Cricketers to get Equal Pay
Wasim Akram reveals Cocaine Addiction after Retiring