Iulia Vantur attends Wedding with Salman Khan in a Saree

Iulia Vantur posted a photo on Instagram of her looking lush in a delightful saree whilst attending a glamorous wedding with Salman Khan.

"There is nothing more feminine and beautiful than a saree."

Iulia Vantur the mystery lady, or ‘girlfriend’ of Salman Khan as some know her, was in Udaipur, India, at a wedding with him.

The wedding which took place in Jag Mandir was of Varun, the son of Binod Chaudhry a Nepalese businessman, and Anushree, the daughter of jeweller Raj Kumar Toynga.

Ms Vantur posted a photo of herself on Instagram wearing the pistachio coloured green saree. Saying: “There is nothing more feminine and beautiful than a saree.”

The saree with gorgeous embroidery at the bottom and on the blouse made Iulia look a million dollars. 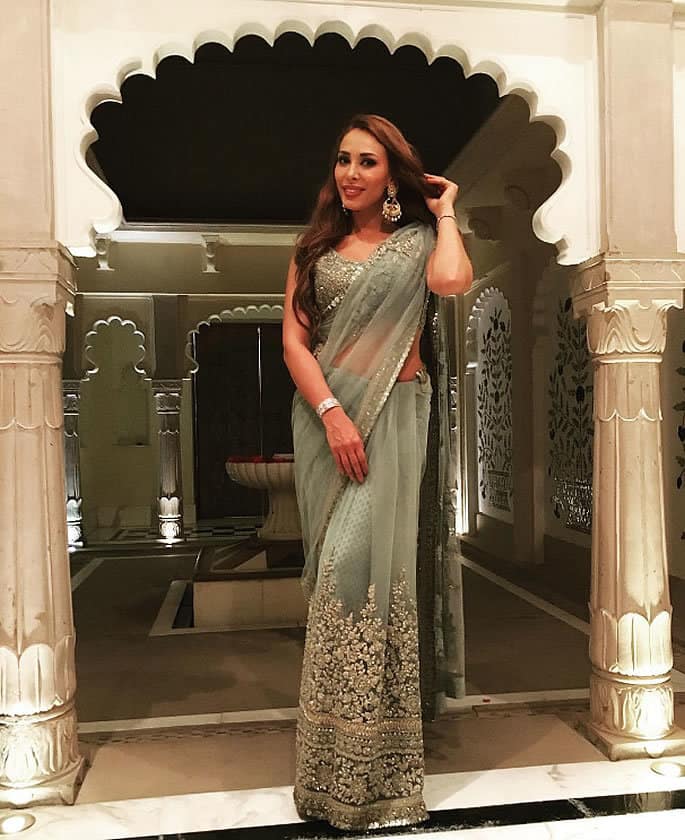 The wedding celebrations started on Friday night and went on into Saturday. A huge mix of celebrities and the royals of Rajasthan attended the grand social affair.

Salman appeared in a black suit attending the wedding for a few minutes. He was heavily guarded by bodyguards and police to protect him from frenzied guests who were roused by his presence in a fan-like state.

He met the bride and groom prior to the start of the marriage ceremony itself.

Boats designed like Kashmiri shikaaras were used to transport guests from the neighbouring top hotels to the wedding venue.

The venue itself which is an island was extravagantly decorated with drapes, stunning flowers and impeccable organisation to ensure all guests were treated in the best possible way.

Food at the wedding was a highlight too, provided by celebrity chef Ritu Dalmia, who gave guests a tremendous selection of vegetarian dishes accompanied by a beautiful fruit station.

With Iulia Vantur being seen at such venues with Salman Khan and her dressing up for him or the occasion, it is evident that their relationship, no matter how secret, is definitely one that is creating a buzz. And the more we see of her with him, the more we wonder, is marriage a possibility for them too?