Has Brexit sparked a Rise in Racism in the UK?

An increase in racially-motivated incidents since Brexit has many concerned about the rise of the extreme right. DESIblitz asks: Is racism here to stay?

“All of a sudden a small group of extremists feel empowered"

Amidst the economic uncertainty that has plagued Britain in the wake of the Brexit debacle, there has been a significant rise in racially motivated incidents across the country.

Men and women from both British and EU backgrounds have fallen victim to racially motivated aggression, abuse and violence perpetrated by an increasingly visible extreme rightwing population.

People are left wondering what has triggered this and how to challenge these cases of abuse in a safe way.

It’s no secret to non-white Britons that racism and xenophobia has been a problem even before the country’s exposure to the Brexit campaign.

Racism monitoring group, Tell MAMA, reported that public anti-Islam abuse and attacks alone had risen by 326% in 2015, with growing promotion of anti-Islam propaganda being posted on social media.

The outcome of the referendum has painted an even bleaker picture for Britons from South Asian, Afro-Caribbean and European backgrounds, as the high profile of the Leave campaign seems to have encouraged a higher public profile for the views of extreme right supporters.

Targets for this abuse are often British born citizens. And even after explaining that they were born in the UK, were often met with comments about their skin colour and the way they dress.

BBC News presenter Sima Kotecha was victim of racial abuse in her hometown of Basingstoke, when she was called a ‘p***’, a term she had not heard in the area since the 1980s. 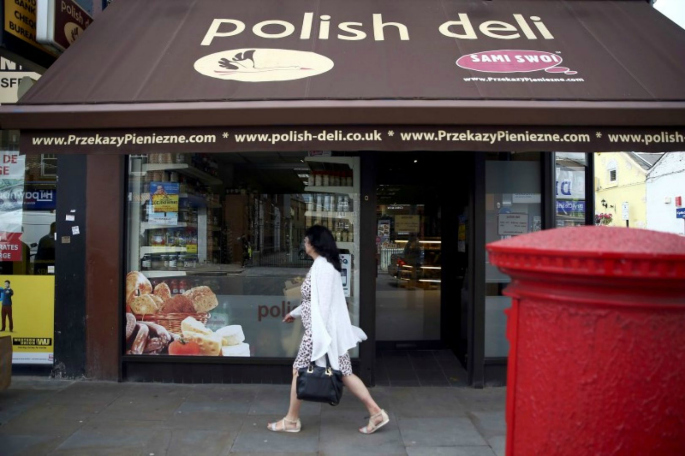 Britain’s Polish community have born a significant portion of the abuse, with a Polish community centre in West London vandalised with graffiti, and cards reading, ‘No more Polish vermin’, being posted through letterboxes.

Joanna Ciechanowska, director of the Polish Social and Cultural Centre said of the hate campaign:

“All of a sudden a small group of extremists feel empowered. The margins of society feel that they can do it because they think they have the support of half of the nation.

“It’s sad because living here for so many years…I have never actually encountered any racism in this country, and this is the first time it happened straight in my face.”

While intimidation, jeering and verbal abuse have been rife, there have also been several instances of serious violence.

Bashir Hussain, who works at Walsall based Halal butchers Kashmir Meat and Poultry, was attacked when someone threw a lit bottle of accelerant at him. The shop suffered significant fire damage, but Hussain thankfully wasn’t seriously injured. 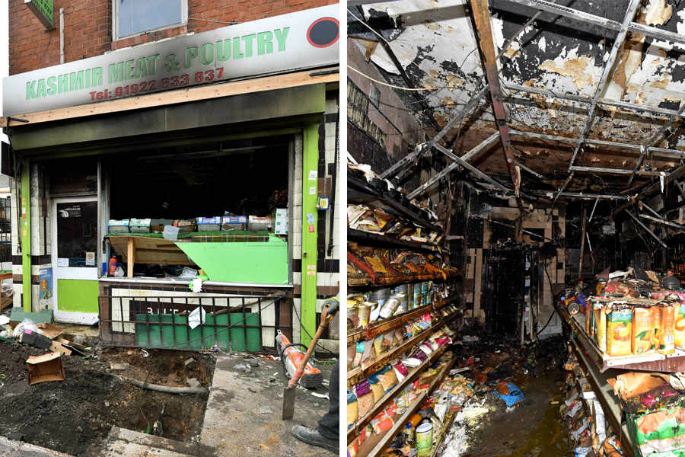 Sadly the same cannot be said for a number of other cases. In East London, two Polish men were physically assaulted, and had been left unconscious in the street for over an hour before getting medical assistance.

The legitimisation of the extreme right

With Brexit’s international profile, it is easy to see how many would latch onto the Leave campaign’s victory as a source of authority that validates anti-social behaviour. And certainly the behaviour of campaigners like Boris Johnson and Nigel Farage has contributed to this.

The demonisation of immigration has been the parlour trick of right wing media since the dawn of the industrial era, not as the valid concern of educated social scientists, but as an aggressive ideological diversion tactic.

People have already pointed to the similarities between Leave’s omnipresent campaign poster and the right wing propaganda used by the Nazi party in the 1930s.

Right wing newspaper campaigns from The Sun and the Daily Mail have exaggerated statistical data, and even deliberately misled facts for their own political goals.

Misappropriation of quotes, most recently with Labour leader Jeremy Corbyn’s stance on Islamophobia and anti-semitism, have been rife in print media for centuries. But in some cases, outlets have been found guilty of outright lying.

On more than one occasion, newspapers have been forced to print a retraction, getting away with a meagre, minuscule columns silently apologising along the path of least effort. 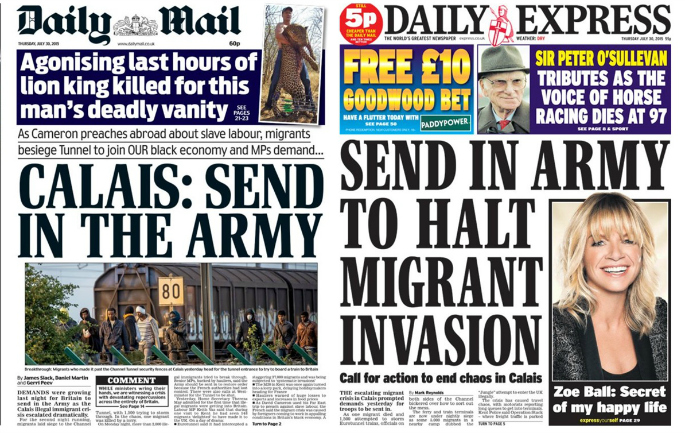 The way in which the media conducts itself is a serious problem when you consider how significant its influence is on the general public. The Sun sells over two million copies a day, and until recently was the biggest outlet in the UK.

Many critics will scoff at the idea that the dangerous anti-immigration rhetoric of these outlets meaningfully informs the views of millions. But often they are approaching the subject from the privilege of an academic background.

State school education in the UK has an embarrassing absence of political and real world curriculum, meaning that many students will leave school having never learned about what the European Union is, or even how basic economic structures work.

A significant proportion of the UK’s population rely on newspapers and websites as their sole source of information on the international sphere. While some will read more than one tabloid or broadsheet, the presence of a single right-wing voice across multiple outlets severely limits the kind of information they have access to.

So, when a deprived area, often with high levels of unemployment (and the UK is host to 9 out of the 10 poorest regions in North West Europe) is told by the press that migrant workers are taking 98% of all new jobs, but denied access to the context behind that statistic, this initial information is going to shape their worldview.

When outlets are making their corrections almost invisible, bad information is taken as gospel, regardless of its legitimacy.

But in spite of the irresponsible manner in which the right wing press conducts itself, it is not solely responsible for the spike in racially motivated incidents this past week.

The political sphere, while currently a hornet’s nest of liars, cheats and thieves, still remains a source of stable authority for many, and those harbouring extreme anti-immigration sentiments look to Johnson, Gove and Farage as idols.

When, in response to the infamous filmed Manchester tram incident earlier this week, Farage said: “I’d say to them that if they had those feelings those feelings should not be as strong this week.”

This could easily be taken as a legitimisation of the perpetrators behaviour.

That Farage went on to condemn the abuse becomes a moot point as his initial statement take centre stage. The public face of Leave’s extreme right not out and out condemning abuse sends a powerful message to a minority group that already have a narrow field of vision when it comes to the reality of modern Britain.

Herein lies the great public face of Brexit’s deluded minority. The people who voted Leave on the mandate that independence from the Union would allow Britain to expel its entire migrant population, did so based on print-media’s right wing skew, and the empty promises of cheap men in expensive suits.

Edmund Burke famously said: “The only thing necessary for the triumph of evil is for good men to do nothing,” and never has this quote felt more appropriate.

How to combat racist abuse

There is a silver lining to this rise in attacks. Video footage of the racial abuse on a tram in Manchester has lead to the arrest of the three men shown in the footage. It is extremely important that people know that racial abuse is a crime.

In London, Mayor Sadiq Khan has instructed the Metropolitan to stay on high alert for these racially motivated incidents. 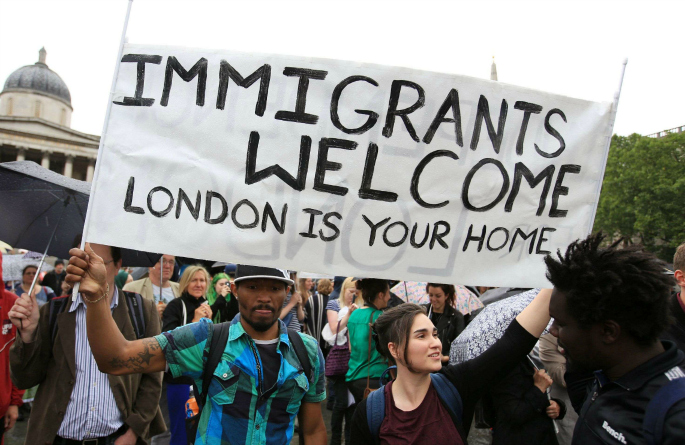 Home Office minister Karen Bradley has also announced that resources will be allocated to help tackle xenophobia, by boosting the number of offences that are reported, and by providing security for vulnerable institutions.

And while underhanded opportunists like Farage have avoided speaking out on these abuses, former Prime Minister David Cameron made it perfectly clear that racism has no home in Britain:

“In the past few days we have seen despicable graffiti daubed on a Polish community centre, we’ve seen verbal abuse hurled against individuals because they are members of ethnic minorities.

“Let’s remember these people have come here and made a wonderful contribution to our country. We will not stand for hate crime or these kinds of attacks, they must be stamped out.”

Alongside governmental support, Brits are urged to help protect vulnerable people so long as it is safe to do so. While many instigators will back down if challenged by others, there is still a risk that they might get violent.

Recording incidents will help provide evidence for prosecution, and you can report racially motivated incidents and hate crimes on the True Vision website (more information can be found here).

Above all else, it is important to remember that the outcome of Brexit impacts people from every walk of life.

Now more than ever it is paramount that people look out for one another and make it clear that racism and xenophobia are not respectable traits. Abuse will not be tolerated, and whether we stay or leave the EU for good, Britain is a country that anyone can call home.