7 Sexy Looks of Pooja Hegde you Need to See

Pooja Hegde is a rising Indian actress, with many praising her on social media for her sexy looks. Let’s take a look at some of the best.

Actress Pooja Hegde has become well-known for her work in Indian cinema; appearing in both Hindi and Telugu films. But she’s also famous for sharing sexy, glamorous looks on social media.

However, her career first began in modelling, specifically beauty pageants. Hailing from Mumbai, her beauty won the hearts of many.

In 2010, she became the runner-up of Miss Universe India competition. But soon, the budding starlet turned her attention to acting.

Her debut came in 2012, where she starred in Tamil film Mugamodi. A superhero film, she starred as the bubbly female lead Shakthi, which led to a nomination in Best Tamil Female Debut Actress category in 2013.

Fast forward a few years later, Pooja entered into Bollywood by starring in Mohenjo Daro (2016). Starring opposite Hrithik Roshan, this debut earned her many more fans and sparked a loyal fanbase.

Now, let’s take a glance through at some of the rising actress’ sexiest looks. 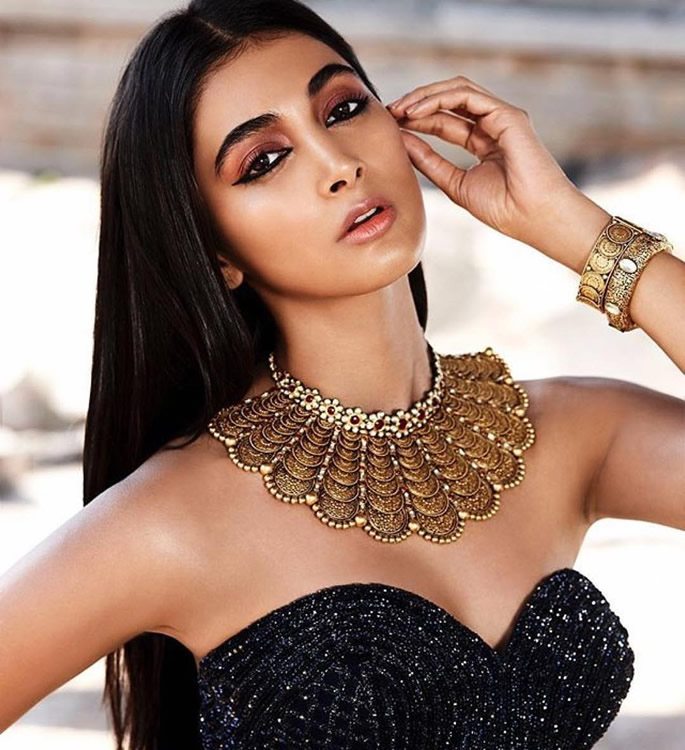 First, let’s take a look at this racy image, a photo shoot for Hello! India back in December 2006. Adorned with bejewelled accessories, Pooja appears as a captivating siren.

She wears a black, sleeveless bodice, containing dazzling sparkles. With a low V-neck line, it leaves room for the star to don an incredible choker necklace. Decorated with golden flowers and regal patterns, it stands out as the highlight piece.

Pooja also adds gorgeous bracelets on her wrists. She styled her hair in a sleek, straight do. For makeup, she takes some Ancient Egyptian inspiration, by wearing warm, brown eyeshadow with heavy eyeliner on her bottom eyelid, creating a winged effect. 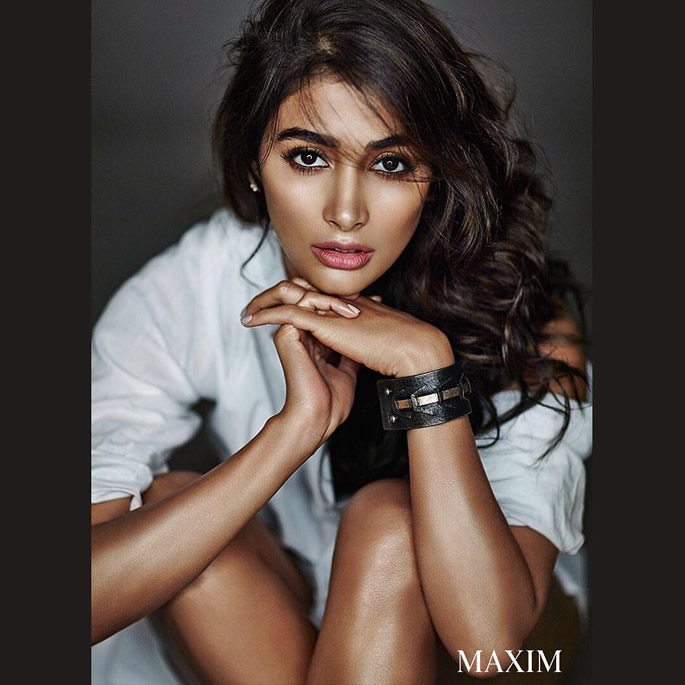 In March 2017, Pooja raised the temperature by appearing in a phenomenal photo shoot for Maxim. Take this gorgeous image for example, where she lounges on the ground. Yet gazes intently at the camera.

She wears an oversized, white shirt, with one shoulder fallen to one side. She wears a thick, brown bracelet, along with sparkling stud earrings. But we love her sultry pose in this image. Her chin resting on top of her hands, she cuts a flawless pose.

With her beautiful hair volumised into big curls, Pooja looks utterly radiant in this photo shoot. 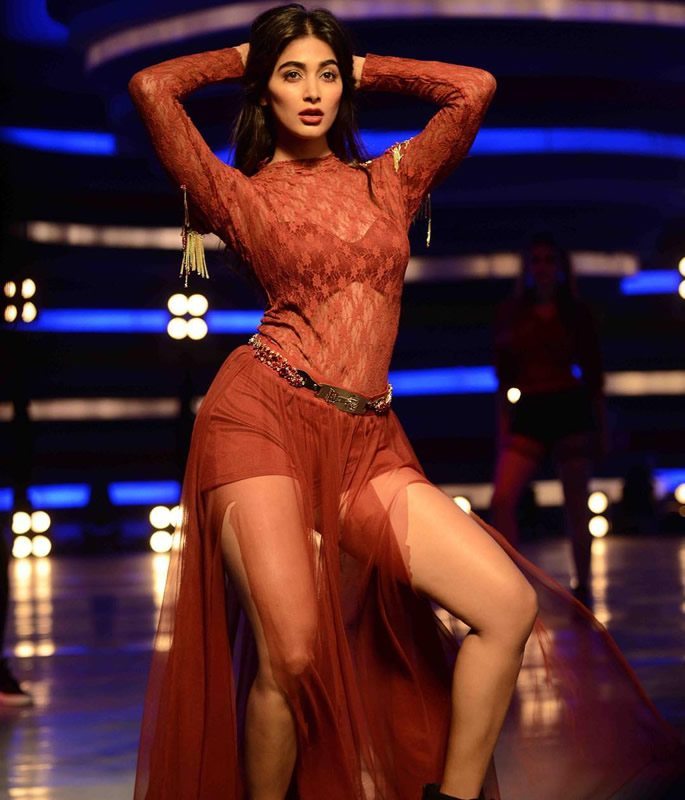 Pooja wore this sultry look when she appeared in DJ Duvvada Jagannadham’s ‘Seeti Maar’ music video. In the midst of dancing a sexy routine, the star dons this impressive, red outfit. She matches a lacy top with a pair of shorts, covered with layers of cascading red tulle.

With this gorgeous creation, the actress gives fans a glimpse of her strapless, red bra.  For accessories, she adds a dazzling brown belt, complimenting her warm, vibrant look.

We particularly love Pooja’s makeup in this sexy image. Accentuating her killer cheekbones with contouring, the actress delivers a sexy pout with a daring red lip. 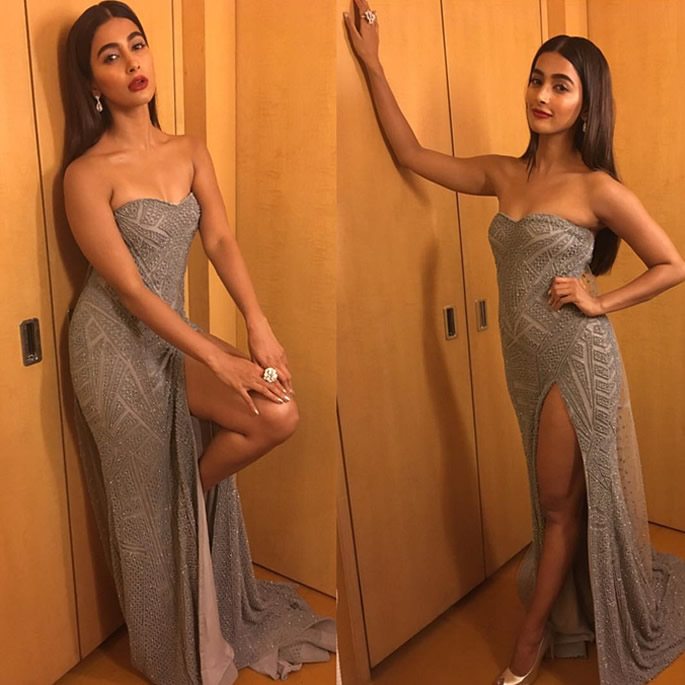 From bold red to peacock blue. The Mohenjo Daro babe wows in this elegant, red carpet outfit. The sleeveless down reveals an immense array of dazzling jewels, creating a lavish, shimmering touch. With a high slit, one can upon gaze upon Pooja’s stunning legs.

The actress keeps her hair sleek and straight, cascading down her back. With glamorous jewellery adorning her hands and ears, she pouts with a bold, red lip.

Overall, this sexy look shows how Pooja can create an elegant outfit, with seductive twists. 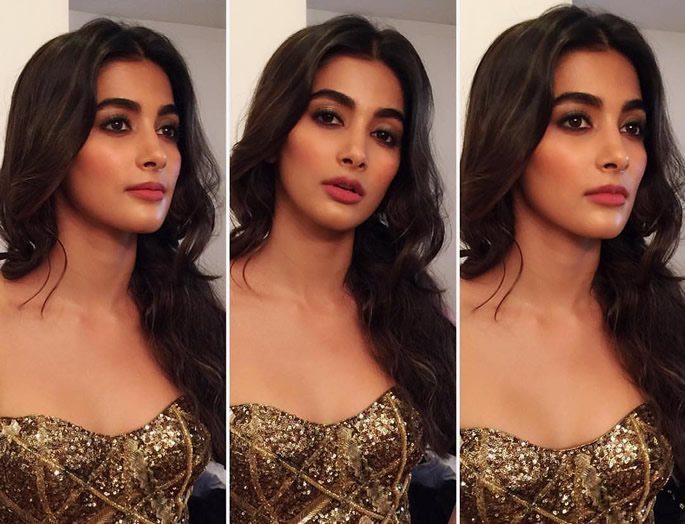 Taking some quick behind-the-scenes snaps, the Mugamodi star sizzles in a shimmering, gold bodice. The sleeveless creation complements Pooja wonderfully, as she delivers a range of model poses. Alternating between looking away and gazing into the camera, the star is truly phenomenal.

Her hair swept to one side, she showcases her ample chest.

For makeup, Pooja blends impeccable contouring with a rosy blush. With warm, gold eyeshadow and red lipstick, the actress sets pulses racing with this seductive look. 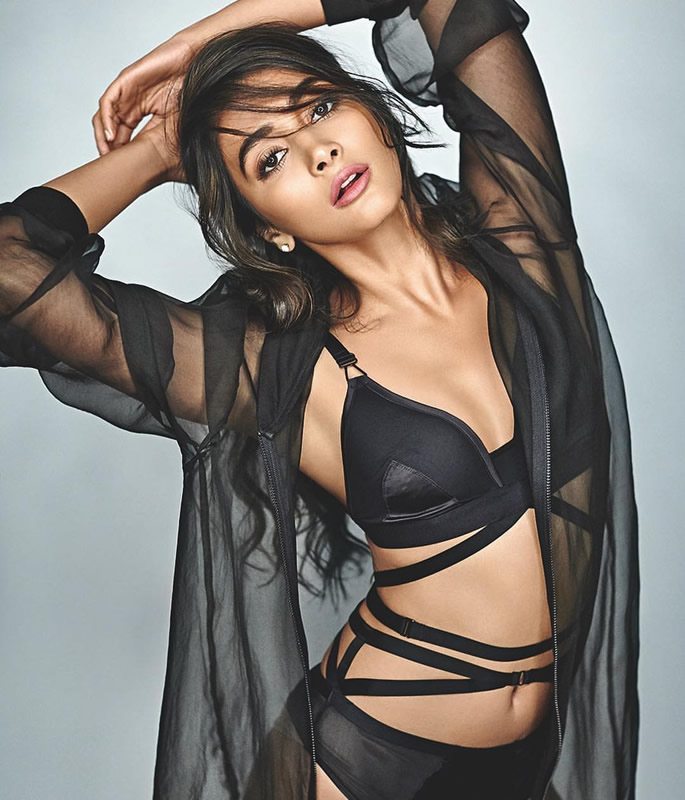 Another still from the Maxim photo shoot, this image truly hails as one of Pooja Hegde’s sexiest looks. In a glamorous, black lingerie set, she sizzles on camera.

With straps partly covering her slim torso, the starlet stretches to one side to showcase her outstanding figure. She also dons a sheer shawl, still revealing her sexy look. Pooja’s raven tresses fall flawlessly down her back; her fringe partly masking her eyes.

Ready for the Red Carpet 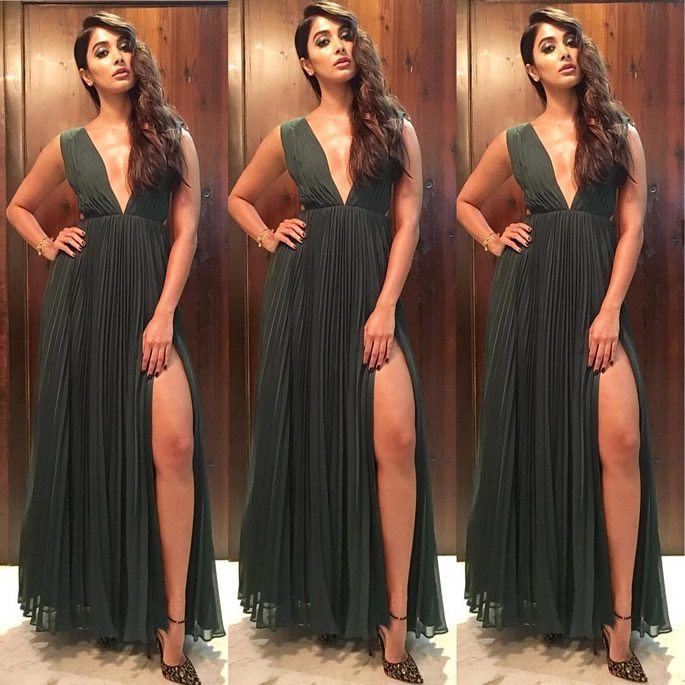 Making jaws drop at the GQ Men of the Year Awards 2017, Pooja arrived on the red carpet in this seductive number. Wearing a jade green gown, the starlet looks utterly magnificent as the outfit hugged her slim figure.

Pooja sweeps her hair to one side; wavy, chestnut tresses cascading down one shoulder. Cutting a sultry pose to the camera, she accentuates her features with antique gold eyeshadow and a creamy, pink lip.

After glancing through these 7 sexy looks of Pooja Hegde, we’re left stunned by the actress’ beauty and grace. Not only does she have impeccable taste in fashion, but she knows how to pull racy poses.

With a strong, rising fanbase, we’re sure they will agree as well. Pooja always receives positive responses when she shares an image on social media.