Pooja Hegde’s latest Instagram pictures, in which she posed in a backless blouse and striped saree, have gone viral.

“Beauty and the #Beast”

Pooja Hegde raised temperatures as she cut a feminine and flirtatious silhouette in a backless sheer green saree.

Taking to her Instagram handle, Pooja shared a series of pictures.

The pictures featured Pooja donning a white bralette top that sported mirror work and came with delicate straps and a sweetheart neckline.

It was layered with a see-through saree that too sported large abstract shaped mirrors, thread embroidery and Appliqué collection in shiny silver metallic foil.

The saree came in green and white stripes.

Pooja completed her attire with a pair of flat footwear from Cai Store and pulled back her silky tresses into a mid-parted half-clutch hairstyle while leaving them open down her back.

Pooja accessorised her look with a pair of flower-shaped earrings and a bracelet from Aulerth and Suneet Varma Couture.

Wearing a dab of pink lipgloss, Pooja amplified the glam quotient with a dewy makeup look that included rosy blushed and highlighted cheeks and pink eyeshadow. 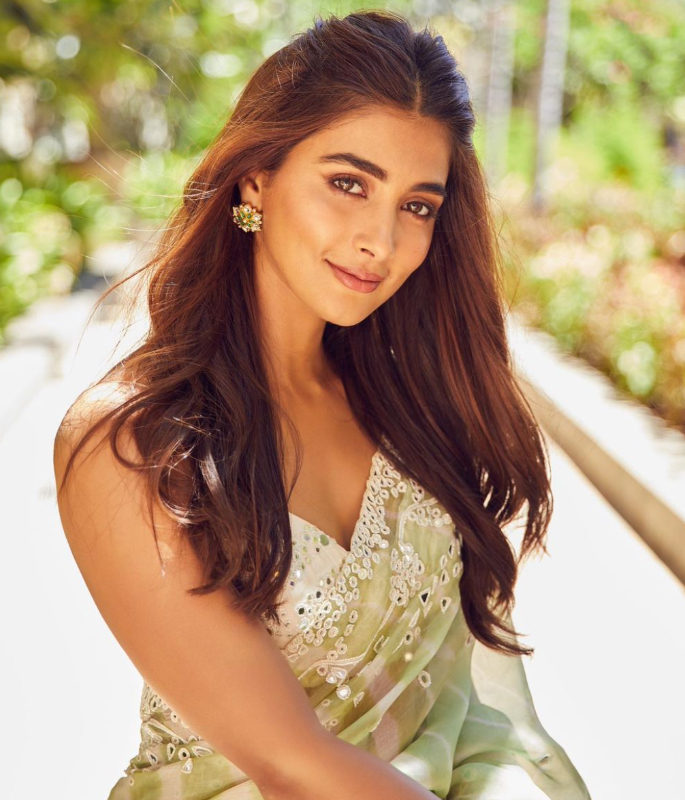 She captioned the pictures: “Beauty and the #Beast” and punctuated it with a wink emoji.

The saree is credited to Indian fashion designer Archana Jaju’s eponymous label that boasts of an eclectic combination of handloom and handicrafts of India.

Pooja Hegde was last seen in Beast opposite Vijay. 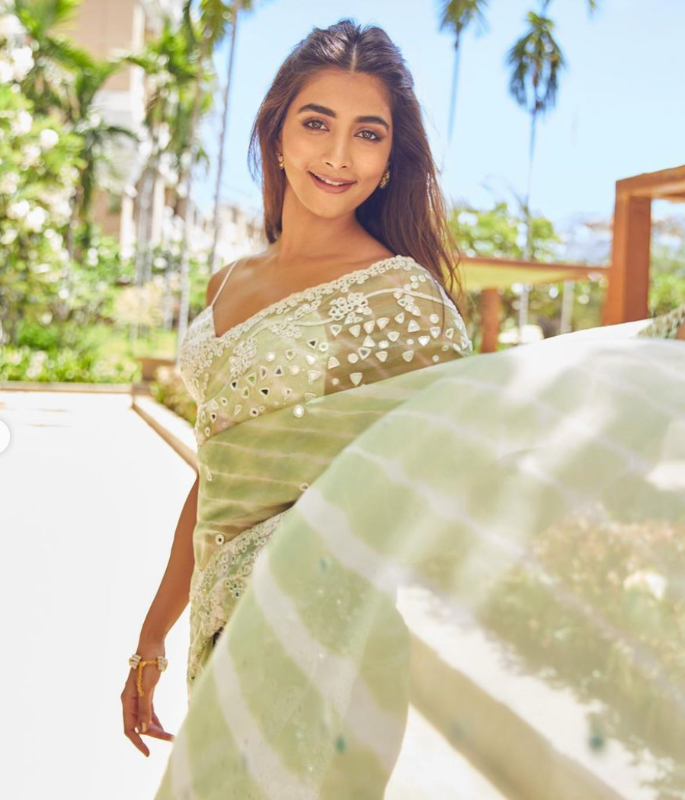 Directed by Nelson, the film sees Vijay play Veera Raghavan, a RAW agent at a shopping centre during Christmas time.

However, the shopping centre is taken over by terrorists who take the shoppers hostage.

The action film then sees Veera’s mission to rescue the hostages. At the same time, he ruthlessly takes out the terrorists.

However, after watching Beast, many have been left disappointed.

A lot of criticism was directed at the film’s second half, with one person saying:

“Stunts were good, Vijay is energetic as usual but post-interval, the movie is a disappointment.”

Although Beast‘s reviews have largely been unfavourable, many are still expected to see the film given the amount of hype surrounding Vijay’s latest.

Ravinder is a Journalism BA graduate. She has a strong passion for all things fashion, beauty, and lifestyle. She also likes to watch films, read books and travel.
Did Alia Bhatt’s Wedding Saree cost Rs 50 Lakhs?
Mahira Khan stuns in Ice Blue Anarkali