In this weekend fashion, between 7th – 8th October 2017, our Bollywood celebrities have impressed us once again with their impeccable styles.

While this edition features a few regular faces, get ready for the first glimpse of an up-and-coming star’s Bollywood debut!

Hitting headlines across the weekend, it seems we’ll soon see her on the silver screen after months of speculation.

Let’s kick things off by looking through our top picks for this week! 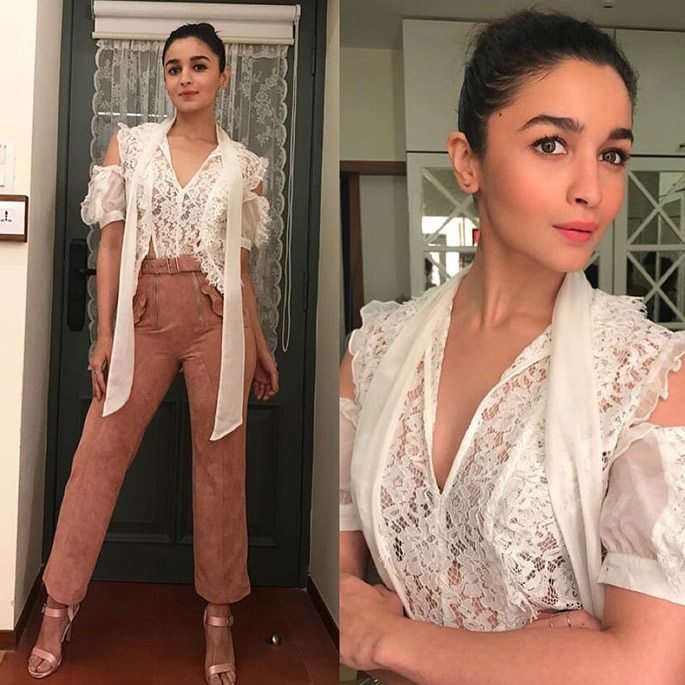 But now, the Udta Punjab star shows us she can also don fashionable, casual attire. She decided to make her outfit cool and fresh as she attended the 19th Mumbai Film Festival.

The actress matches a pair of coral pink jeans with a lacy, white top. We love this dreamy creation; with cut-out shoulders, floral lacing and a low neckline, it adds elegance to Alia’s look.

She dons a pair of pink, strappy heels to her outfit. Keeping things simple, Alia ties her hair in a plain bun and wears no jewellery. But she does add warm makeup; coral blush and rosy lipstick to accentuate her romantic look.

An outstanding star to feature amongst our top picks! 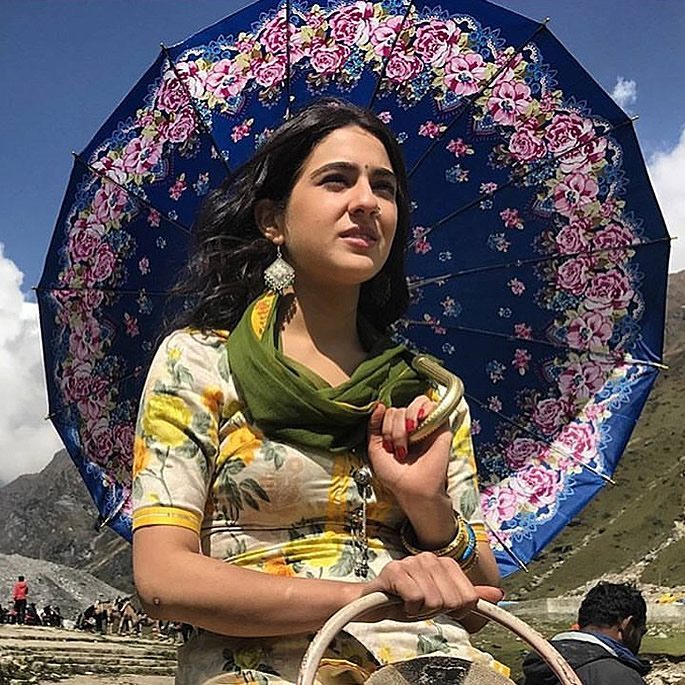 Sara Ali Khan will soon make her Bollywood debut by featuring in Kedarnath, alongside Sushant Singh Rajput. Over the weekend, fans received a first glimpse of the stunning starlet’s look with this image.

Wearing vibrant colours and floral graphics, Sara gets top marks from us.

She wears a beautiful dress, decorated with yellow, floral patterns and hues of pastel green. Around her neck, the actress adorns a jade scarf, complementing the dress wonderfully.

But we absolutely love Sara’s accessories. She matches a pair of silver earrings with various colourful bracelets. While one hand carries a wooden basket, Sara also covers herself from the glowing Sun with a gorgeous umbrella. Depicting a blue background with pink, floral designs, the accessory matches well with Sara’s look.

Will we see more of Sara’s enchanting outfits in Kedarnath? We certainly hope so! 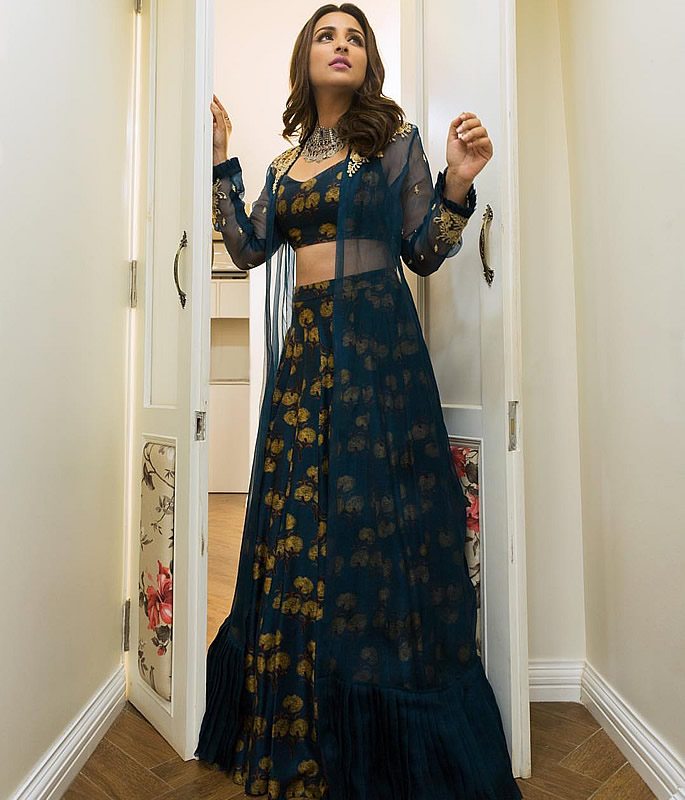 Parineeti Chopra looked utterly incredible when she shared this image with fans over the weekend. Donning a traditional outfit, the star carries sophistication and elegance.

She wears a visually stunning, dark turquoise lehenga, depicting yellow floral patterns. She covers her outfit with a sheer shawl, still revealing her dress. Created with a dark turquoise material, it contains regal embellishments on the cuffs and shoulders.

To make a bigger statement, Parineeti adds a glamorous, gold choker necklace. The star also lets her hair down in loose waves, highlighting her chestnut locks.

For makeup, she wears a pastel pink lip, with memorising smokey eyeshadow and mascara. 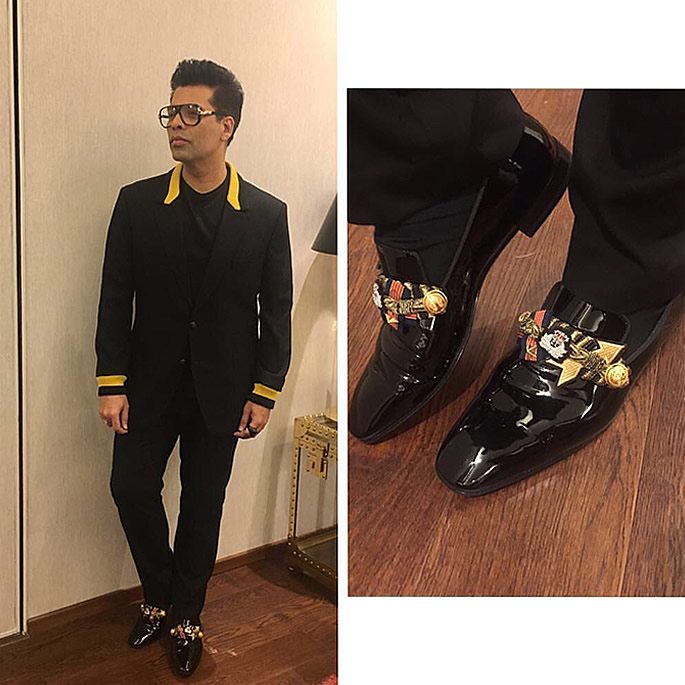 Another fashion icon to grace our list for the weekend fashion. Filmmaker Karan Johar was another attendee of the Mumbai Film Festival, joining Alia Bhatt and Ranbir Kapoor.

The director decided to combine the classic suit with updated, quirky twists to create a lavish look.

He dons an all-black ensemble; pairing a blazer and trousers with a simple, black shirt. But we’re impressed with the yellow horizontal stripes, decorating Karan’s cuffs and collar. A much-needed splash of colour, making the suit vibrant.

Karan is known for wearing intriguing, fashionable shoes; this hails as no exception. Check out the sleek, trendy embellishments on Karan’s Louboutin footwear! 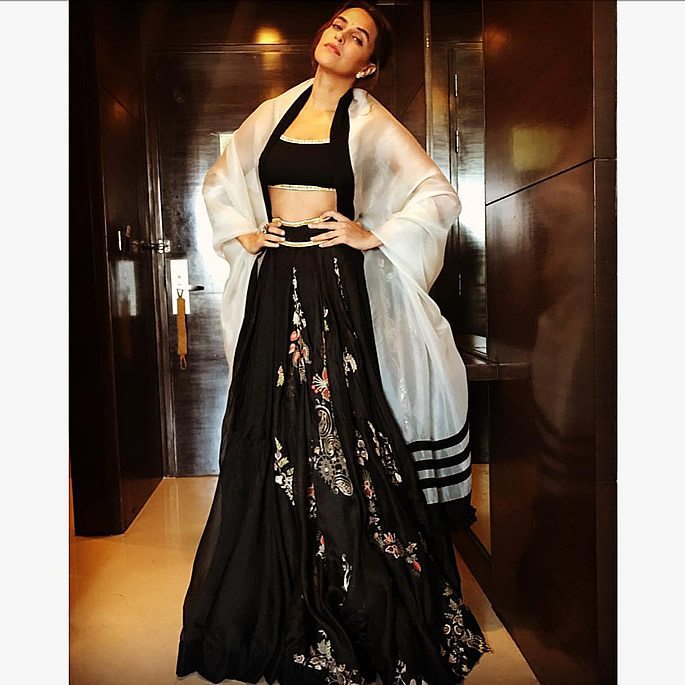 Neha Dhupia enters into our list for the weekend fashion with this luxurious lehenga. The starlet has faced a rough year when it comes to fashion, following an unflattering outfit at the IIFA Rocks 2017.

But now, she’s impressed us by wearing a magnificent Anamika Khanna creation. A black base, it contains memorising, shimmering embellishments. With gold panelling and a low, round, neckline, Neha exudes glamour and sophistication.

She adds a cream dupatta, finished with black stripes down its length.

For her hair, Neha ties it up into a stylish bun with side locks framing her face. Finishing the regal look, the actress wears a rosy, red lip alongside creamy brown eyeshadow.

After gazing through our captivating top picks for the weekend fashion, we’re left impressed by their stylish outfits. Especially with Alia Bhatt and Sara Ali Khan’s elegant, romantic creations.

Neha and Parineeti also stole our hearts with their memorising, traditional looks. With the right combination of outfit, accessories and makeup, they showed us how to rule the fashion game.

We also can’t forget Karan Johar and his impeccable taste. With trendy footwear and twists on old classics, the director knows how to pull off daring choices.

With so many enchanting looks to brighten our Monday, we can’t wait to see who will feature in our next edition!