IIFA Rocks 2017 took place in New York, as part of the annual IIFA Weekend. We check out the best-dressed men and women of the night.

This year, they aimed to set the bar high and impress Bollywood fans.

After the thrilling highlights from the IIFA Press Conference and the subsequent IIFA Stomp, the 14th July marked the thrilling IIFA Rocks 2017.

This captivating, musical event celebrated 25 years of A. R. Rahman, along with singer Diljit Dosanjh as the headline performer.

IIFA Rocks 2017 also witnessed a medley of stunning performers such as Mika Singh, Neeti Mohan amongst others.

And on the Green Carpet, the stars arrived in an array of glamorous gowns and smart suits. This year, they aimed to set the bar high and impress Bollywood fans.

Let’s check out the best-dressed men and women of the night, while also noting some of the misses. 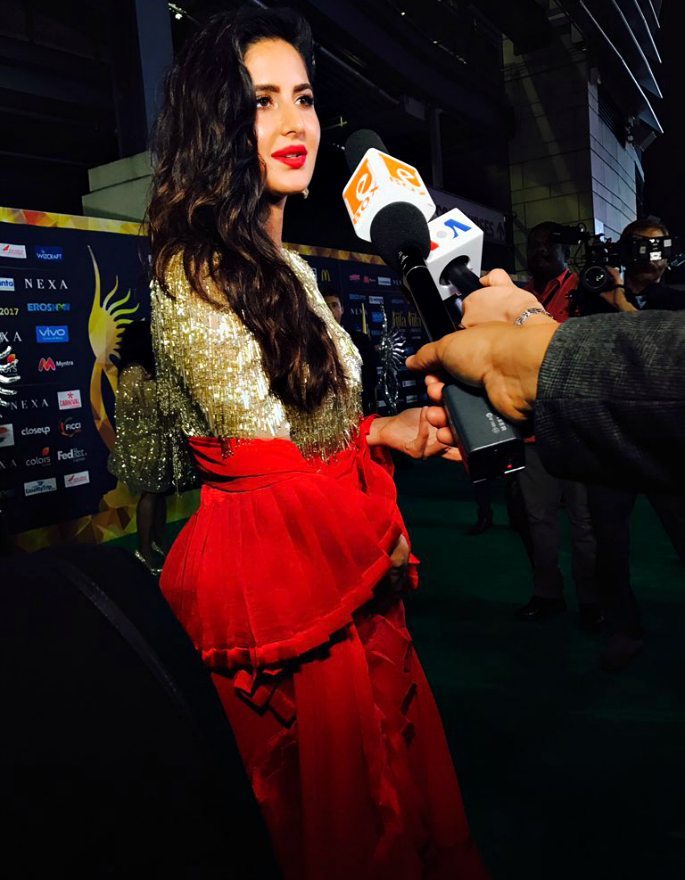 Katrina Kaif impressed everyone at IIFA Rocks 2017 with this intriguing red and gold ensemble. The sleek gown revealed a shimmering gold bodice, changing to red downwards.

With flared-out sleeves, the actress has kept with 2017’s current fashion trends. The starlet also opted for gold chandelier earrings and a full red lip, to complement her dress.

Such a bold choice for the Green Carpet, yet Katrina Kaif pulls it off like no other! 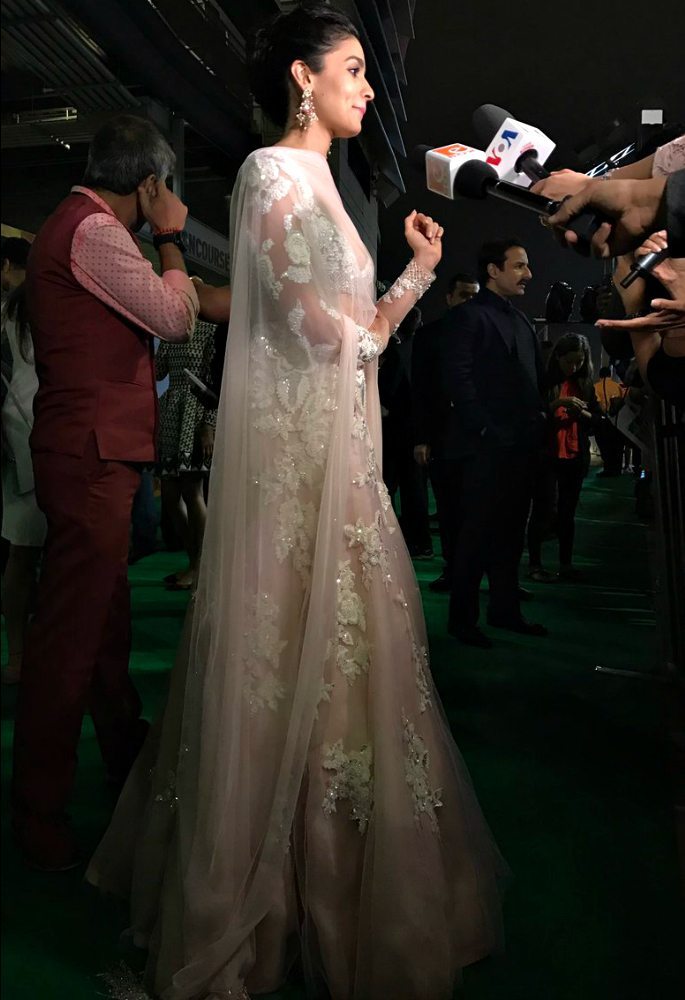 For her debut appearance at IIFA Weekend 2017, Alia Bhatt chose another spectacular outfit for the night’s Green Carpet. This time, opting for traditional attire.

The actress also kept her hair pinned back into a modest bun and stuck to pinks in her makeup. We can’t wait to see what Alia Bhatt will wear for the awards ceremony itself. 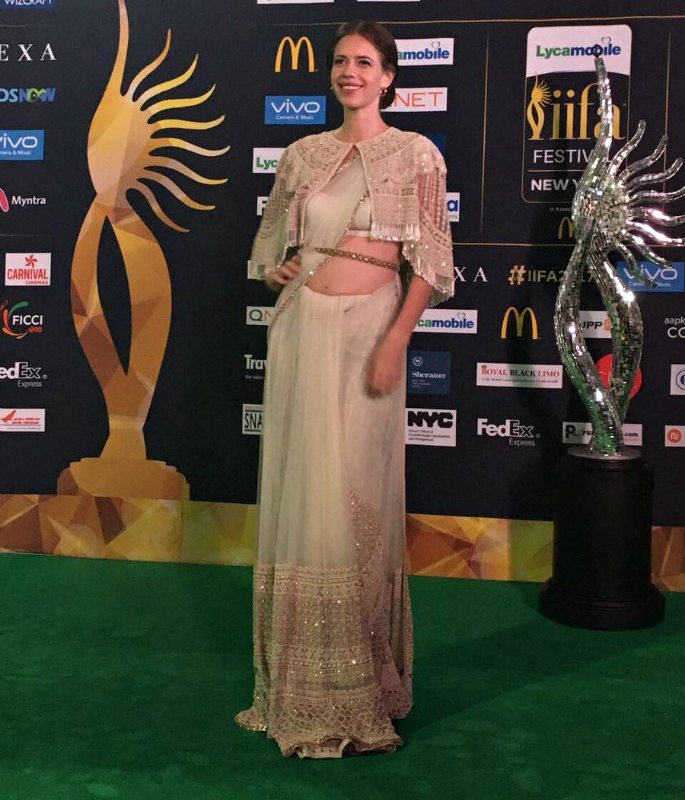 Kalki Koechlin also stunned with this captivating outfit on the evening. Also opting for traditional attire, the star similarly wore a cream saree, designed by Sabyasachi.

We also love the eye-catching shawl, which too was adorned with embellishments and intricate detailing.

The actress kept her hair pinned back, leaving all the focus on her beautiful saree. Definitely one of the best-dressed of the night! 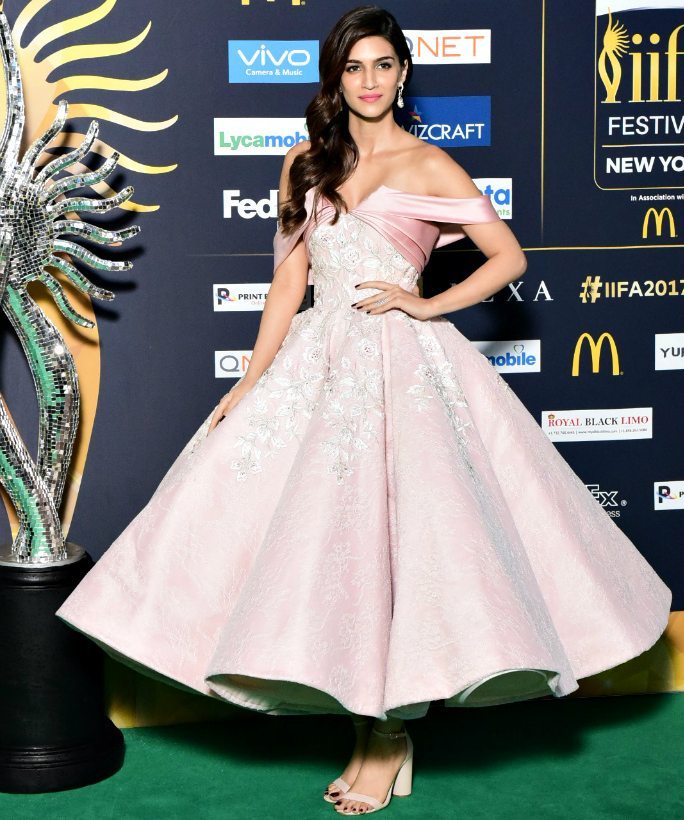 One of the most spectacular gowns of the Green Carpet! Kriti Sanon appeared an utter dream with this fairy-tale inspired gown.

With a Bardot neckline and cinched bodice, Kriti Sanon looked regal as she swept her hair to one side. We also got a glimmer of her stunning heels, also light pink.

On social media, Kriti compared herself to Cinderella and we certainly have to agree! 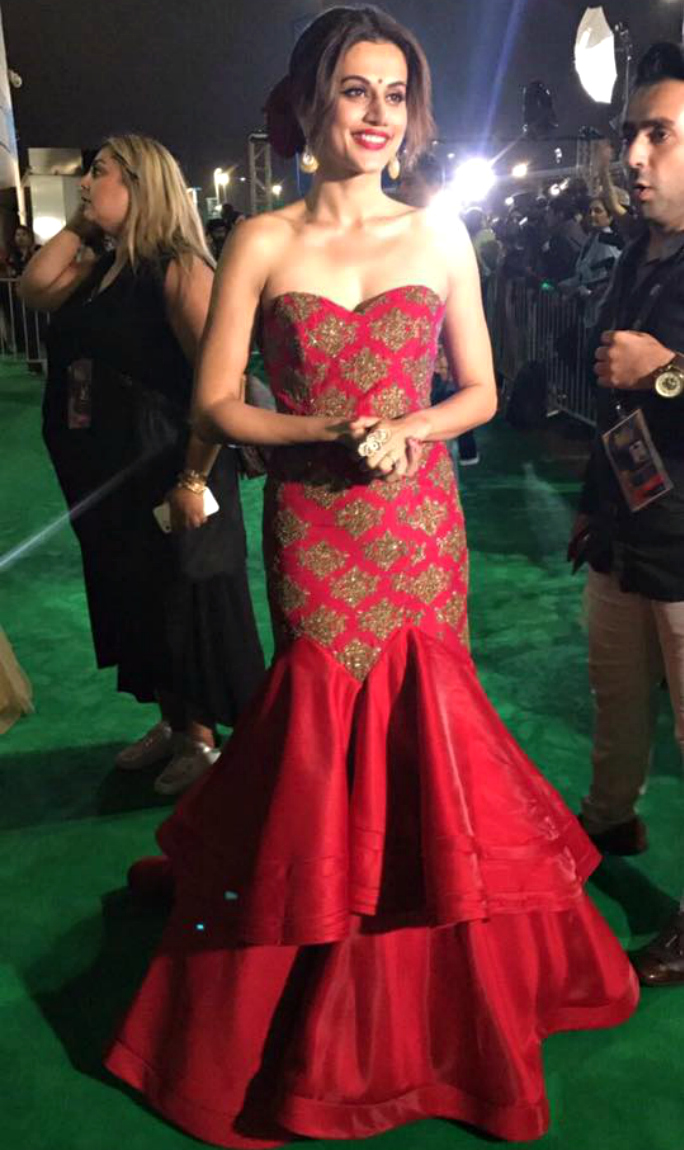 Designed by Kommal Sood, the gown also revealed some volume as it flared out, adding a romantic touch.

Taapsee also stuck to a similar colour scheme in her makeup and jewellery. Gold earrings paired beautifully with red lipstick and black eyeliner.

Overall, the actress has picked a superb outfit for the IIFA Rocks 2017. 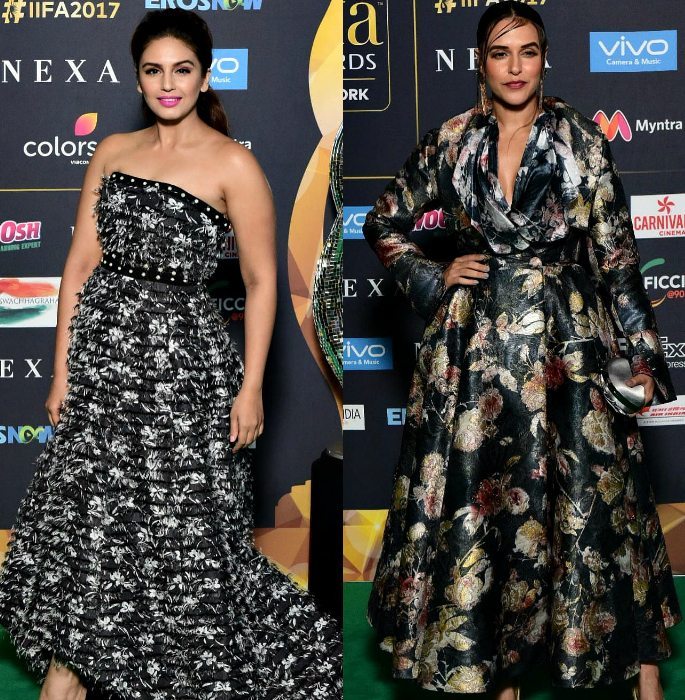 Unfortunately, some of the stars didn’t pick such great hits for their looks.

While it showed her lovely figure, it didn’t leave a great impression with its fur trimmings. In addition, Huma’s makeup mismatched with the dress, as she went with a bright pink lip.

Nehad Hupia’s gown also proved to be a miss as it appeared to swamp the actress in heavy fabric. Her fringe also had a wet look to it which didn’t suit her. 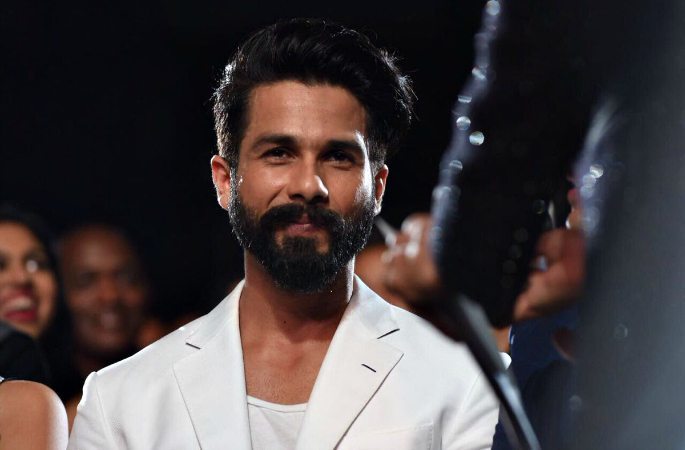 Shahid Kapoor caught all eyes with this unique, crisp suit. The actor wore a white blazer over a plain tee-shirt with trousers. He finished off the look with smart, black trainers.

We particularly love the blazer, as it reveals black panelling on the sleeves. Creating an edgy style to it.

Shahid kept his hair to perfectly tousled fashion and cut a fine figure on the Green Carpet. 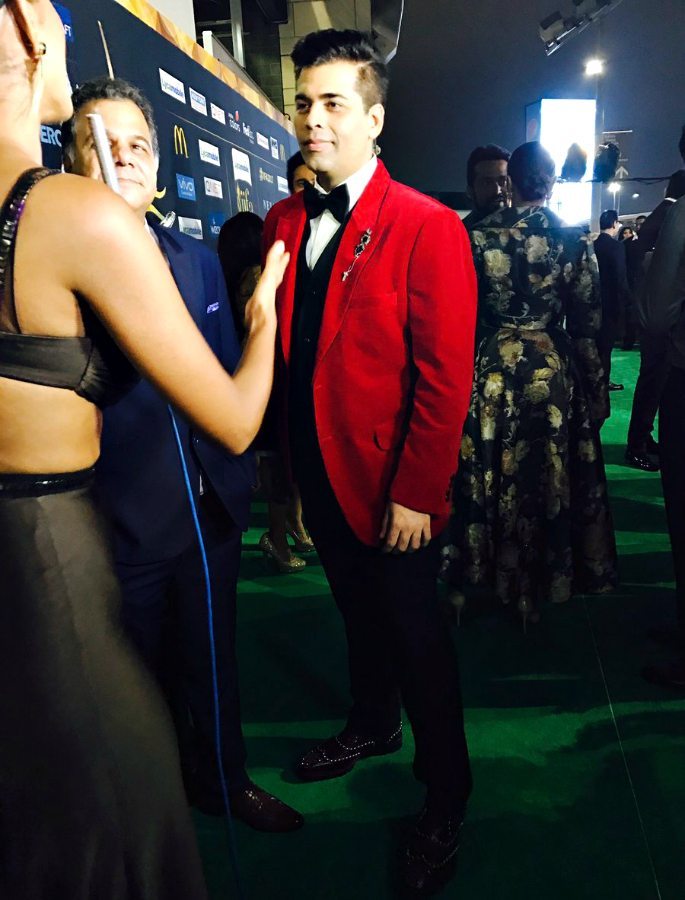 Filmmaker Karan Johar also stepped outside of the box with this handsome look. The highlight certainly belongs to his bold red blazer, which looked superb on the star.

Under the blazer, Karan wore an impeccable white shirt with a black waistcoat and trousers. Finishing off with super stylish shoes, we love their bejewelled look.

Overall, Karan Johar kept to a fantastic style with his attire for the night. We can’t wait to see what he will wear when he hosts the IIFA Awards ceremony. 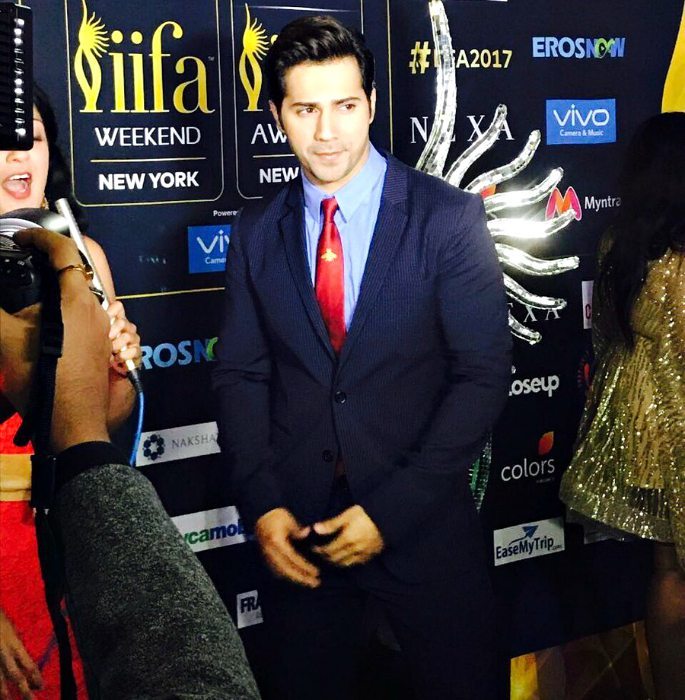 Another excellent look for the IIFA Rocks 2017 Green Carpet. Varun Dhawan cut a handsome figure in this blue suit.

Wearing a navy blue blazer and trousers, he added a crisp, light blue shirt and red tie. With the blazer buttoned halfway, Varun showed he knows how to pull off intriguing, stylish looks.

With perfectly tousled hair, the actor has simply taken our breaths away with this fantastic look. 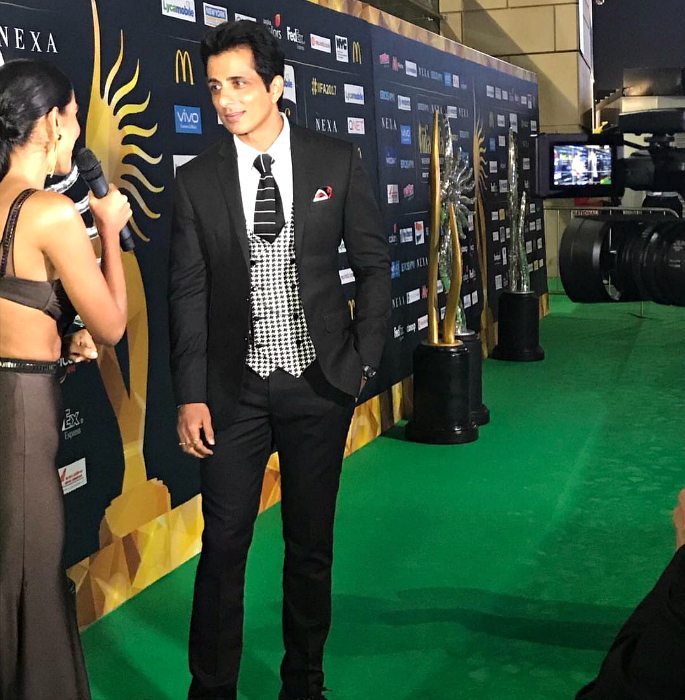 He also donned a black tie, edge with white, thin strips. What an intriguing mix of patterns! Yet it works extremely well.

Adding a touch of colour with a red handkerchief in his blazer, Sonu showed us how to create an intriguing, yet timeless fashion style. 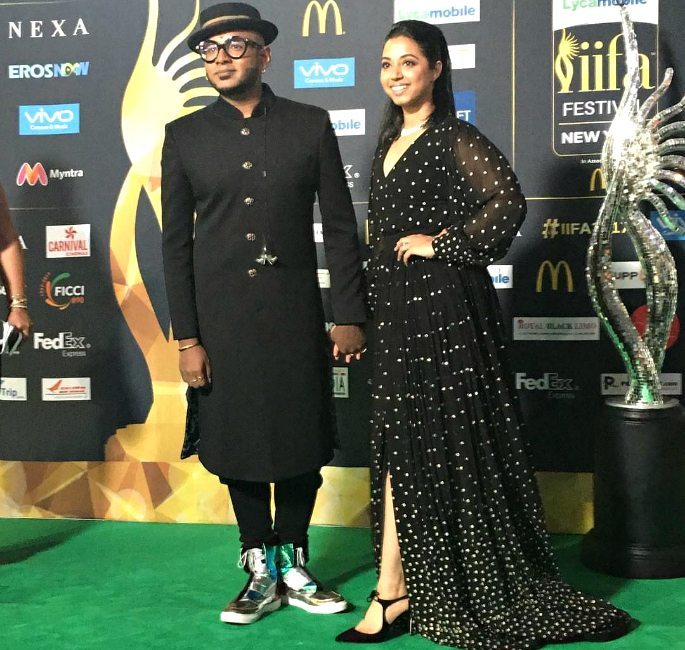 Attending the Green Carpet with his wife, Catharine Thangam, the couple both looked amazing in their attires. In particular, Benny Dayal knows how to work his alternative style and create outstanding looks. 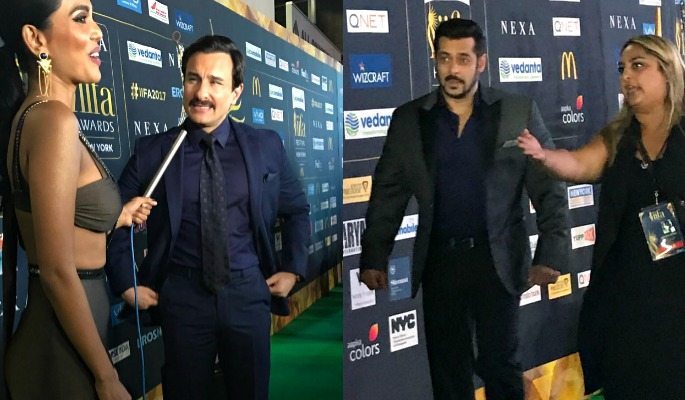 Perhaps two surprising entries, but Saif Ali Khan and Salman Khan both seemed to have played too safe with their suits.

The two actors both arrived at the IIFA Rocks 2017 in all dark ensembles. Unfortunately, they appeared quite unimaginative and, dare we say, slightly boring.

Let’s hope the two can pull out exciting looks for the big awards ceremony itself.

On the Green Carpet, we have witnessed an array of fascinating looks. We love the varied mix of both Western and traditional outfits, all tailored to a high standard.

So far, the reigning trends this year seem to lie in shimmer, bold red and fairy-tale inspirations.

Now as fans look forward to the IIFA Awards 2017, they will eagerly await to see what the stars will arrive in for the prestigious event.

Find out what else lies in store for the IIFA Weekend 2017 here.