As IIFA Awards 2017 kicks off, DESIblitz will be in New York amidst all the action. Here’s what to expect from the star-studded Bollywood extravaganza!

"I am very grateful to IIFA for giving me a chance to perform."

One of the most awaited Bollywood awards ceremonies of the year, the IIFA 2017 Awards extravaganza is coming to New York.

Taking place between 13th-15th July, DESIblitz is excited to announce that we will be covering IIFA Awards in the Big Apple itself.

However, it’s not just the Awards show to be enthusiastic about, but the string of events in the 72 hours leading up to the grand finale.

The 18th edition of the IIFA Awards 2017 will see Saif Ali Khan and Karan Johar hosting the star-studded night.

The awards ceremony will feature Varun Dhawan making his IIFA debut with a performance, unveiling songs of Judwaa 2, and will also be co-hosting a segment of the show.

Over the past month, these stars have been promoting IIFA at a number of special press conferences. Alia, Salman and Katrina recently expressed their excitement for IIFA 2017. Salman told press:

“It always feels great to be a part of the IIFA Movement and I look forward to the 2017 IIFA Awards.” 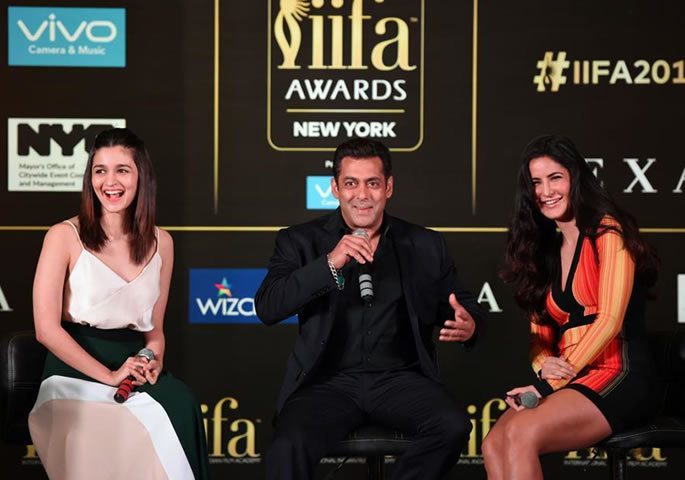 Katrina Kaif added: “I’m really excited and looking forward to performing at the IIFA Awards this year. It is such a great platform that not only showcases the celebration of cinema globally, but also it’s a great opportunity for us to reach out to our fans worldwide. I am excited that this year, it is happening in one of my favourite cities – New York!”

Alia is another IIFA debutante and expressed: “I am very excited to be a part of IIFA 2017, as this is going to be my debut at the IIFA Festival after 5 years in the industry.

“I am super excited that IIFA is being held in the beautiful city of New York. IIFA is all about togetherness and the celebration of the Indian cinema globally and I eagerly look forward to this celebration.”

In a press conference held in Mumbai, Sushant Singh Rajput shared his thoughts on performing: “I have always been excited for IIFA since my college days, because that’s when my association with IIFA began.

“From being a background dancer to performing for the audiences as an actor, IIFA has always been very memorable to me. I am very grateful to IIFA for giving me a chance to perform.”

The day before this, the stadium shall transform into a dazzling musical extravaganza for IIFA Rocks. Celebrating an illustrious 25-year career for A. R. Rahman, there will be a tribute made to him at this year’s IIFA Rocks.

This will include a medley from artists such as Mika Singh, Mohit Chauhan, Jonita Gandhi, Neeti Mohan among others accompanying him. 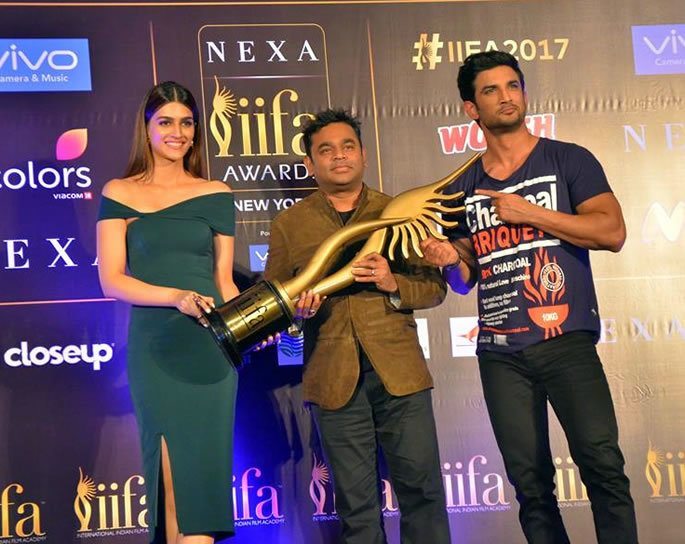 Commenting on the occasion at the press conference, A. R. Rahman said:

“The 18th Edition of IIFA in New York is very special to me and I look forward to sharing the IIFA Rocks stage with such talented names in the industry. I am honoured to be a part of the IIFA celebrations.”

There will also be a performance from Diljit Dosanjh and the evening will be hosted by Riteish Deshmukh and Manish Paul.

Times Square is all set to be abuzz with a free-for-all public entertainment at Myntra presents IIFA Stomp to be held on 13th July 2017.

IIFA Stomp is all set to build the momentum of the awards show with an entertaining mix of fashion, music and dance. This will range from Varun Dhawan showcasing his DJ skills to a glamorous Fashion Show featuring star sibling, Shraddha and Siddhanth Kapoor, Disha Patani and Tapsee Pannu.

A first-time addition to the IIFA itinerary is the Shuruaat Gala Dinner, a charity fundraiser organised by IIFA in association with The Global Education and Leadership Foundation, and The Pierre in New York.

A star-studded evening, Shuruaat Gala Dinner at IIFA shall bring together the biggest celebrities from Bollywood, and leaders from business, philanthropy, media, education and the Arts.

A business networking platform called the FICCI-IIFA Global Business Forum 2017, will also be happening at the same time in order to enhance the growth of businesses and address global issues.

As IIFA brings together the biggest stars of Bollywood and Hollywood, the IIFA Festival New York will present some of the most celebrated stars and musicians of the Indian film industry, notable guests, and dignitaries from India and the region, world media and Indian cinema fans from across the globe.

DESIblitz cannot wait for the IIFA excitement to begin! Stay tuned for all our IIFA 2017 coverage from New York!