Salman Khan takes his mother Helen to New York for the annual IIFA’s. Fans were left impressed with how the actor became the perfect, protective son.

With such an inspiring story behind her, fans will undoubtedly welcome Helen's appearance.

Salman Khan became the perfect son as he took his mother Helen to New York for the IIFA Awards 2017. The duo headed to Mumbai airport on 11th July 2017 for their flight to the US destination.

With many stars from Bollywood now catching flights to the annual IIFA’s, many have brought along their partners or gone on their own.

However, Salman Khan decided to bring along Helen, who has earned herself a famous career in Indian cinema.

And as they faced a horde of Indian paparazzi, the actor showed his protective side as he held Helen’s hand as they made their way. Staying by her side and leading the way, fans of Salman Khan will undoubtedly feel impressed and proud of the star.

Salman kept to a casual dress code of a tee-shirt with jeans. Meanwhile, Helen appeared smart in all-black, matched with a blue shawl. 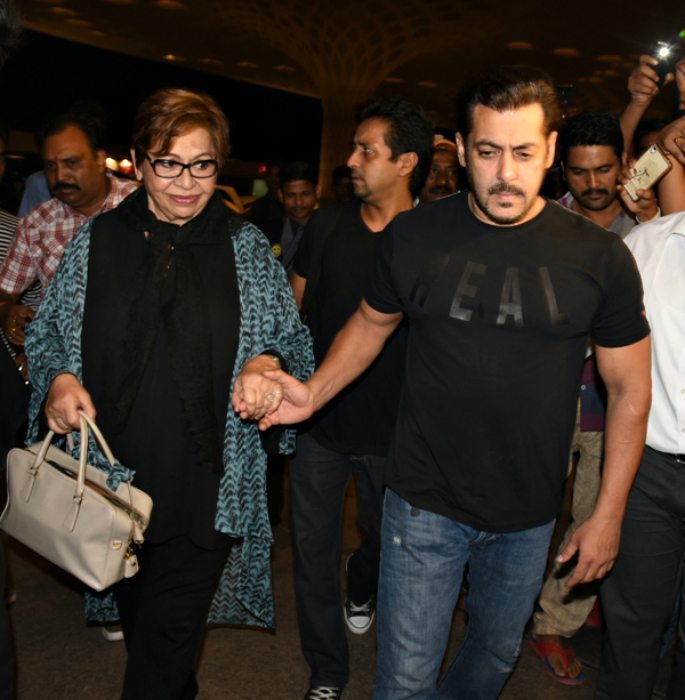 Helen, who became Salman’s mother after she married his father Salim Khan in 1981, hails as Bollywood’s first ‘item girl’. Her breakthrough role in Howrah Bridge (1958), where she performed ‘Mera Naam Chin Chin Chu’, led her to many successful roles. She also earned the nickname ‘the H-bomb’.

However, the actress endured a difficult childhood. Born in Burma, her family endured a lengthy trek to Mumbai during the Second World War. Their survival relied on the generosity of villages they crossed through, of which many would offer food and water.

And as the family lived in Calcutta, Helen decided to leave education to help financially support her mother. Going through various jobs, her skill of dancing helped her in paving an amazing Bollywood career.

With such an inspiring story behind her, fans will undoubtedly welcome Helen’s appearance at the IIFA’s. And applaud Salman Khan for bringing her to the prestigious awards ceremony.

The actor himself will have plenty to look forward to in the IIFA’s. Not only will he perform with Katrina Kaif on stage, but he also has a nomination for the Best Actor in a Leading Role category. However, he has remained tight-lipped on what to expect at the event.

He has previously said:

“If you are invited for dinner at a friend’s place, do you ask for the menu? No, you just go with the impression that you will have a good time. So, come for IIFA because I will make sure that you have a great time.”

As the IIFA Awards 2017 approaches, none will need reassurance that the event will hail as an enjoyable experience for many. But while Salman Khan mentions little of the event, you find out more details on the IIFA’s here.

We look forward to seeing more of Helen with her protective son Salman at the awards ceremony.