"It’s not about gender. It’s about, like, shapes. And what feels good on you that day."

Zayn Malik and Gigi Hadid grace the cover of the August 2017 edition of Vogue. Creating ultimate ‘couples goals’, it marks the second time the two have appeared together on the cover.

The August edition was revealed on 13th July 2017.

It depicts both Zayn Malik and Gigi Hadid looking loved-up, as the latter smiles to the camera. Zayn instead gazes at Gigi and places a hand on her shoulder.

But while fans are amazed by the couple’s romantic pose, they were left speechless by their fashion-forward styles. In this edition, Vogue decided to make gender neutrality the theme of Zayn and Gigi’s photo shoot.

On the cover, they dress in quirky suits, containing an array of intriguing designs and patterns. The duo looks completely comfortable and relaxed in their clothing, of which they feel shouldn’t be bound by gender. 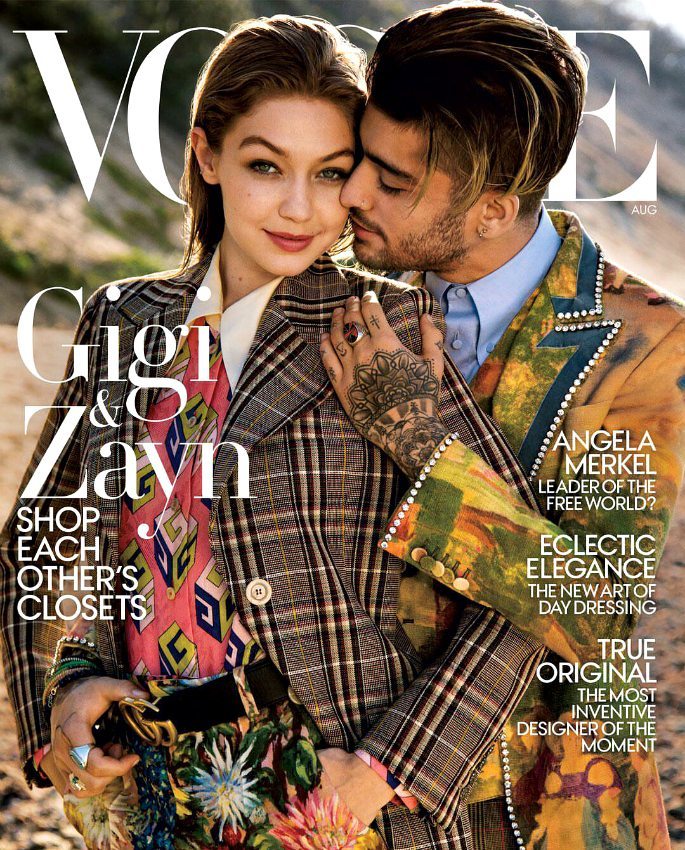 Gigi says to the magazine: “It’s not about gender. It’s about, like, shapes. And what feels good on you that day. And anyway, it’s fun to experiment.”

Zayn also added: “People our age, we’re just chill. You can be whoever you want as long as you’re being yourself.”

The magazine has also released additional images of the star couple. Following on from the cover, they continue to wear gender neutral clothing. With these pieces, they show off their on-trend style, with fabulous patterns, involving contrasting stripes, floral and peacock feathers. 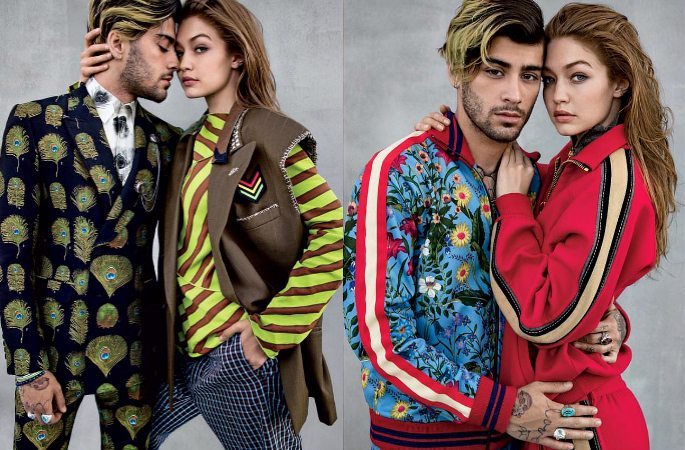 Zayn Malik and Gigi Hadid have previously starred on the cover of Vogue, back in April 2016. And they have also participated in various photo shoots with each other, such as the 2017 Spring/Summer collection of Versus Versace.

In the magazine’s feature on the couple, they also explained how they often wear each other’s clothes. Showing they feel comfortable with who they are, regardless of social conventions. Zayn also added:

“With social media, the world’s gotten very small and it can seem like everyone’s doing the same thing. Gender, whatever—you want to make your own statement. You know? You want to feel distinct.”

However, the interview with the couple has sparked some controversy. Many on social media arguing that sharing clothes does not make you “gender fluid”.

For example, some have argued that the couple doesn’t serve as suitable role models for talking on gender fluidity. As they are straight and cisgender.

straight cis couple shares clothes, Vogue declares them gender fluid. Teen Vogue is gonna have to clean this one up for Mama Vogue. pic.twitter.com/0VdVKadBbq

They also criticise Vogue for sensationalising gender neutrality between the couple, who simply like wearing similar kinds of outfits. Particularly as many trans and nonbinary people can suffer abuse simply for the clothes they wear on a daily basis.

For Zayn and Gigi to ‘sensationalise’ the topic has arguably steered away from the real issues of gender fluidity.

doesn't vogue think non binary/gender fluid people would have been great to talk to abt gender fluidity? not gigi hadid and zayn malik?

Whether the magazine will comment on these criticisms remain unknown. But it appears that the media still have a long way to in understanding gender fluidity.