7 Stylish Looks of Alia Bhatt you Need to see

As Alia Bhatt becomes well-known for her fashion sense as well as her Bollywood performances, let’s take a glance at some of her best stylish looks.

With this stunning gown, Alia shows off her edgy yet glamorous style.

Alia Bhatt has become one of Bollywood’s most famous and loved actresses in recent times. Since making her debut in 2012 with Student of the Year, the 24-year-old’s career has gone from strength to strength.

She continues to marvel her fans with her incredible performances in a variety of successful films.

And we haven’t even begun to list the multiple awards she has won, most notably three Best Actress awards for her portrayal in Udta Punjab (2016).

While she stars in blockbuster hits, Alia Bhatt has become a popular star on social media. She regularly updates fan with her stylish outfits, revealing her trendy fashion sense.

Let’s gaze upon some of Alia’s stylish looks! 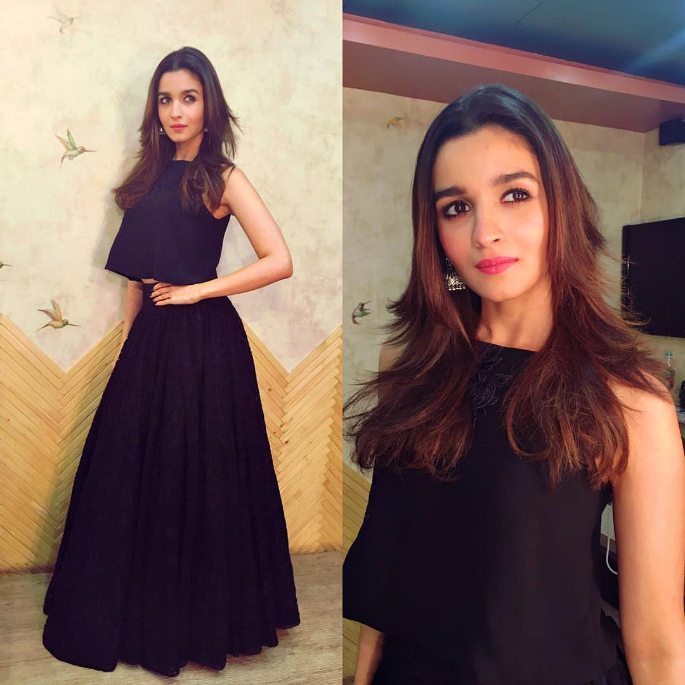 With this stunning gown, Alia shows off her edgy yet glamorous style. Attending the Mirchi Music Awards back in February 2017, the star wore this all-black ensemble. The pairing of the sheer black top with a long pleated skirt revealed a glimpse of Alia’s trim torso.

Taking a closer look at the skirt, it also contains regal embellishments, adding a touch of elegance to the actress’ look. Altogether, Alia Bhatt has created a flawless outfit for evening wear.

She also styled her hair in swept-back waves and added a splash of colour with a pink lip. While the starlet opted for minimal jewellery, she showed how “less is more” always works in fashion. 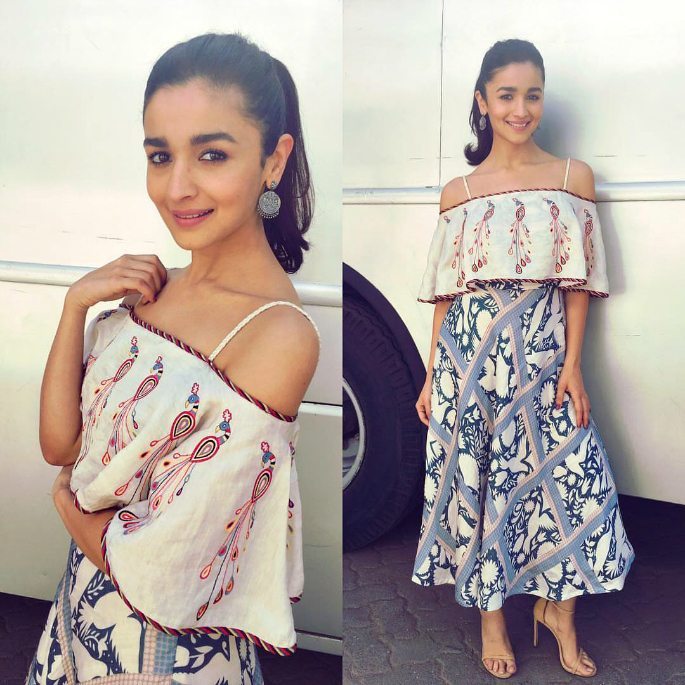 This gorgeous day look also highlights how Alia looks fantastic in all kinds of patterns. She matched a cream top, patterned with colourful peacocks, with a beautifully decorated skirt. Criss-crossed with blue and cream stripes, it reveals panels of delicate designs of birds and flowers.

This combination of colours and patterns match extremely well and result in a fun, vibrant look.

With her hair styled back into a simple ponytail, Alia looks radiant with immaculate contour and pink lipstick. 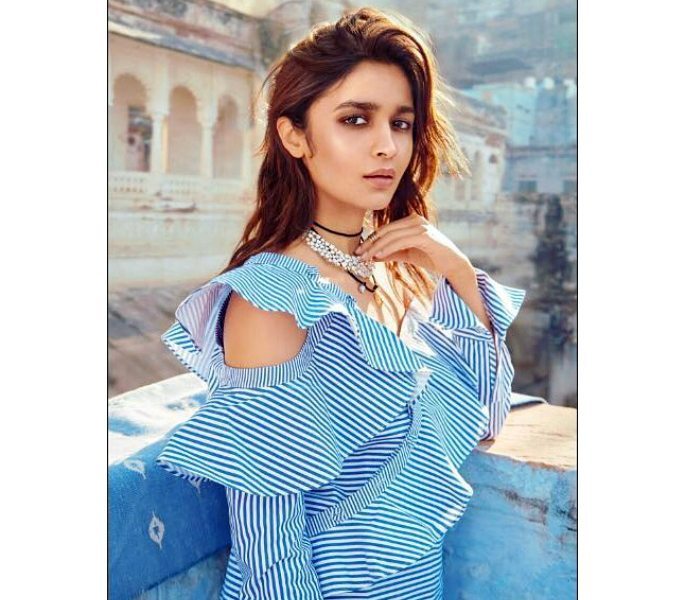 In this beautiful photo shoot, Alia gazes straight at the camera with an incredibly mesmerising pose. Wearing a blue and white striped top, it contains intricate detailing both on the sleeves and shoulders.

With flared fabric and cut-out shoulder tops, the actress once again shows off her edgy style. She also adds two necklaces; one a choker and the other donned with cream jewels.

Set against the backdrop of a majestic location, Alia Bhatt looks utterly divine as the Sun’s rays outline her swept back chocolate locks. 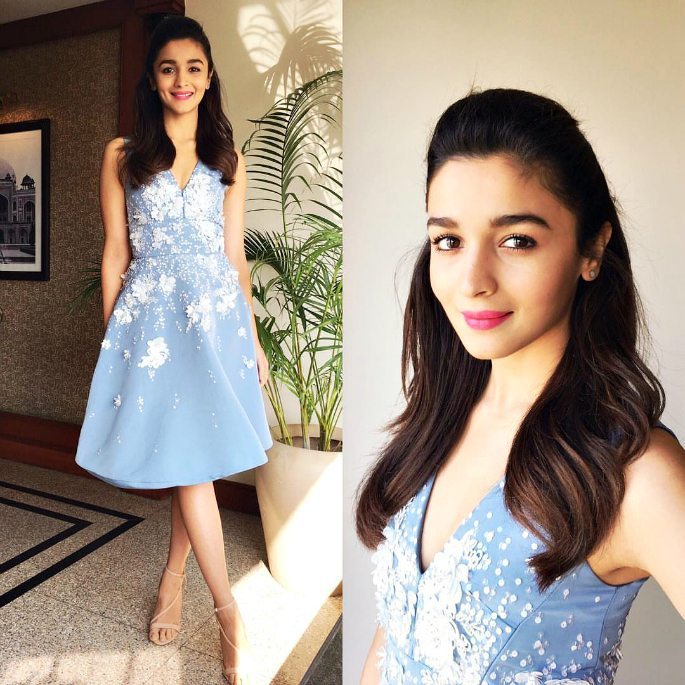 Cinched at the waist, it shows Alia’s flawless figure, whilst also flaring out to create a simple, stylish look.

Again, Alia adds nude heels to the look, making sure all the focus stays on her fashionable outfit. She also styles her hair in loose waves cascading to her shoulders. 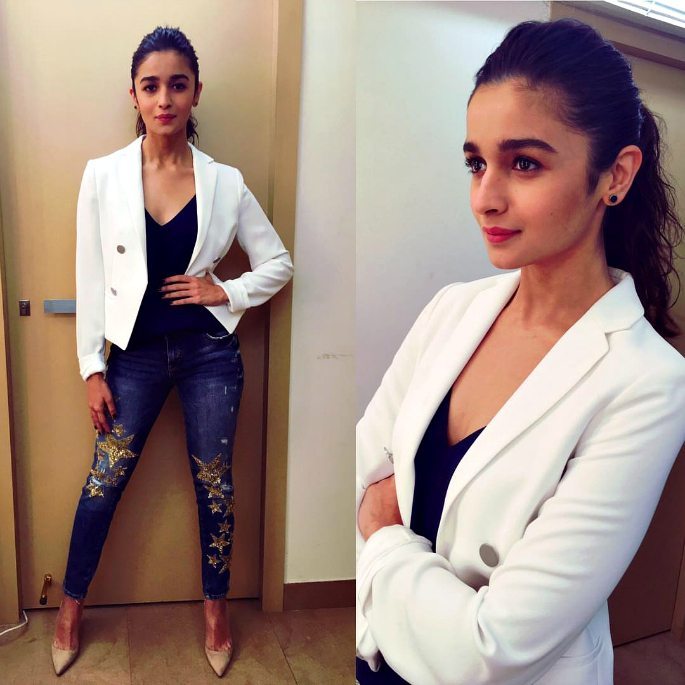 In this look, Alia pumps up the glamour by pairing a crisp white blazer with a royal blue top and dark denim jeans.

We particularly love the embellished jeans, decorated with glittering gold stars. While some would struggle to pull off such a risky fashion choice, Alia has styled them out well, making them the focal attraction of this outfit.

The Bollywood starlet styles her hair back in a beachy waves ponytail.

Finishing the look with caramel heels and purple nails, Alia Bhatt shows why she’s one of Bollywood rising fashionistas. 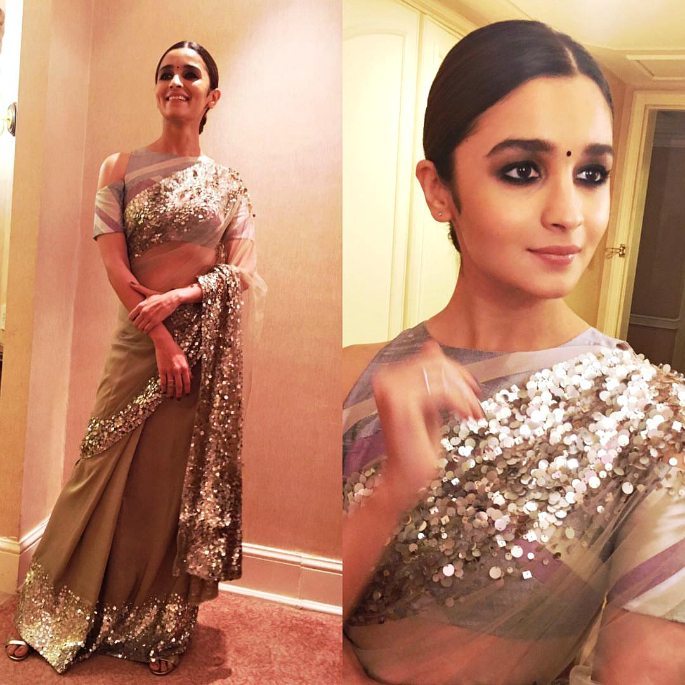 Opting for a more traditional look with this breath-taking saree. Combining colours of purple, gold and lots of glitter, we’re left stunned by Alia’s beautiful style.

In particular, the detailing of gold sequins really adds a new level of style to the actress’ look. Making it eye-catching and vibrant, Alia knows how to add modern twists to traditional attires.

Keeping to a similar colour scheme in her makeup, she adds dark eyeshadow and plenty of eyeliner. With hair swept back into a classic bun, Alia Bhatt appears as both stylish and regal.

Fun and Stylish in Black 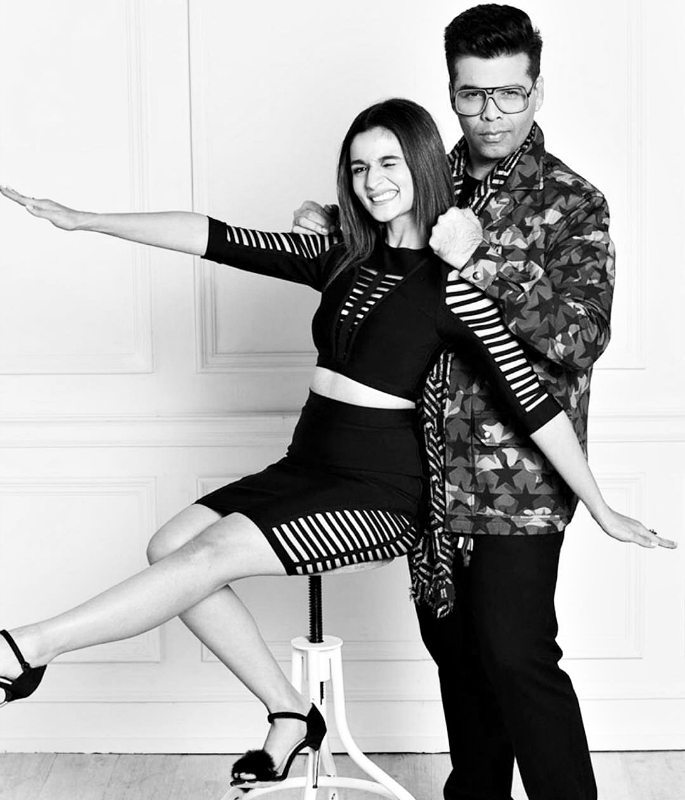 Posing together with the man behind her debut, director Karan Johar. Through the years, they have maintained a close, fun friendship. Which this image of the duo perfectly captures.

As Alia winks at the camera with a big grin, she shows off her slim figure in this black co-ord outfit. Matching a black top with a mini skirt, they revealed various cut-outs, revealing more of the star’s arms, stunning legs and slim torso.

She adds a pair of black heels, styled with pom poms to add a playful touch to the look. With her hair in sleek, straight waves, Alia looks on-trend in this stylish outfit.

After glancing through these 7 fashionable looks, it’s easy to see why Alia hails as a magnificent style star as well as an actress.

Her flawless style appears versatile and vibrant, as she can rock both edgy and pretty looks.

Check out more of Alia’s amazing looks on her Instagram.