7 Hot Looks of Ranveer Singh you Need to See

Ranveer Singh hails as one of the most fashionable, sexy Bollywood actors in modern times. Let’s take a look at his 7 hottest looks!

Despite the cloudy sky, Ranveer mananges to brighten the image with his sexy look.

Ranveer Singh has become one of Bollywood’s most popular actors. However, he also earned many fans for his unique fashion sense and hot looks.

2010 marked his debut into Indian cinema when Ranveer starred as the fun Bittoo Sharma in Band Baaja Baaraat. Impressing many in the romantic comedy, he even won Best Male Debut at the 56th Filmfare Awards.

Since this breakthrough role, he has continued to thrill fans. From Lootera (2013) to Bajirao Mastani (2015), Ranveer Singh has cemented his place in Bollywood cinema.

But while he isn’t making films, Ranveer continues to share with fans images of his impeccable style and buff figure. From gym workouts to wearing stylish suits, no wonder he has earned a loyal fan base!

Let’s take a look at some of his hottest looks. 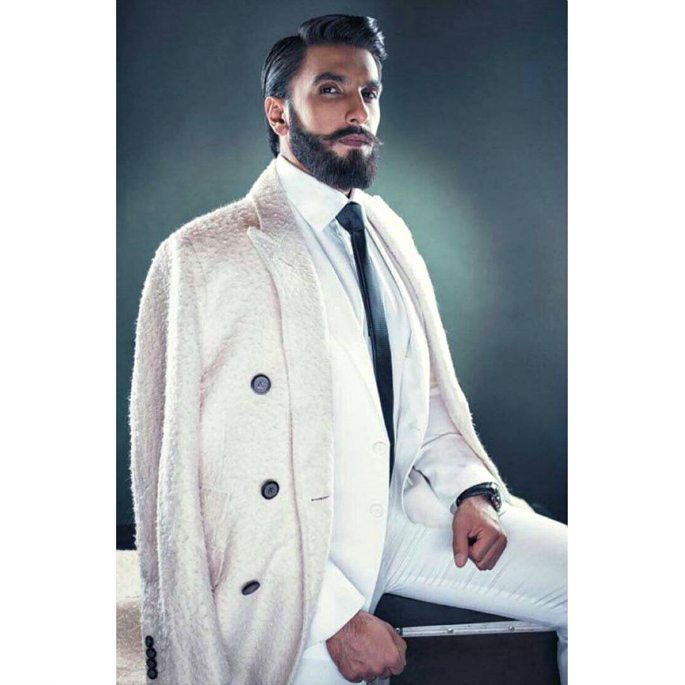 This impressive suit shows how Ranveer can deliver unmatchable style. He pairs a smart, white blazer and trousers with a crisp shirt. The actor accessories it with a simple black tie, with a watch strapped to his wrist.

He also adds an oversized, cream coat over his suit. Made with woollen fabric, it simply contains black buttons trailing down the chest and cuffs.

Gazing into the camera, the star smoulders with his hair slicked back in smart fashion. With his beard and moustache neatly trimmed, Ranveer cuts a sophisticated figure.

In this all-white co-ord, the actor stands out against the grey backdrop, stealing all his fans’ hearts. 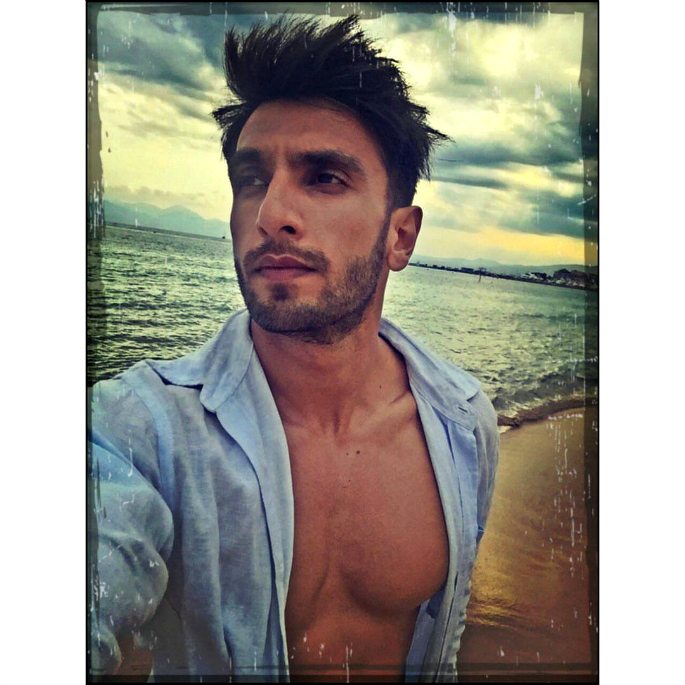 Ranveer teases fans with a glimpse of his flawlessly sculptured chest, covered with a relaxed, blue shirt. Unbuttoned all the way down, it serves as an ideal look for the summer.

Set against the backdrop of a gorgeous beach with an azure sea, one can see the Sun’s ray shining through the clouds. Despite the cloudy sky, Ranveer manages to brighten the image with his sexy look.

Taken before the days of his iconic beard, the Bollywood actor shows trimmed stubble. His hair, catching the breeze, lifts up, adding cool vibes to Ranveer’s look.

Twists on the old Classic 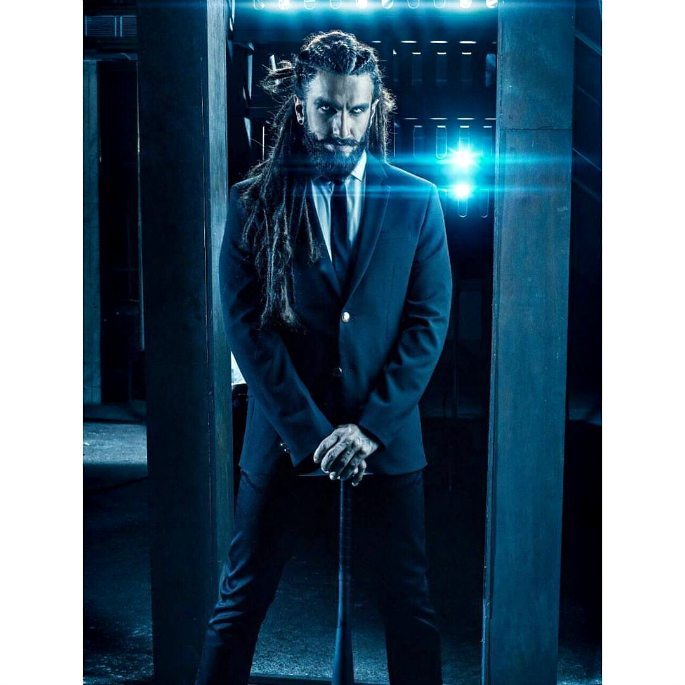 What an amazing look for the stylish Ranveer Singh! Donning a classic black suit, but updating it with a few twists.

The star, featuring in Jack Jones India‘s promotional song ‘Don’t Hold Back’, appears smart with this crisp suit. A black blazer and trouser co-ord, paired with a white shirt and black tie. Standing with a black cane, Ranveer cuts an intriguing, mysterious pose.

However, we love the edgy twists of styling his hair into long, black dreadlocks. His long beard immaculate, Ranveer styles his moustache to its famous curls.

With white eye contacts, this look shows the actor’s versatility in fashion. 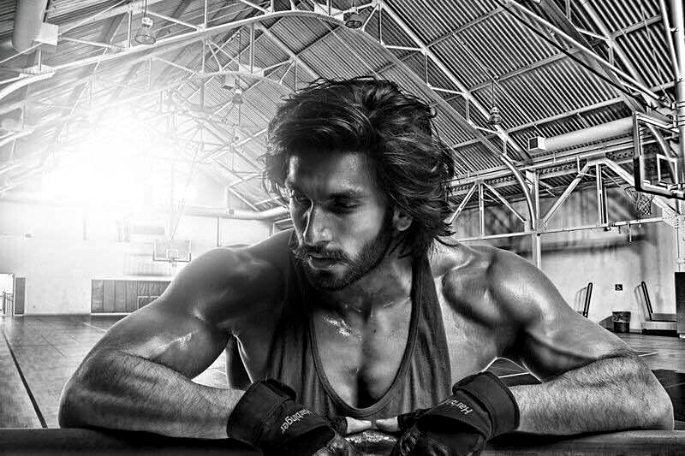 When this image first appeared on Instagram, Ranveer set hearts racing throughout his fan base. Posing in front of an indoor basketball court, the actor shows the jaw dropping results of his fitness regime.

Leaning against a bar, Ranveer wears a simple gym vest, showing off his well-defined biceps. With slight perspiration, one can gaze upon the star’s impressive muscles.

His long hair tousled flawlessly, the actor looks away from the camera, creating a captivating image. 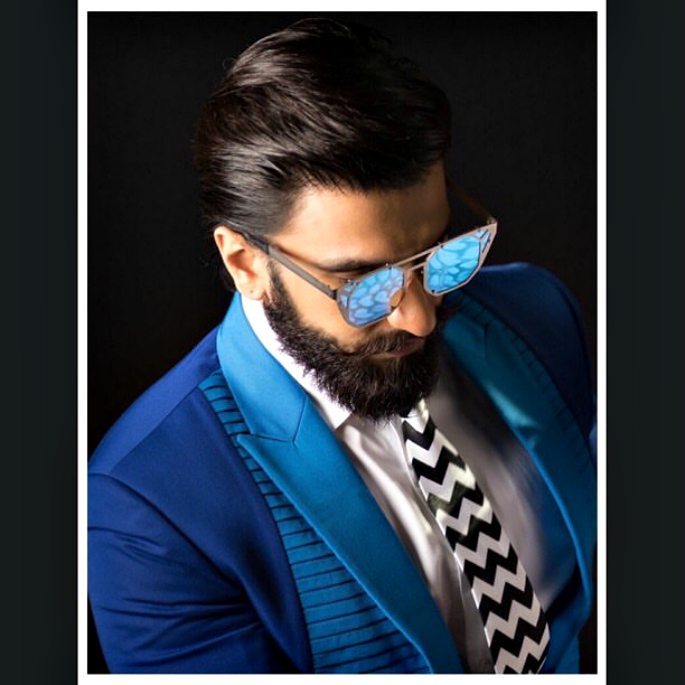 Another day, another suit. But in this image, Ranveer Singh shows off more of his unique fashion style.

This time, he dons a bright blue blazer, which containing a striped panel along the chest. The actor matches it with a smart, white shirt, along with a snazzy tie. Depicting a black-and-white colour scheme, it alternates between the colours in zig-zag lines.

Ranveer poses by looking down, his eyes covered with fresh sunglasses. Tinted turquoise with a grey frame, it adds an element of fun and quirkiness to this vibrant look.

Having Fun in the Sun 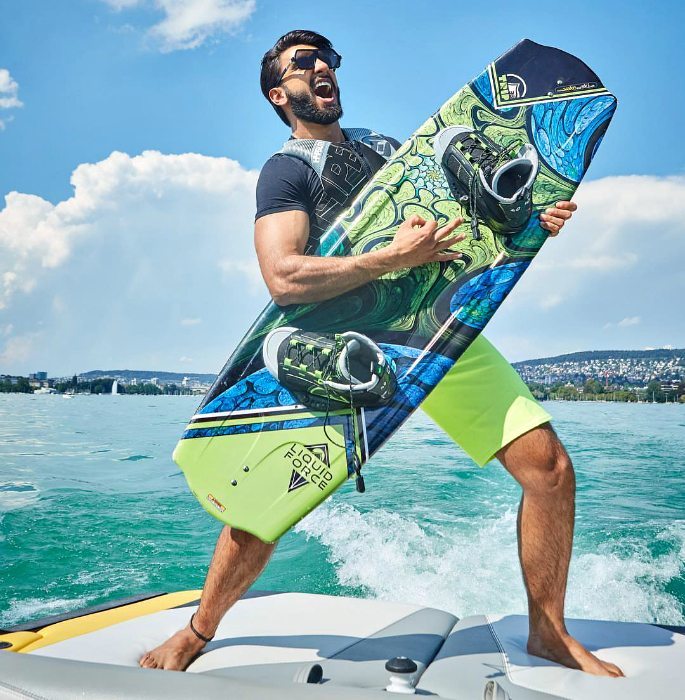 While the actor is regarded as one of the best in modern Bollywood, this hasn’t changed his charming, infectious personality. He knows when to wind down and have fun.

Take this image, for example, as Ranveer pulls off a fantastic ‘surfer dude’ look. Posing in the midst of crystal-clear Lake Zurich in Switzerland, the actor stands well balanced.

He holds a blue and green surfboard, giving us his best rock star pose, as he uses it for a ‘guitar’. Wearing a simple shirt with bright green shorts, he matches well with his surfboard.

We can’t help but love Ranveer’s comical antics when he tours across the globe! 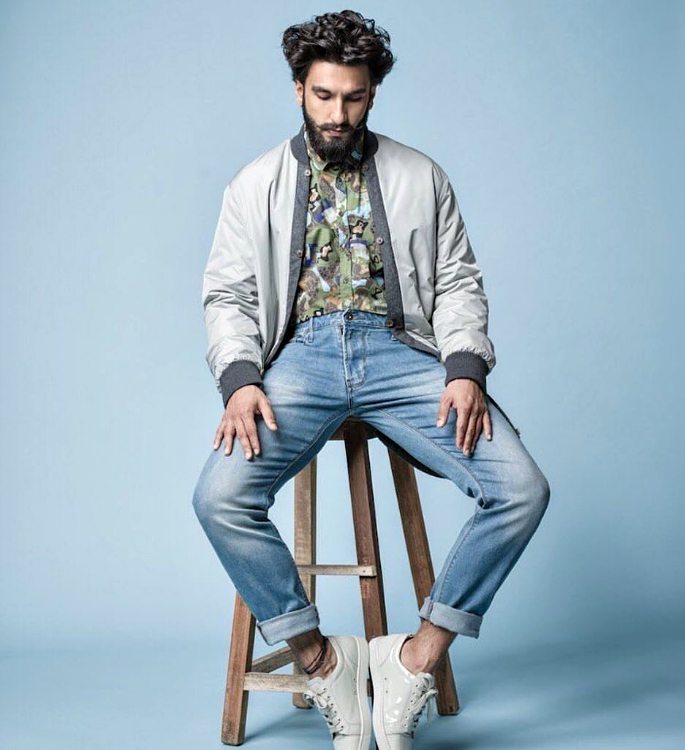 This image showcases a glimpse into Ranveer’s quirky fashion sense. As part of his photo shoot for Elle India, the actor matches a tasteful, multicoloured shirt with rolled up denim jeans.

With the intriguing shirt buttoned up to the collar, he throws a grey jacket on top. Its sheer material catches the bright light, illuminating the actor’s look.

He finishes the look with pure, white trainers, along with a brown ankle bracelet. Ranveer pulls off this contemporary outfit extremely well.

After glimmering through these 7 hot looks, it’s easy to see why Ranveer Singh hails as one of Bollywood’s fashionable actors.

Amazing in both smart and casual outfits, he always adds a touch of reinvention with his quirky style. And with his impressive figure, he sets pulses racing.

Keen to see more of Ranveer Singh’s outstanding looks? Why not check out his Instagram!