The IIFA Rocks event in Toronto during the IIFA weekend showcased high couture fashion from India and Canada. Featuring designers such as Sabyasachi, Vikram Phadnis,Vawk, Erdem and Arthur Mendonça, the fashion show delivered some stunning designs on the night worn by some of Bollywood’s top stars on the ramp.

A special design segment was presented by the Gitanjali group

The IIFA Rocks Fashion show took place on Friday June 24th 2011 in Toronto, right before the day of the actual IIFA awards. IIFA Rocks, held in the Ricoh Coliseum was filled with a fusion of high fashion, musical performances and also dance performances as various awards, such as the technical awards for IIFA were announced.

Prior to the day of the actual fashion show, the International Indian Film Academy had announced that three top international designers such as Sabyasachi, Rajesh Pratap Singh, and Vikram Phadnis would be show casing a collecton of their individual work, along with the Bay a Canadian sponsor featuring the local design talent of Vawk, Erdem, Arthur Mendonça and Wayne Clark at IIFA Rocks.

Before the show, Sabbas Joseph, Director, Wizcraft International, said: “As is typical of a land so culturally prosperous, India has a rich reservoir of traditional as well as contemporary fashion. Teaming up Indian designs with some of the most gifted fashion sensibilities in North America, IIFA Rocks will be a night of high couture. IIFA Rocks presented by The Bay is proud to provide an international platform for such talented designers and fashion labels.” 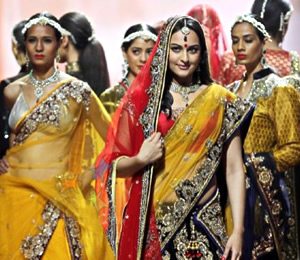 The show kicked off with two very popular and credible celebrities which go by the name of Karan Johar and Anushka Sharma. This was the very first time in which model and Bollywood actress Anushka Sharma had the opportunity to host such a tremendous event. However, IIFA award winning producer and director Karan Johar stepped up onto the stage for the second time for IIFA’s Fashion show. Johar had previously had the experience of hosting a similar fashion event in Bangkok, in the year of 2008. 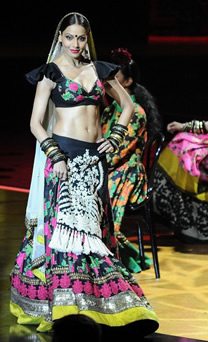 Throughout the entire show many celebrity appearances were made. For instance, Bipasha Basu and Sonakshi Sinha had the opportunity to walk the ramp and showcase jewellery created by Gitanjali. The beautiful Dia Mirza put on a magnificent dance melody performance which incorporated a variety of hits such as ‘Pyar Do, Pyar Lo’, ‘Parda Hai Parda’, and ‘Aapka Kya Hoga.’ Another celebrity that entertained the audience with a fun filled performance was Mallika Sherawat who put on an ‘Arabian Nights’ performance in a shimmering sexy pink outfit.

Bollywood music composers and directors Shankar Ehsaan Loy sang throughout the show, especially when models walked the runway and introduced the best of international couture and designer fashion.

Right before the day of the IIFA awards and also the second death anniversary of the King of Pop, Michael Jackson, IIFA Rocks had given the audience one exhilarating and momentous moment that will be remember for the rest of their lives. Sonu Nigaam, the very popular Bollywood playback and pop singer joined Jermaine Jackson, eldest brother of the late Michael Jackson in a duet. The two singers joined up and put together a phenomenal musical tribute to the legend and King of Pop.

Shahrukh Khan was at the show and presented a technical IIFA award to cinematographer Sudeep Chatterjee for ‘Guzaarish.’ The Bollywood superstar had his usual fun banter with co-hosts Karan Johar and Anushka Sharma. “I am tired of girls giving me a hug. I want a deep passionate kiss,” said SRK. He added, “I love Toronto. It is a beautiful city. Its women are beautiful.”

Watch highlights of the event in the IIFA Rocks video: 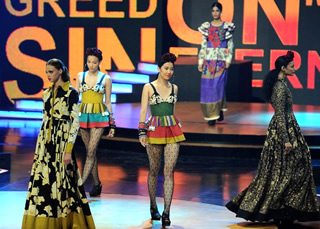 Later that evening, Sonu returned back on stage and gave the crowd a second performance which was filled with an interesting twist of qawwali music and as well as rock. RDB and Nindy were also part of this glitzy show.

Although entertainment was a huge part of the night, we can’t miss the focal point of the entire event, which is obviously fashion! Designers included, Sabyasachi, one of the top most leading Indian designers who is well known for his neo-traditional designs and is also a favourite designer for many actresses such as Rani Mukherjee and Vidya Balan, and Rajesh Pratap Singh, a Delhi based international designer is known for his savvy clean designs that feature a combination of both global and traditional pieces that continue to have unambiguous element in India. 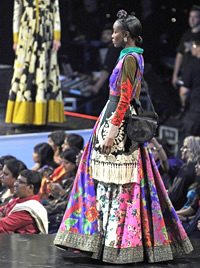 Both international designers presented the audience a fashion show filled with models that showcased a variety of different pieces throughout all of their collections. In addition, Sabyasachi had Bollywood’s “it” girl, Bipasha Basu walk down the runway wearing an exquisite design created by Sabyasachi himself. The third designer of the night was Vikram Phadnis.

A special design segment was presented by the Gitanjali group called “Gitanjali Jewels presents Nizam by Vikram Phadnis.” The collection was inspired by the beautiful and rich traditions of Indian royalty and evoking luxury of a defunct era.

Vikram Phadnis’s collection was all black and gold, and very Indian. Talking about the Toronto show Vikram said:

”I love the energy in Toronto and would love to come back. Though it’s been nothing but chaos, I simply love the atmosphere here.”

Also, the Gitanjali group put on a compelling feature which included the cast of the IIFA world premiere film, Double Dhamaal, followed by a performance by Parthiv Gohil.

All in all, the show was a successful hit. The night was filled with entertainment, high fashion, and celebrities.

With over 25,000 audience members and also a variety of different media sources, IIFA’s team has once again proven to not only the industry but the public itself that no matter where the location or what type of limits they are put under, they will always continue to the please the crowd and bring them what they want.

Check out our photo gallery of the 2011 IIFA Rocks event: