After the huge success in Sri Lanka, IIFA 2011 moves to Toronto in Canada. The three day event which includes the prestigious awards ceremony will be held in June 2011. Bollywood stars Anil Kapoor and Preity Zinta visited Toronto to make the announcement on behalf of IIFA.

"Toronto will be Bollywod central."

The International Indian Film Academy annual event will be held in Toronto, Canada, this year. Between the 23-25th June 2011, Toronto will be host to over 40,000 visitors to the city and more than 600 million television viewers around the world.

The IIFA’s are the biggest and iconic award ceremonies of the Bollywood calendar. This will be the first time the event will be held in North America. It’s reported that the province is giving IIFA $12 million towards the event out of its tourism budget. Toronto was chosen for its connections to film and film lovers, as shown each year by the prominence of the Toronto International Film Festival. 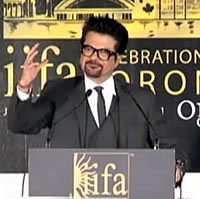 Anil Kapoor and Preity Zinta both attended the launch for for the 12th International Indian Film Academy Awards (IIFA) in Toronto. Anil said: “Toronto will be Bollywod central.”

Dressed in a smart three-piece suit, Anil addressed the audience and said: “Let me assure you that we will work closely with your team to create magic. IIFA Toronto will rock!.”

Preity said: “I think Canada’s going to be rocking this summer.”

At the welcome reception Zinta addressed everyone and said:

“Finally the IIFA has made it here and I think it’s going to be a real treat for the people because it’s not just about the awards. There’s so much cultural exchange.”

Preity holds Toronto close to her heart and added: “This is really special, this place, because I shot a really difficult film here called Heaven on Earth, with Deepa Mehta. It’s the film that got me my first international award.” 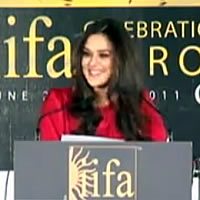 Being passionate about what Toronto and Canada offers to visitors, Zinta said: “Visiting Canada is like coming home.” And as for Bollywood stars coming to the IIFA’s this year, she said: “This year is going to be a lot of fun because most of the Indian celebrities are really excited to be coming to Toronto.”

Earlier, Ontario Premier, Darlton McGuinty warmly greeted Anil Kapoor at a special meeting to discuss the IIFA’s in Toronto. After meeting the Premier, Anil said: “Premier McGuinty and the Province of Ontario have welcomed Indian cinema with open arms. We are grateful for the unique honour and look forward to celebrating our oneness and building bridges with a country that has always welcomed South Asians.” 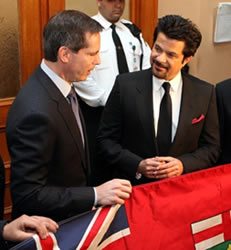 McGuinty said: “The weekend will build on the growing economic and cultural ties between our province and India and showcase Ontario to the world.”

The venue for the event will be the renowned Rogers Centre, which boasts the world’s first fully retractable roof which opens or closes in 20 minutes, has the capacity to accommodate up to 55,000 visitors for concerts and has previously hosted concerts by Bon Jovi and U2.

The three-day festival will include the awards ceremony, a world film premiere, a fashion show and community events in Toronto, Brampton, Mississauga and Markham. Director of Wizcraft, the organisers of IIFA, Sabbas Joseph promised three days of “glamour, glitz and splendour.” 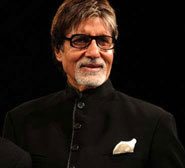 However, IIFA’s brand ambassador no longer seems to be in the position. Amitabh Bachchan has been IIFA’s brand ambassador for the past ten years since the awards began in 2000. On Twitter, Bachchan tweeted, “Not coming to Toronto IIFA. IIFA says my services are not required,” shocking fans and fraternity members. He even held the organizers responsible for his absence in Sri Lanka last year. “It’s the organizers of IIFA that do not want me in Toronto. Sri Lanka was the same,” he wrote.

In response, Sabbas Jospeh said in a statement: “Due to unexplainable reasons, after announcing the event as brand ambassador, Bachchan couldn’t participate in the IIFA weekend at Sri Lanka last year. Following this, IIFA aborted the concept of a brand ambassador.”

IIFA as a recognised annual Bollywood event now and every year raises the bar with a three day extravaganza bringing the venue location to life. Toronto which as a healthy community of people from South Asia, will be no different with the buzz of thousands of fans eager to get a glimpse of stars in their city.

Amit enjoys creative challenges and uses writing as a tool for revelation. He has major interest in news, current affairs, trends and cinema. He likes the quote: "Nothing in fine print is ever good news."
Autumn (Harud) by Aamir Bashir
Filmfare Awards 2011 Nominees