How far have British Asian women moved away from oppression? South Asian traditions had a huge influence in the 1960s on the Asian community in the UK. This meant that traditions and values restricted South Asian women to wear trendy western clothing. However, this is not the case today where Asian women are free to wear literally anything they choose.

South Asians from various castes and creeds flooded into Britain in the 1960s and 70s. Majority of them were from India, Pakistan, Sri Lanka and subsequently Kenya. Along with their culture their strong traditions and religious values travelled with them. However, Asians who came from Africa found it easier to adapt to Western society compared to those from South Asia.

In 1892 the trouser law was changed allowing women to wear trousers when riding or holding the handlebars of a bicycle. Shockingly, this ‘ridiculous’ law still exists today. But, despite the law women do wear trousers in Paris since it is the fashion capital of the world! 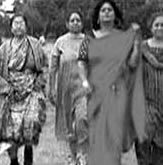 Britain in the 1970s families particularly from India and Pakistan were a lot more traditional. A wife’s place was solely in the home to cook, clean and of course breed! Women found it difficult to find work wearing traditional salwaar kameez and difficult to manage saris. This was impractical! The common jobs they could do were labour based including sewing, packing and factory work.

Along with mothers, daughters were not allowed to wear revealing clothes, make-up or go out socialising. Asian schoolgirls had to change out of their skirts into a salwaar kameez instantly. Western clothing was frowned upon no Asian woman would dare to wear skin fitted clothes. This was not part of South Asian tradition and any woman seen looking like this would be labelled as outcasts or ‘too modern.’ 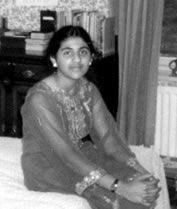 Young Asian girls were strictly not allowed to wear trousers to school 50 years ago. But, with the pressure from South Asian parents preaching about cultural and religious beliefs most schools accommodated girls to wear trousers. Despite the change some schools still oppose this social rule. For example, Catholic schools are forever against this change as it is believed that clothing symbolises gender.

Sonia, a 31 year old mother, remembers how she had to wear a long skirt all the way down to her ankles because she couldn’t wear trousers. Sonia attended an all girls secondary school in the Midlands in 1991. She says, “I felt uncomfortable wearing a skirt. It was not me! I was a ‘tomboy’ always wearing baggy clothes.” 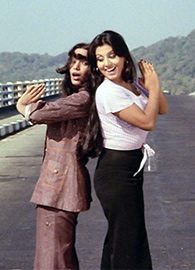 Bollywood played a huge part influencing fashion trends in the UK. Going back to the 1950s and 60s saris were very popular in Bollywood. This then faded and trailed to trousers starting with ‘bell bottoms’ that boomed in the 1970s. These funky wide trousers were popularised by many Bollywood Divas including Hema Malini and Neetu Singh. Both women and men wore such trousers as a major fashion statement for that time.

Pooja, a Birmingham nurse, claims it was only acceptable for young Asian women to wear bell bottoms because it was fashionable in Bollywood. She often wore bell bottoms with smart blazers and flower power blouses. These bottoms were not only seen in Bollywood, but Hollywood too!

As years went on Jeans also became popular in the 1970s. This hippy era meant that it was ‘hip’ to wear flared wide jeans with colourful printed tops and high platform shoes. Bollywood stars pranced around on our screens wearing them. Again, this had a huge impact on the western Asian society in the UK. Therefore, Bollywood was becoming much more westernised, as they started to mimic Hollywood and arguably still do today.

Now we commonly see different styles of jeans to suit various body types for women and men. Regular, bootcut, skinny, twisted among other crazy styles that are frequently found in our high street stores. Over the years women have become heavily ‘body conscious’ and now have a choice to wear what suits their figure. Skinny Jeans have repeatedly come back and fourth out of the fashion world for decades. Skinnies first made an appearance in the 1950s. However, due to South Asian traditions and values Asian girls could not wear such tight trousers.

But this is no longer the case. Asian women and young Asian girls are practically wearing all types of trousers from very loose to tremendously tight! In 2006, skinny jeans made a huge come back and remain popular in high branded stores. It is dramatically argued that skinnies are just made for skinnies. Some, often ‘big’ women find themselves feeling unattractive wearing such tight bottoms. Yet, it is a known fact that skinnies help to ‘suck in’ bellys and bums! 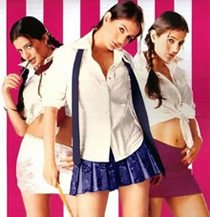 Does this mean that British Asian girls are now wearing trousers? No, instead it’s the complete opposite. Many young British Asian girls are seen to be wearing belts for skirts, door-knocker earrings and faces covered in full make-up. In some cases girls will leave home looking plain and magically get ‘dressed up.’ It is claimed that teenage girls ‘dress to impress’ to be socially accepted by boys. So, are skirts getting ridiculously short and replacing trousers altogether?

Nailsea School, near Bristol has recently banned girls from wearing skirts because they are getting shorter every year. It was debated that girls were taking less interest in curriculum activities. Therefore, would trousers be potentially more practical? Perhaps not when it comes to the choice of the girls, but definitely in the eyes of traditional parents.

Not all Asian females get away with wearing short skirts and some just don’t wish to because of respect for family, fear or their belief. Many women believe in self-dignity therefore cover themselves up and protect their modesty.

Sameera, a 27 year old workaholic prefers to wear smart trousers to work rather than fitted skirts. She says, “Skirts make my bum look too big!” This is the concern for some women in today’s day and age because women are becoming more and more ‘body conscious.’ 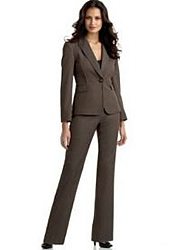 On the opposite gender side, some men’s point of view can be viewed completely different. Harry a 24 year old mechanic surprisingly likes to gaze at women in skirts than trendy trousers. He says, “Skirts emphasize a woman’s body figure and that to me is attractive! But, women who go OTT wearing the shortest of the shortest skirts I find disgraceful because I believe women need to look sexy and classy at the same time.”

As stated before not all women like wearing skirts, some actually prefer to wear trousers to appear ‘in charge,’ and be respected. A turning point took place in the mid 1980s when women began to ‘dress for success’ by wearing shoulder-padded suits and smart trousers. This gave women the freedom to power dress and to be taken more seriously in their workplace.

“Power dressing is an important asset in corporate businesses. Trousers make me feel empowered and less intimidated amongst male colleagues.”

What a woman wears says a lot about how she feels, how she wants to present her self and what she stands for as a person. Therefore, despite the evolving change, some women still feel they want to maintain their identity via their dress sense. For example, Baroness Sayeeda Warsi, the first Asian Tory chairwoman wears a traditional salwaar kameez to work. She has confidentially worn her custom attire right outside 10 Downing Street.

British Asian women have come very far from the 1960s from not allowed to wear tight revealing clothes to being able to wear almost nothing at all! However, some still proudly wear traditional attire to represent their culture and to uphold their dignity. But, are many young Asian women now becoming too westernised by turning a blind eye to their South Asian traditions?

Nazhat is an ambitious 'Desi' woman with interests in news and lifestyle. As a writer with a determined journalistic flair, she firmly believes in the motto "an investment in knowledge pays the best interest," by Benjamin Franklin.
2011 IIFA Rocks Fashion Show
New York Fashion Week 2011