5 Cute Photos of Taimur Khan that Make You Gaga

The son of Kareena Kapoor and Saif Ali Khan has become the most popular toddler of Bollywood. Let’s go gaga over these 5 cute photos of Taimur Khan!

With this adorable pose, no wonder the photo went viral and fans went completely gaga!

While only a young age, the son of Kareena Kapoor and Saif Ali Khan has turned into a popular star. The Indian paparazzi have already taken a vast amount of cute photos of Taimur Khan!

Whether he goes on travels with his mother or his nanny, many photographers are keen to take numerous snaps of the toddler. Each one transforms into a viral hit, gaining massive popularity on social media.

He’s even managed to gain a loyal fanbase, setting up accounts dedicated to the youngster. What a remarkable accomplishment for Taimur, who may wait many years before he makes his own Bollywood debut.

Let’s take a look through some of his cute photos that we totally adore. Guaranteed to make you go gaga over the cute boy. 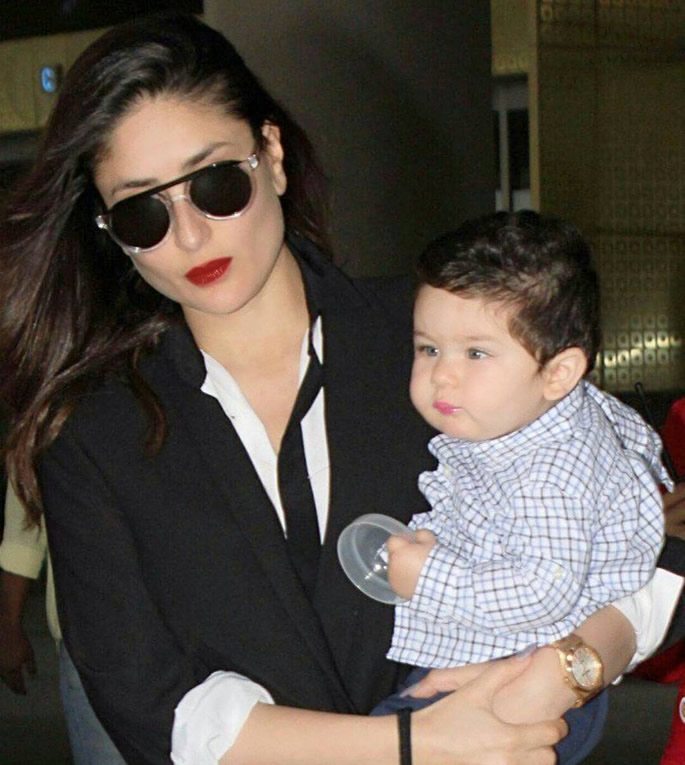 In this first image, Kareena holds her son in her arms as they walk past the Indian paparazzi. Wearing a blazer with a crisp, white shirt, she shows off her impeccable fashionista style.

It seems Taimur will also have the actress’ flawless taste in fashion. The youngster wears a striped shirt, with a criss-cross pattern of blue and black. He also wears a pair of jeans; a perfectly smart yet casual look for the toddler.

One hand clutches onto a plastic object; we wonder if it came from one of his toys. With his adorable cheeks and growing hair neatly styled, Taimur looks utterly cute in this photo. We wonder if he will continue showing more perfect looks in the future? 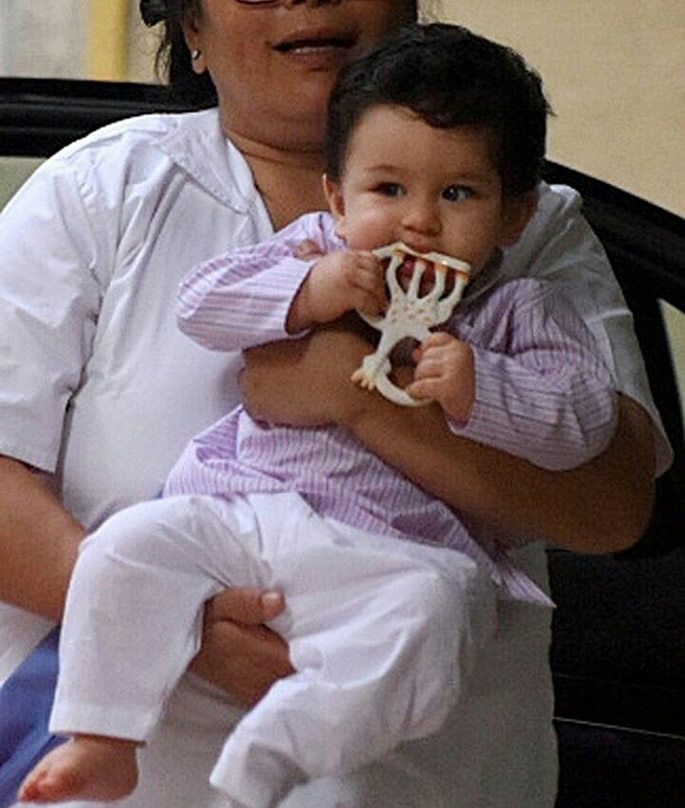 Another day, another striped shirt. This time, Taimur wears a crisp shirt that features pink and purple stripes. Untucked, it matches well with his white trousers. The young boy is held by his nanny, possibly after a travel in the car.

This image hails as a classic example of the toddler’s cute nature. Grasping a small toy in his hands, he holds it up to have a quick chew on it. It seems then Taimur is going through teething; a sign that he is simply growing up too fast!

With this adorable pose, no wonder the photo went viral and fans went completely gaga! 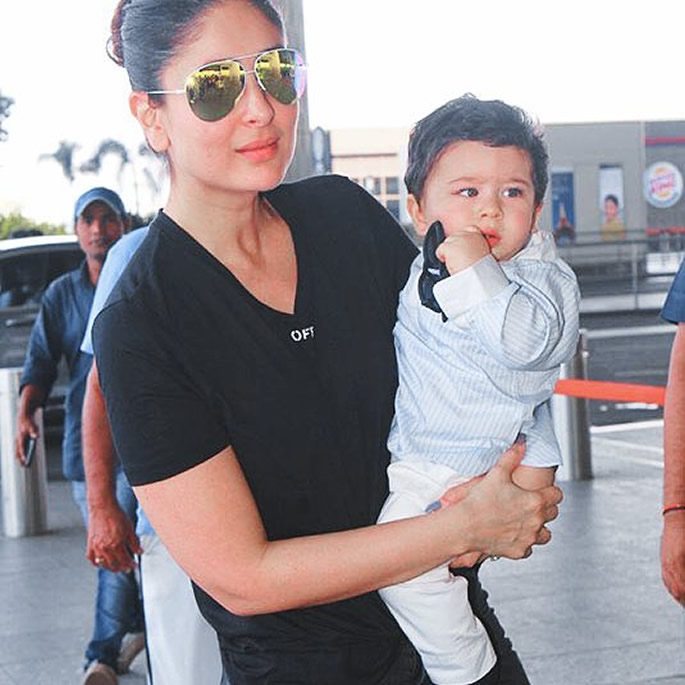 Bollywood stars now choose the airport for showcasing marvellous looks. And it seems the child stars are following suit. Take this example of Kareena and her young son, when they arrived at Mumbai airport.

Kareena keeps her look simple with a dark top. She also tyes her hair back into a simple bun and dons a pair of reflective sunglasses.

Meanwhile, Taimur gets all the attention with his charming look. He wears a blue, striped shirt with white trousers.

We love how Taimur holds his own pair of sunglasses. Taking after his mother, perhaps we will see them both donning similar looks in years to come? 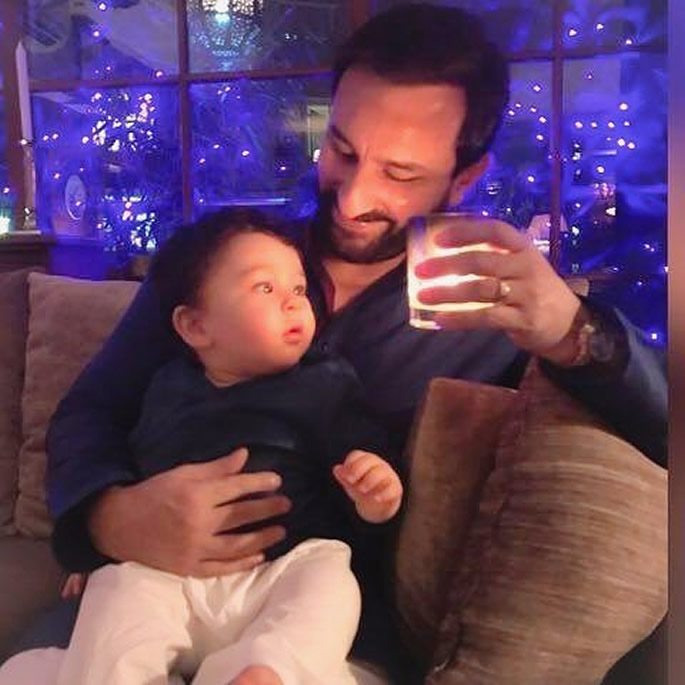 Taimur experienced his first Diwali back in mid-October 2017. While his mother and father donned outstanding outfits for the festival, the youngster also appeared delightful in his own look.

Sitting on Saif’s lap, they wear matching outfits. Both don dark blue kurtas with white trousers – making them look like twins! Saif also holds a candle, which Taimur looks upon with fascination. With bright, blue lights decorated outside, it hails as an impeccable image for Diwali.

We even reckon the toddler looks very similar to his father in the image. Particularly as they match with the same hairstyle too! 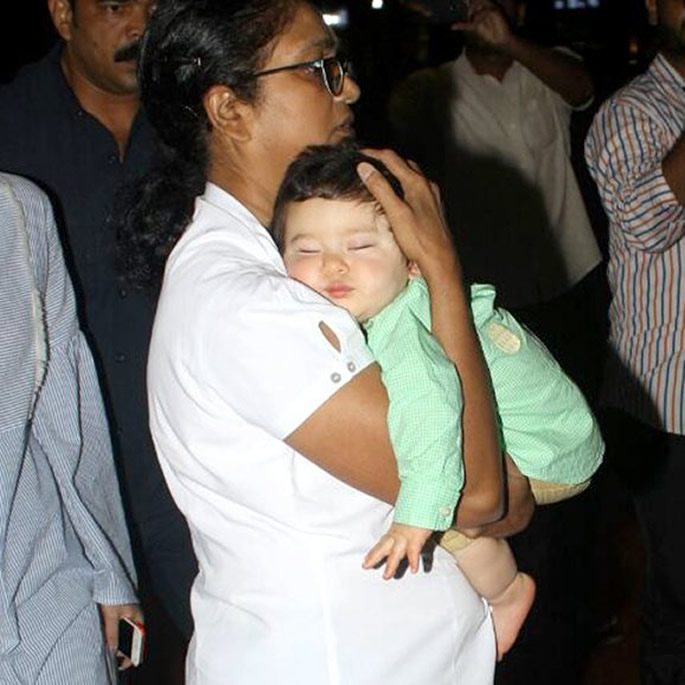 Arguably, we’ve saved the best image til last. As Taimur’s nanny carries him through a large crowd, the little toddler sleeps wistfully in her arms. What a lovely, sleeping angel!

The youngster wears a green shirt, along with yellow shorts; such a cute look for this charming, little boy.

Enjoying an evening nap, Tamiur relaxes in his nanny’s arms while Kareena walks by them. After she finished some scenes for Veere Di Wedding, it appears Taimur was more tired than his mother!

From all these images, Taimur is certainly growing up into an adorable, sweet boy. Despite the increasing attention, he doesn’t appear to mind all the fuss. Excellent news for fans as they can continue to go gaga over new photos, while Taimur looks content and happy.

He’ll soon approach a big milestone; his first birthday on 20th December 2017. But while many would naturally assume it will consist of a big bash, his aunt Karisma Kapoor revealed to Pink Villa that it would be more of a family occasion.

Regardless, we’re sure it will hail as a joyful event for all. Many fans will hope to see possible images of the birthday party, turning them into new, viral hits. But if you can’t wait for his birthday, why not take a look at more adorable pictures of Taimur here.