Pakistan defeated the West Indies by four wickets in the 5th and final One Day International at Gros Islet, St Lucia. Pakistan won the five match ODI series 3-1 in the West Indies.

"I'd like to appreciate Shahid Afridi here. He kept cool and got us over the line."

Pakistan returned to winning ways after beating West Indies by four wickets in the 5th and final One Day International at Gros Islet, St Lucia on July 24, 2013. Pakistan won the series 3-1, with West Indies pulling off a tie in the third ODI match.

With the series poised delicately at 2-1 to Pakistan, the hosts were under pressure in front of their boisterous home crowd. Pakistan were in a strong position where they could not lose the five match series.

Pakistan captain Misbah-ul-Haq won the toss at the Beausejour Stadium and elected to bowl. Considering Pakistan’s run chasing hadn’t been great of late, this was a tactical decision that clearly worked on this occasion.

With a slow but steady start, the home team were looking to get into a rhythm. The tourists however, had other ideas. Good disciplined bowling from Junaid Khan and Mohammad Irfan for the most part of the innings were key. 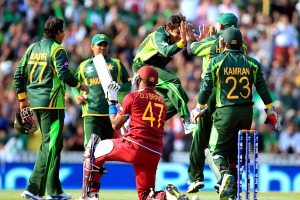 Khan got an early breakthrough with the wicket of Devon Smith in his first over. The buoyant Khan then sent Darren Bravo back to the pavilion after scoring only 9 runs, leaving the hosts at 44-2.

Mohammad Irfan then claimed the wicket of Johnson Charles [43], stopping any West Indies momentum. Before long, it was 98-3 and the hosts looked in a spot of bother.

Marlon Samuels [45] ticked along at a relatively slow pace, before he too was out . The usually reliable Chris Gayle seemed to be off his game as he scored only twenty runs from 34 balls.

With only eight overs remaining, the West Indies appeared to be struggling at 159-5. But then captain Dwayne Bravo not only steadied the ship, but threatened to destroy the Pakistan bowling attack, leading a rally of forty-eight runs from 27 balls. Former skipper Darren Sammy also impressed with an unbeaten twenty-nine off 18 balls. 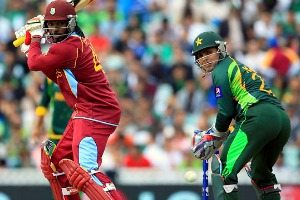 Super spinner Saeed Ajmal did give away more runs than he would have liked, but he did get in on the act by taking the wickets of Bravo and Lendl Simmons [25].

The West Indies late onslaught helped chalk up 242 runs from 50 overs. Khan was the pick of the Pakistan bowlers, claiming 3-48 in his ten over spell. He was well supported by Irfan who took two wickets with an excellent economy rate.

Chasing 243 runs to win the final match and series, Pakistan captain Misbah-ul-Haq knew exactly what was needed from his Green army on this bouncy St Lucia pitch, which had something to offer for everyone. 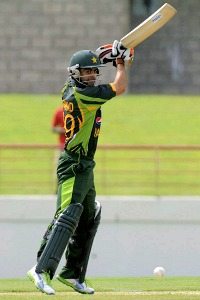 Sunil Narine was soon introduced, but to no avail. After a well-settled opening stand, Jamshed [23] was the first to go when a mix-up led to a run out by Chris Gayle. Hafeez [11] who had a poor series with the bat  followed Jamshed soon after, caught by Simmons off Sammy’s bowling.

Shehzad was joined by his skipper, Misbah. The pair consolidated the innings and restored confidence in the flag-waving Pakistan fans dotted around the stadium. Soon after Shehzad reached his half century, Misbah hit a fine boundary, taking Pakistan over the  hundred run mark.

The hosts brought back Best to stop the rot. But Shehzad smashed four consecutive boundaries off his bowling to silence the home crowd. Best finally managed to get the better of Shehzad as he was caught by Dwayne Bravo for sixty-four runs.

Dwayne Bravo gave away fourteen expensive runs in the 34th over, which put Pakistan in a comfortable position going in to the Power play.

With five wickets remaining, the tourists required eighty runs from ten overs. The pressure was clearly on the remaining batsmen to go on the offensive. Misbah and Umar Akmal [37] did just that with some aggression and rotating the strike.

Misbah had a close shave in the 43rd over, which could have changed the game. The West Indies appealed for a catch and requested a review. The third umpire decided in favour of the batsman and Misbah stayed on. 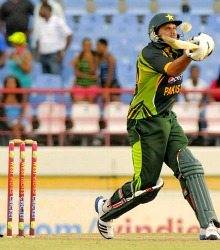 Rain interrupted play shortly after Akmal left the crease and could have turned the last match of the series into a dampener in more ways than one. The heavy downpour thankfully only lasted twenty minutes before both teams were ready again. Not least Shahid Afridi, who hit a crucial six and four off the penultimate over.

Pakistan could taste the sweet smell of victory, but not without a scare. Misbah [63] was caught by Dwayne Bravo at Mid-wicket off Holder’s bowling. Pakistan needed one run from four balls, with nerves of steel keeping Afridi and Ajmal alive. Ajmal nicked a tight single and sent the tourists to an emphatic four wicket victory with a ball to spare.

Afridi started and finished the series on a high. In the first ODI played at the Providence Stadium in Guyana, Afridi scored seventy-six runs and claimed 7-12. His bowling figures is  a record for Pakistan in ODI cricket and second behind the all time record held by Chaminda Vaas from Sri Lanka [8-19].

Analysing the match on PTV Sports, Former Pakistan Opener Mohsin Hassan Khan said: “I’d like to appreciate Shahid Afridi here. He kept cool and got us over the line. It has been a very good tour for Shahid.”

Man of the match and series Misbah summed up the game, saying: “I knew this pitch was really good to bat on, and if we kept batting till the end, nothing was impossible.”

“The bowling has obviously been our strength. Everybody bowled really well, which was the key in this win. Always tough to bowl first, especially in pressure games like this, but everybody was really positive, that we were going to chase well,” added the Pakistan captain.

“Today we lost, but the guys fought. Must congratulate Pakistan. The matches could have gone either way. We can’t fault the effort of the players. I liked how we believed right until the end.”

Pakistan and the West Indies now prepare to go head-to-head again on the weekend in the two T20 matches on July 27 and 28, 2013.

Rupen has been passionate about writing since childhood. Tanzanian born, Rupen grew up in London and also lived and studied in exotic India and vibrant Liverpool. His motto is: “Think positive and the rest will follow.”
Billionaire Shahid Khan buys Fulham Football Club
Pakistan win T20 series against West Indies