India has claimed the glory and won the test series against Australia. The series which held 4 matches in total saw India win all to take the tournament crown.

"You need to battle it out and that was the case in this series."

The final score was 4-0 at the end of match four of the India v Australia test series in India’s favour. The score line says it all. The Australians were whitewashed in the test series hosted by India.

The Indian team was able to pull of wins in all four test matches with style.

Captain M S Dhoni remarked: “It is a big boost to win 4-0 with this unit. Credit goes to every one. The last one and a half years has not been great for us in Tests, but they showed a lot of character, put in good performance and battled it out.”

It will go down as one of the most horrifying memories for the Australian skipper Michael Clark. He was the captain for the first three test matches against India.

“It took a lot of thinking because you had to look at your game and where you thought you could improve, what you had learnt and what you could do to help this team level this series,” Clarke said in reflection.

The Australian team lost all. Although Clark was still better than most of his team mates, the captain was not able to help his team by adding big scores on most of the occasions which is always expected from an experienced player of his class.

Additionally, Clark was dismissed by part-time spinner Ravindra Jadeja five times out of the six innings. He was once dismissed on a golden duck. To make things worse he also suffered from an injury which made him sit out the last test match. 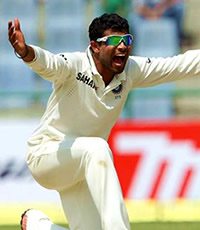 The Indian team showed some classic cricket skill under the captaincy of M S Dhoni and outplayed the Aussies in every department to get their hands on the Border Gavaskar trophy.

Indian spinners made full use of the turning tracks and took wickets in bundles.

Off-spinner R Ashwin bowled beautifully throughout the entire series. He tossed the ball and invited the batsmen to play. He got the ball to turn and bowled in the right areas. His effort got him the Man of the Series award as he went on to claim 29 wickets.

Part-time spinner R Jadeja was also very handy with the ball. He claimed a total of 24 wickets. Aussie skipper M Clark was his series bunny and he got him five out of six times. Jadeja also proved handy with the bat and added crucial 43 runs on a difficult Delhi pith and also won the Man of the Match award for his combined effort in batting and bowling in the last test match. 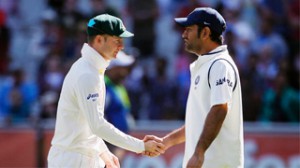 The Aussies won the toss all the four times but couldn’t make full use of it. Winning the toss is always important in spinning conditions because it is a daunting task to bat in the fourth innings on a crumbled pitch. But the Australian batsmen failed to pile up big totals to set a big target for the fourth innings. The men in blue were able to get the target quite easily even in the last innings. The Australians had to pay the price for poor shot selection and playing against the line.

India’s batsmen do deserve the credit as they batted with ease and didn’t get out due to poor shot selection. The Indian camp witnessed many marvellous centuries and the Indian skipper M S Dhoni and C A Pujara also added a double century each to their name.

“I think it was an important series for us, there were a few changes in the side. It was up to the individuals to rise up and do well. I think they all did it, everybody performed.”

“You need to battle it out and that was the case in this series,” Dhoni added. 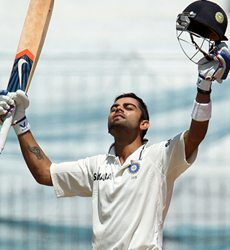 Shikhar Dhawan played a very fast and entertaining knock of 187 runs in his debut match at a strike rate of 107.5. It played a very important role in India winning the rain hit third test match. He was also judged Man of the Match for his beautiful effort.

While the Indian team will still be in the party mood after whitewashing a world class opponent, the Australians are under huge pressure as they prepare to face England in the upcoming Ashes series.

The Australian cricket legends have already stated that the team is hopeless. But the Aussies have proved in the past that they know how to make a comeback and it will be interesting to see how they perform.

Meanwhile, the Indian team finally gets a break from international duties and will be gearing up for the next glamorous season of Indian Premier League.

Amit is an engineer with a unique passion for writing. His life motto goes as “Success is not final and failure is not fatal. It is the courage to continue that counts.”
Blackburn Rovers in a Venky’s Mess
Boxer Vijender Singh in Heroin Scandal