Australia landed in India as one of the world’s best cricketing nations but did they have any clue that they will fail so miserably against the spinning Indian tracks? Aussies lost both of the first two test matches and are now trailing in the series.

The spinners have proved their dominance clearly

The Australian cricket team is in India for a four match test series. The Indians have got an unassailable lead of 2-0 by winning the first two matches. They are looking good to win more. The Australians on the other hand are low on confidence. Their shoulders are down as they failed in both batting as well as bowling.

The pressure on the Australian team was already mounting high when another bad news broke in. Four of their key players were found guilty of violation of team discipline and have been suspended.

The players are: Vice Captain Shane Watson, M Johnson, Usman Khawaja and James Pattinson. It puts the Australian selection board in an awkward position as they have no options but to select their playing eleven from a list of just 13 available players.

Both the matches played till now have been one sided affairs. The men in blue have proved their dominance with back to back wins. Both of the wins have come with big margins. The Indian team won the first match by eight wickets. The margin of victory was even bigger for the second match rising to an innings and 135 runs. 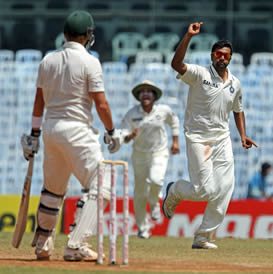 The Aussies have clearly not been able to adjust to the Indian conditions. Their top order has been done by the Indian bowlers. The Australian batters have failed to read the Indian spin bowling. Skipper Michael Clark has been the only one to keep the scoreboard ticking. He has added a total of 268 runs. He also made a beautiful century in the first innings of the First test match. It was the only innings the Aussies were able to cross the milestone of 250 runs.

It is unfortunate for the Australian team that except the skipper rest of the batsmen have not been able to find their rhythm. On most occasions they were out due to poor shot selection. They couldn’t impose themselves on the Indian bowlers, especially spinners.

While the Australians are still trying finding a good coordination, the Indian camp would be very pleased with their efforts. Most of the Indian batsmen have been able to add runs to the board. Indian skipper M S Dhoni has scored 268 runs in just two innings with his best knock being 224. His double century came in the first innings of the first test match which helped India reach a massive total of 572.

Indian opening batsman C Pujara has also been in a scoring mood lately. His knock of 204 which scripted a huge second wicket stand of 370 runs with M Vijay helped India defeat the Australians in the second test match played at Rajiv Gandhi International Stadium in Hyderabad. Virat Kohli has also struck a well deserving century in this series.

The only worry for the otherwise satisfactory Indian batting department has been Virendra Sehwag. The Indian opener’s poor run continued in the first two matches as well.

Known worldwide for his beautiful hand and eye coordination, Virendra Sehwag has been dropped from the next test match by the selection board. The decision has already attracted a lot of controversy. 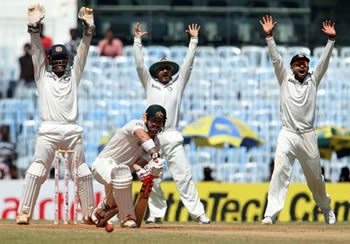 Many former Indian players have protested this decision. This decision is also being viewed as a consequence of the blasting opener’s differences with the Indian skipper M S Dhoni. Many experts feel that Sehwag should have been given a few more opportunities to prove himself before being axed.

The Indian bowlers are playing their part well. They have been able to chip wickets and break partnerships at curtail moments. The spinners have proved their dominance clearly. Ashwin has scalped 18 wickets in four innings so far and his performance has been impressive. Even all rounder Jadeja has proved handy with the ball. He gave 11 blows to the Australians with an excellent bowling average of 19.

On the other hand the Australian camp is having bowling worries. The Australian spin department has also been very disappointing. While the Indian spinners have been able to extract spin from the pitch, the Australians have failed to do so. Their line and length is inconsistent and they are not feeling confident enough to flight the ball.

The third test match was scheduled to commence from 14th March but was washed out due to heavy rain.

On the second day the game started well for the Aussies. The openers did a good job and added 139 runs for the first wicket. But after the fall of first wicket, things went haywire for the Aussies and they lost seven wickets by the end of the day.

Skipper Clark promoted himself up the order but couldn’t even open his account. He got out on a golden duck when he was stumped by Dhoni on Jadeja’s delivery. The score of the Australian team at the end of day 2 was resting at 273 for the loss of seven wickets.

India is once again looking good to win the third test as well unless rain spoils the game which has already consumed a full day. If rain disturbs the game again significantly the match will surely end in a draw. Unless something magical happens there is no way the Australian team can win this match. With just one match remaining after this one, India is all set to win the series.

Amit is an engineer with a unique passion for writing. His life motto goes as “Success is not final and failure is not fatal. It is the courage to continue that counts.”
Cricket is the Sport for Salma Bi
Blackburn Rovers in a Venky’s Mess